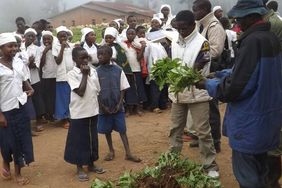 In 2008, a cry for help came from the Mount Tshiaberimu area due to a rush of people cutting wood and producing charcoal. The profitability of this activity attracts the involvement of the majority of the local communities. Subsistence farming, which is practised on very small parcels of family land (usually less than half a hectare), no longer meets the households' basic needs. Several hectares of forest are cut each month for charcoal making. The charcoal is sold in large urban centres such as Kyondo, Butembo, Masereka and Luotu. This activity is flourishing and the landscape has started to be transformed: some hills are losing their forest cover and are becoming bare. If nothing is done, the forest of the park, which forms the habitat of the gorillas, will soon be invaded for the same purpose. It is better to prevent than to cure; a direct, mitigating solution needs to be found before a sustainable strategy can be implemented.

Profiting from a relatively solid loc­al infrastructure, a community re­forestation project was initiated in Vuswagha Village in 2008. It was called SAGOT, which stands for "Solidarity of the Friends of the Mount Tshiaberimu Gorillas". The success of this project, which produced 35,000 plants in one season, was very visible and its impact could be detected among the community students. Two years later, a new reforestation strategy was initiated, mobilising schools for the production of seedlings: the profitability of this activity is three to four times greater in schools than if undertaken by other reforestation partners. School nurseries help to sensitize school children and their parents to reforestation, train children in the management of nurseries, and raise young people’s awareness of the benefits of the forest from a very early age. They encourage disadvantaged children to continue their education, help to restore the environment, maintain good climate conditions and, finally, support the local economy.

In 2010, Berggorilla & Regenwald Direkthilfe funded a pilot reforestation project in 3 schools in the Mount Tshiaberimu area and 3 close to the Sarambwe Reserve - two places where gorillas occur. The same activity was funded in 3 more schools in 2011, giving a total of 9 schools, 6 of which were in the Mount Tshiaberimu area. Seedling production was expected to reach 8,000 plants per school per year, providing for an estimated reforestation area of between 20 and 24 hectares each year in the area of Mount Tshiaberimu and between 10 and 12 hectares in Sarambwe. Unfortunately for Sarambwe, the project could not be continued there for a third year due to the insecurity caused by armed rebel bands such as the M23, the Mai Mai and the Nyatura.

The success achieved by the participating schools in the Mount Tshiaberimu area (Vurusi Institute and the primary schools of Kisanga, Tuvuke, Ighomya, Kitolu and El Shadai) and the presence of a project focal point have prompted requests from other stakeholders, especially influential ones such as the Catholic parish of Kyondo and the Vurusi Health Centre, who would like to be added to the list of plant producers.

The result of the project was an unexpected, exponentially increased level of seedling production. During the first year, the 3 primary schools produced 44,000 plants, 183% of what was expected. During the second year, 229,135 plants were produced, of which 51,135 were produced by the Sarambwe schools. During the third year, production in the Mount Tshiaberimu area increased to 541,510 plants for the 6 schools and the two new partners (Kyondo Parish and the Vurusi Health Centre). As the project had a duration of 3 years, the 3 primary schools were not included during the fourth year, leaving the last three schools and the two new partners mentioned above. During the first season of the fourth year, 127,000 plants were produced and currently, 300,000 are in the nurseries waiting for distribution. We hope to distribute at least 80% of these plants, i.e. 240,000 seedlings, between October and the beginning of December 2014. The total production of the project will have been 1,130,510 plants over the 4 years.

Of course the seedlings are distributed over several fields, but one can see plantations in certain locations which are intended to form copses or small-scale reforestation. Planting activities in villagers' fields are not monitored, but it is estimated that a minimum area of between 500 and 600 hectares will be planted.

Reforestation for Profit and to Mitigate Climate Change

Inspired by the initiatives of the Gorilla Organization (GO) at the end of 2010, in 2011 and at the start of 2012, and as a response to the request of the target group of the school nurseries project and owners of private or community plantations, a project to plant passion fruit plants will be initiated. The fruit plants will be introduced within the plantations set up by the project. The objective of this project is the production of passion fruit with a view to generating a tangible income for the community.

The passion fruit planting project was initiated from 2010-2012 by the Gorilla Organization in two villages, Vuswagha and Kyndo-mowa, villages that had already benefited from the B&RD reforestation project in 2008. The trees planted during the earlier project served as support for the passion fruit, which is a climbing vine. In Vuswagha, 10 people profited from the project. In Kyondo-mowa, 7 families were beneficiaries. In 2013, 10 sacks of fruit were produced every week in Vuswagha. Each sack can produce up to 100 litres of passion fruit juice and sells for 60 USD. In this way, the household income of the passion fruit producers increased to 240 USD per month, a credible amount for the villagers of these regions, an amount that will help reduce activities leading to destroying of the trees and poaching.

There is a large market for passion fruit in the region. Local restaurants offering passion fruit juice are widespread and all need fruit. The demand of these restaurants is large and production is still small. The locally visible benefits attract more people to the passion fruit project and requests are made frequently to the B&RD focal point who does not hesitate to make suggestions to the B&RD representative. The initiative is financed quickly, not only because it gives the local communities an income, but especially for beneficial effects the project has for the environment: plantation maintenance, the conservation of the forests where gorillas occur and the sensitization of people to gorilla conservation.

Charcoal making, poaching and timber cutting occur mainly because people are trying to earn money or finding ways to support themselves. Passion fruit has given people an alternative solution to this problem. For passion fruit to do well, the trees that support the passion fruit plants need to be protected, which prevents the trees from being cut down. Maintaining the afforested areas helps to maintain good climatic conditions which helps the fight against local climate change and supports carbon sequestration. This project, initiated by the partners of ICCN, has become a foundation for the sensitization of people to the protection of gorillas as without them the project would not exist.

Four nurseries have been established close to important afforestation areas that have resulted from the school nursery project at Vurusi, Ngitse, Kitolu and Katsimbi. Currently, 10,000 passion fruit seedlings are being distributed. A strong sensitization campaign has been initiated by GO staff and the team in charge of the nurseries, and has been implemented by the B&RD focal point in collaboration with GO, Kyondo Parish, a local member of the NGO VONA, local schools and the Vurusi Health Centre. This campaign aims to inform as many people as possible about the project in order to attract more beneficiaries.