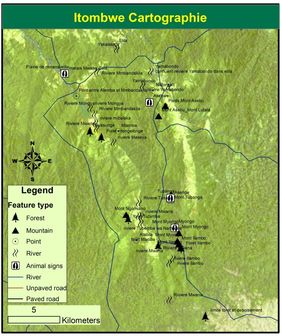 Map of Mwana Valley in Itombwe. It shows the locations of wildlife, forests, wildlife and key ecosystems in the entire valley.

Despite these scientific efforts, the area was not gazetted until early 2006, though its gazettement was contested by local communities (Kujirakwinja et al. 2010, 2015). The contestations were meant to express anger about the disruption of the participatory process for the gazettement of the area. In 2008, conservation agencies and the civil society resumed the dialogue and developed a comprehensive plan to gazette the area with the involvement of communities and local leaders (Mubalama et al. 2013; Kujirakwinja et al. 2015). Although the agreed boundaries have been legally recognized by the DRC government, there are some areas within the reserve that are known to have conflicting land uses for wildlife and communities' needs. These zones include Mwana Valley and Zombe region.

In order to solve such issues, the joint planning consortium for Itombwe (cadre conjoint) agreed to test a participatory zoning process for specific regions with communities. The Wildlife Conservation Society (WCS) developed a comprehensive zoning plan strategy that was later on tested on the ground together with local organizations and structures (RACCOMI, RACOD, IGH and AJIPD). The process resulted in an agreement for protecting the area through zoning neighbouring forests to community settlements.

Shared Land between Wildlife and Communities

For ages, local communities have been living together with wildlife and the access to bushmeat was regulated by the traditional chief through customary laws and rules (Rodary et al. 2003). In Itombwe area, for example, hunting for gorillas and chimpanzees was prohibited and was mainly conducted for cultural ceremonies. Hunting for other species is thought to be regulated through traditional rules and beliefs. For the region, some species were protected by taboos and spiritual beliefs. Wildlife was therefore part of communities’ life and spirit (Cioc 2009). They shared the same forest and land, though they were hunting some of the species for subsistence and related uses (Rodary et al. 2003). That was the case of Mwana Valley in the Itombwe Massif.

Biological research and prospection identified Mwana Valley as one of the important regions for great apes and large mammals in the Itombwe area, though the area was also occupied by people (Plumptre et al. 2009; Kujirakwinja et al. 2010). Due to changes in land use and rights, the Itombwe Massif is facing forest degradation and species depletion in most areas. Key drivers are thought to be timber exploitation, conversion of forest into farming and pasture, artisanal mining, and bushmeat (Kirkby et al. 2015; Plumptre et al. 2016). Despite these changes, Mwana Valley is still one of the key areas for gorilla and chimpanzee conservation as the forest surrounding settled areas has a higher number of great apes than other areas (Mubalama et al. 2008; Plumptre et al. 2016).

Given the "conflicting" interest of the area (human and wildlife needs), WCS and others decided to work with communities to develop an agreed land-use plan that includes conservation of great apes, local access to resources, and human development zones (Plumptre et al. 2013). The process took about two years as it involved field work for data collection, negotiation between conservation actors, local NGOs and local communities, and validation by provincial leaders.

Conservation researchers have recognized the need for innovative approaches and strategies to maintain biodiversity through stakeholders' involvement (Berkes & Turner 2006). In the eastern DRC, for example, whilst conservation interventions were mainly ignoring the role of communities in forestry planning and management, current practices have recognized that minimizing conflicts with communities by involving them in various processes can sustain critical habitats and wildlife (Kujirakwinja et al. 2010).

There are various resources for participatory mapping, aiming at ensuring that communities and experts work together to define different land uses to respond to different needs within the same landscape. For the case of Mwana, the process included (International Fund For Agricultural Development 2009):

To ensure that these activities do not generate conflicts, their implementation was monitored and regular adjustments were made to accommodate controversial views. These are done through reporting and planning meetings (Hammill et al. 2009).

Local support from communities and traditional chiefs: Traditional chiefs have power over their communities and, to some extent, over land. In Itombwe, however, land rights holders are located at family level, where most discussions have to happen and be validated by the chief. There were three meetings held with traditional chiefs: the first, to agree on the process and commit themselves to support the process; the second meeting aimed at reporting on the progress; and the last to validate the map that was generated throughout the field mapping. Most fieldwork was conducted with local representatives chosen by local chiefs and their committee; thus, the process was supported by communities, besides some pitfalls identified by local community organizations that were involved later on in the process.

Multiple use map for Mwana valley: Through the participatory process, a generic map produced at field level was integrated into GIS to get a comprehensive map that shows different zones and their uses. Through the exercise, communities indicated areas where they know great apes are found, and identified those areas as protected by local chiefs. Therefore, meetings with communities localized areas where they usually collect resources - including hunting and honey collection. Changes were made to the maps to ensure that corridors between conservation zones are established and hunting zones are located near villages.

The validation of the map was done at provincial level to ensure that key stakeholders are aware of the ongoing work on the ground. Communities were motivated by the zoning as a way not only to protect key great apes but also as a potential for the development of the area given its level of poverty and vulnerability. To ensure that communities are involved in the management of the area, a local community management unit was put in place and rights to access resources were established and enforced.

Traditional chiefs and local leaders are keys for most conservation interventions in isolated areas. Despite the specificities of areas as far as land rights are concerned, they symbolize local culture and can help to ensure that different needs converge.

At the local level in conflict and post-conflict situations, cooperation between international NGOs, national agencies and local NGOs can be a better way of making changes at the field level by sharing power and activities to be implemented. Local NGOs are mainly led by natives from these areas, and they have better knowledge of local issues and key stakeholders.

Monitoring social and sociological impacts of conservation interventions in such processes is important as it helps to tackle controversies and respond to conflicting interests by involving more stakeholders. Therefore, there is need for understanding individual interests and power to ensure that these factors do not block the process or are used against conservation and local communities' will by local elites.

Itombwe Nature Reserve is recognized as one of the hotspots of the world. It is recognized as one of the most important conservation sites in the Albertine Rift both for its number of species and for its endemics. This motivated biologists and conservationists to conduct field research and support its legal gazettement process. The latter was proposed as long ago as the late 1960s and was informally launched in the early 2000s. Its gazettement in 2006 has been updated with a 2016 provincial decision recognizing boundaries established with communities. Although these boundaries include conservation and multiple uses, some areas contiguous to human settlements have key species such as gorilla, chimpanzee and elephant.

After identifying these areas, participatory mapping was conducted in Mwana Valley to identify key areas that should not be deforested and should suffer minimum human impact regarding hunting, forest product collection and human settlements. Together with communities and local stakeholders, the area has been divided into different zones: conservation, human settlement, development (farming and pasture) and hunting zones.

Main challenges to the implementation of this plan are ensuring that conservation interventions include social interventions, as the area is isolated and its population is among the poorest in the Albertine Rift. Key interventions to ensure sustainable use of resources in this area included surveys in conservation zones, regular wildlife monitoring, environmental education and social development activities such as sustainable agriculture, beekeeping, and construction of schools and health centres.

These activities were funded by the IUCN-SOS, Critical Ecosystem Partnership Funds, Rainforest Trust Foundation and Berggorilla & Regenwald Direkthilfe. We are also grateful for the support of the members of the Cadre conjoint (Leonard Mubalama - WWF, Jean de Dieu Wasso - Africapacity) for being involved in meetings and technical advice. We are grateful to Andrew Plumptre, Andrew Kirkby and Guillain Mitamba for the technical support and mapping.

Kujirakwinja, D. et al. (2010): Healing the Rift: Peacebuilding in and around protected areas in the Democratic Republic of Congo’s Albertine Rift. New York