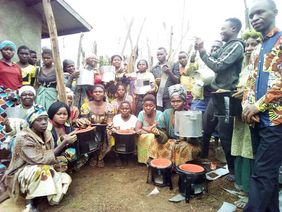 The participants after the training (© Kasereka Neema Gervais)

Efficient charcoal-fired stoves have been in use throughout the eastern Democratic Republic of the Congo for more than a decade. Everyone is convinced of the efficiency of these stoves. Traditional stoves use twice as much charcoal as these improved stoves. For example, a household using 5 to 6 bags (40 kg each) of charcoal per month in a traditional stove can reduce consumption to 2.5 to 3 bags with an improved stove. A 40 kg bag of charcoal costs USD 15, so rather than spending USD 90 for 6 bags, households using efficient stoves will save USD 45 each month.

This type of fuel-efficient stove can be used for more than three years. It is topped by a metal plate but the body of the stove, where charcoal is burnt, is made of clay. The clay can be replaced and is much cheaper. The price of a good stove ranges between USD 25 and USD 55. The most common stoves cost between USD 5 and USD 15 and the price is decreasing. Traditional stoves cost up to USD 2 with a lifetime of up to six months, but are well known, so they sell easily.

We have initiated a project for the manufacture of improved stoves around Mount Tshiaberimu (or Tshiabirimu) that was funded by Berggorilla & Regenwald Direkthilfe with a donation from the Gaia Nature Fund. The project goal is to enable the surrounding population to benefit from their introduction, to add value to the plantations that were established in the past, and to reduce the need for collecting firewood in the park. The current results of the project are as follows:

As to the project's goal, the population benefits in two ways: they use the stoves themselves, thereby reducing their consumption of charcoal, and they sell them. This may partly explain why, from October 2020 to March 2021, rangers and trackers observed no collection of firewood in the area where they work. However, they did observe 26 cases of bamboo being cut. Sixteen were related to poaching, in each case 1-4 bamboo poles were cut to set traps. In the remaining 10 cases, bamboo was cut to make baskets or to be used in construction.

The fact that no cutting of firewood was observed can be explained in several ways. In 2016 and 2017, Berggorilla & Regenwald Direkthilfe funded a project that produced and planted 14,000 seedlings around Mount Tshiaberimu. This project was coupled with sensitisation and information activities on gorilla conservation and nature protection. From 2011 to 2014, a large school nursery project allowed almost the entire population around Mount Tshiaberimu to establish small tree plantations, and this is where the people now obtain the wood and charcoal that they need. The project for the manufacture of improved stoves will allow these tree plantations to be maintained in the long term as the use of the improved stoves allows for a minimal consumption of charcoal.