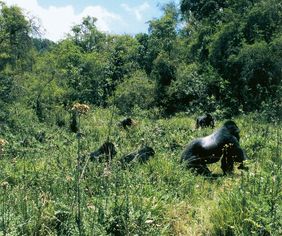 One of the Karisoke study groups: the Susa group (© Cyril Grüter)

It is 50 years now that Dian Fossey established the Karisoke Research Center to study the little known mountain gorillas in the Volcanoes National Park in Rwanda. She would have done everything to protect the gorillas she had known so closely during her many research years living near them. But she loved these animals more than humans. Stories go that she not only pursued the poachers without mercy, she was also rude with the staff who worked in the camp. Similarly, she was always in trouble with governmental representatives because she often announced to reveal facts about corruption and smuggling in the area. Therefore, local people feared rather than loved her. In the end, she paid the price. On 26 December 1985 the world famous scientist was killed in her remote cabin in the Virunga mountains. The crime has never been solved.

Dian Fossey was an American with no experience in studying wild animals. She worked as a therapist for children when the anthropologist Louis Leakey was looking for a brave young woman to study mountain gorillas in the late 1960s. Who would have believed that she was the right person to save this species? By 1973 the population of the famous great apes in the Virunga mountains had fallen below 275; today - thanks to extreme conservation measures - their number has risen to about 480. Dian Fossey laid the groundwork on which this success is based. Constant monitoring, intensive anti-poaching efforts, and emergency veterinary interventions have led to an increase in the mountain gorilla population. Studies at the research site Karisoke have transformed the world's understanding about gorillas and provided critical information for developing conservation strategies. After her death, the Dian Fossey Gorilla Fund continued this work - to fulfil her legacy.

Not to forget is the impact of tourism. In the beginning of the 1980s Dian Fossey had to return to her old world because her visa had not been renewed by the Rwandan authorities. She used this time to give talks and spread the idea of saving the gorillas in Africa. Much money was needed for this aim and when the audience heard her happy or sad gorilla stories they pulled out their check books. When Dian came back to the Virunga mountains three years later, she was shocked to see so many tourists watching her wild friends. But these travellers brought dollars into the poor country. Gorilla trekking has become the mainstay of the Rwandan tourism industry, which brought in USD 367 million to the country in 2015. The park shares 10 percent of its revenue with local communities. Thanks to this revenue-sharing plan the Rwandan government fully supported gorilla protection. On the other hand, it is important that the local communities understand the value of the national park. The mountain gorilla numbers are still low - 880 individuals altogether - and they are among the most-endangered mammals. Therefore, it remains urgent to raise money and awareness to support wild gorilla conservation and to strengthen the international campaign for saving the big apes from extinction. For all of us.