Conservation and Sensitization Activities at Sarambwe Reserve: April 2016 to March 2017 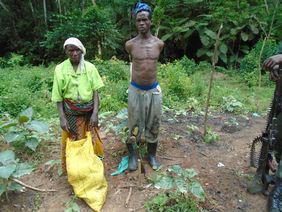 In the Sarambwe Reserve, conservation and sensitization activities have been carried out mainly by the trackers and the troops based in Sarambwe (a special unit that is collaborating with ICCN), with support from ICCN. The trackers have collaborated with FARDC soldiers in patrols and in making observations of the fauna and of illegal human activities or encroachments of the reserve. They have been working for an average of 22 days per month, i.e. 264 days during the one-year period. In addition, the trackers have been maintaining the guard post, including small construction projects. They have also been maintaining the demarcation between the reserve and the communities' fields, and they have been maintaining the tracks required for monitoring.

Camp maintenance: The camp has been maintained by the trackers at regular intervals and is in good and clean condition. In June, the trackers constructed a latrine and a mud-walled kitchen for the Sarambwe post, which has improved the sanitary conditions of the camp. These constructions are, however, temporary solutions until the post can be reconstructed with durable materials; the construction of toilets and the kitchen from durable materials should be planned.

On one occasion, a banana plantation was observed to have been damaged, but this did not cause a conflict because the plantation was located within the reserve.

Maintenance of tracks for monitoring: All the reserve's tracks have been maintained at least four times, resulting in a total of approximately 120 km of maintained track.

Observations of the fauna: Amongst large mammals,bushpigs and 6 primate species are regularly observed in the reserve namely black-and-white colobus (Colobus guereza), the diademed or blue monkey (Cercopithecus mitis), the red-tailed monkey (Cercopithecus ascanius), chimpanzees (Pan troglodytes), baboons and gorillas. The reserve has also been visited by elephants from Bwindi Impenetrable Forest, a national park on the Ugandan side of the border, and by kob antelope. The trackers have also reported a hyena - but this might have been a genet or a civet.

Of all the large mammals, red-tailed monkeys were seen most often (48 times), followed by bushpigs (31 times), baboons (25 times), chimpanzees (23 times) and black-and-white colobus (22 times). These animals, and the gorillas, can be viewed as characteristic of this reserve. Other species of large mammals were observed at most one or two times.

The red-tailed monkeys move in groups consisting of 6-42 individuals; baboon groups number between 9 and 38 individuals. The highest number of individuals in a group of chimpanzees was 17. Two gorilla families and one solitary gorilla male visited the reserve during 10 of the last 12 months: in April, May, June, July, September, November and December of 2016, and in January, February and March 2017. The two groups are the Mukali family with 12 individuals including 2 juveniles, and the Gahanga group with 10 individuals.

Illegal human activities: Illegal human activities observed in the reserve included illegal movements of people to set traps and to fish in the Evi River, agriculture, and pit-sawing. The two latter activities are carried out by the Ugandan population with the support of soldiers stationed on the country's border or in the neighbourhood. In addition to the known plantations of beans, manioc and wheat, people are also growing marrows and fruit trees such as the Japanese plum. The growing of bananas, which had decreased, has recently enjoyed increased popularity again. On one occasion, the cutting of timber for construction was observed.

A total area of 249 ha is used for agriculture according to the trackers' estimates. Of these, 49 ha are used for the growing of beans, manioc, bananas and eucalyptus and 200 ha for wheat. These are the areas that are encroached regularly. By contrast, no areas are known where the forest has been cleared to make way for new fields.

Nine pit-sawing sites were dismantled, with 15 boards confiscated in addition to crosscut saws. 13 traps were found, nine of which were constructed from metal wire, whereas four were made from lianas to catch rats and small rodents.

Capacity-building activities: In April 2016, the trackers were trained in GPS handling. They are now able to collect geo-referenced data. Data on trails and other boundaries are available and await processing such that a map can be produced.

Sensitization and negotiation activities: Regarding the new encroachments of the reserve by the Ugandans - who claim to be in Uganda and not in the Democratic Republic of the Congo - a small team of two trackers and two local chiefs have travelled from Sarambwe to Uganda to coordinate with the local chiefs and with the troops based near the Bwindi Impenetrable Forest National Park. The consultation took place in April 2016, with the support of Berggorilla & Regenwald Direkthilfe. Although all parties acknowledged that the Sarambwe Reserve had been encroached, particularly by the Ugandans, it took over six months to organise a larger meeting to discuss the problem with all the stakeholders - representatives of the Congolese administrations (Governor's office of North Kivu Province and the Rutshuru territory) and Ugandan representatives, as well as representatives of the ICCN, UWA, Bwindi Impenetrable Forest National Park, the Congolese and the Ugandan army. The encroachment of the Sarambwe Reserve by the Ugandans was known to all but there is a demarcation problem as the Ugandans seemed ignorant of the International border's exact location. We have every reason to be happy about this meeting as it facilitated the arrest of certain farmers and Ugandan poachers in the reserve.