Can the Gorillas of Mt. Tshiaberimu Survive? 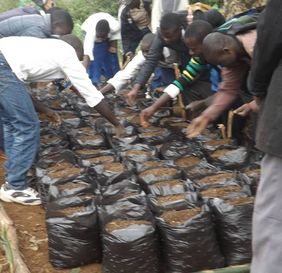 In previous articles we have documented the invaluable support Berggorilla & Regenwald Direkthilfe has provided over the years to gorilla and habitat conservation on Mt. Tshiaberimu and in the Sarambwe Reserve. With the help of entrusted staff members, the organisation supports both the neighbouring human populations and the actual protection of the animals and their habitats. Effective conservation of the environment, particularly within protected areas, needs to include both of these aspects: while the fauna and their habitats must be protected, the populations need to be targeted in order to increase their awareness of the protected areas, improve their living standards and reduce or, better, halt their dependence on the resources found within these protected areas.

Initially Berggorilla & Regenwald Direkthilfe focussed particularly on the raising of awareness concerning the gorillas and the Mt. Tshiaberimu habitats, funding surveys, capacity-building projects and monitoring. All these activities were accompanied by subsidies and procurement of various materials and field equipment such as boots, waterproof clothing, sleeping-bags, water bottles, GPSs and digital cameras, and by provision of field rations and also bonuses to motivate temporary staff, non-ICCN staff or staff from other partners who carried out activities in the field.

The support provided by Berggorilla & Regenwald Direkthilfe is mostly determined by the requirements of the people responsible for individual sites - it may be the sole source of support for an activity or a contribution. These activities may be once-off or recurring: once-off as in the case of provision of field equipment and materials, recurring as in the case of bonuses to temporary staff involved in field activities (trackers) or provision of field rations. For example, in 2014 the Mt. Tshiaberimu rangers were equipped with field gear (boots, waterproof clothing, jackets, sleeping bags); between April and July 2014, an activity to re-demarcate the boundaries was carried out and the trackers/trail cutters employed in the process received small monthly bonuses to boost their motivation.

The infrastructure of Burusi patrol post was improved with the building of a wooden house with six rooms, improving the rangers’ living conditions and enabling them to receive visitors.

Since 2008, Berggorilla & Regenwald Direkthilfe has continuously supported tree plantation and agroforestry activities in the vicinity of Mt. Tshiaberimu, benefitting local organisations and associations such as churches, schools and health centres. As a result, 1,165,510 plants have been produced in the Mt. Tshiaberimu area - 35,000 by SAGOT (Solidarity with the Friends of the Tshiaberimu Gorillas) and 1,130,510 by schools, health centres and churches. This is enough to replant about 800 hectares. Thanks to the afforestation effort, the destruction of the park’s forest seems to have been halted - deforestation has not recently been mentioned in various reports by GO (Gorilla Organization) and ICCN (Congolese Institute for Nature Conservation).

Not all of the produced plants could be used for tree plantation, however, as people in Vuswagha, Ngitse, Burusi, Kitolu and Kyondo Mowa also require the trees as support structures for passion fruit plants. Four seedbeds, each with a capacity to hold 10,000 plants, were prepared in the latter 4 villages with funds provided by Berggorilla & Regenwald Direkthilfe for two seasons. These 80,000 plants will permit the conservation (i.e. non-cutting) of about 80-100 ha of plantation and allow the target households to generate more income. Over 200 people are participating in a passion fruit cultivation project, having planted the seedlings in their reforestation plots. Those people who received passion fruit plants in 2011 and 2012 now earn about 240 USD per month (information by Jean Claude Kyungu). We hope that this project will continue to contribute to the well-being of the population and also to the conservation of the Mt. Tshiaberimu gorillas, as the project itself constitutes a powerful sensitization.

The strategy for distributing the plants to the resident communities has followed that utilized by the school tree nurseries: the children are sensitized at school and they, in turn, sensitize their parents. At the same time, information is disseminated in the churches after worship and in health centres.

Berggorilla & Regenwald Direkthilfe is not the only organisation working at Mt. Tshiaberimu. For 15 years, permanent staff of the Gorilla Organization has also been based there. Unfortunately this organisation started to leave in December 2014 and will pull out completely at the end of December 2015. While GO worked at Mt. Tshiaberimu, the monitoring of the gorillas was assured. The track leading to Mt. Tshiaberimu was regularly maintained and sensitization sessions were carried out with the local population, in addition to other forms of support such as a project to grow passion fruit plants and potatoes, and one for apiculture. GO issued warnings when there were cases of disease among the gorillas, which meant that vets were able to be brought in to treat them.

What Future Do the Gorillas of Mt. Tshiaberimu Have?

As demonstrated, Mt. Tshiaberimu has received various forms of support: infrastructure has been built, capacity has been developed, and the population has received support. However, the survival of the Mt. Tshiaberimu gorillas still poses a challenge. In view of the current constraints, the question remains as to whether the gorillas can survive in the long-term.

Firstly, the Mt. Tshiaberimu gorillas number only 6 individuals, travelling in two groups. The Katsavara group has 2 male gorillas, one female and a baby. The Kipura group includes only 2 males. The only female on Mt. Tshiaberimu is already quite old and it would be difficult for her to maintain a pregnancy. As there is a lack of females, the risk that the Mt. Tshiaberimu gorillas will disappear is very real. The threat from traffickers is low as there are no young gorillas that traffickers would be interested in.

Secondly, at some point, an armed group called Maï Maï had claimed the area. The salient message here is that if the gorillas were killed, there would no longer be any point in conserving Mt. Tshiaberimu, the ICCN would not have sufficient reason to base staff in this area, and the local population could recover it for agriculture. Without strong advocacy and a strong presence on the ground, the risk that the gorillas will disappear is increasing and imminent.

The big questions that need to be answered, if we do not want to watch helplessly as the Mt. Tshiaberimu gorillas disappear forever, are as follows:

With this article, I ask all friends of the gorillas to think about these questions.