Being a Good Guest - A Guide for Tourists Visiting Gorillas 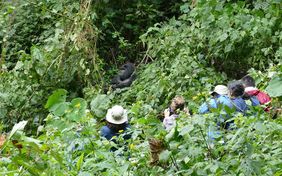 As with many types of wildlife tourism, viewing gorillas has grown in popularity since the 1980s. Currently tourists can visit more than 20 gorilla groups in the Virunga Massif and another 14 in Bwindi Impenetrable National Park, Uganda. Approximately 50,000 tourists visit mountain gorillas each year. Tourists can also visit Grauer's gorillas in Kahuzi-Biega National Park, Democratic Republic of the Congo as well as see habituated western gorillas at four sites (Bai Hokou in Central African Republic, Mondika and Odzala in Republic of Congo, and Loango National Park, Gabon).

With little doubt, tourism has been beneficial for gorilla conservation. The permit fees provide millions of dollars in revenue for the park services and associated tourism businesses. Routine monitoring of the habituated groups provides increased protection of those gorillas and enables veterinarians to treat habituated gorillas. This greater protection of habituated gorillas is believed to be partially responsible for the large increase in the number of mountain gorillas in the Virunga Massif since the mid-1980s (Robbins et al. 2011). However, tourism can also be a threat to the gorillas if not properly managed.

Seeing gorillas in the wild is a dream of many people and is an unforgettable wildlife experience. It is very different from observing wildlife from a vehicle on a game drive, because there is nothing except some forest vegetation between the gorillas and us. This makes it an incredible event but also brings in different challenges. We are able to get a close view into the lives of some gorillas because they have been habituated. Habituation, or when the gorillas grow accustomed to humans being in close proximity, is a form of trust between the gorillas and us. They learn to expect us to act in a certain way and in return, they will permit us to be nearby.

Therefore, in the excitement of a unique encounter with habituated gorillas, we should also not forget that like most things in life there are guidelines to be followed. The rules for gorilla tourism are in place essentially as a means to maintain the trust of the gorillas as well as protect them from too much disturbance. These rules exist not only to ensure the safety of visitors but also to attain the main goal of gorilla tourism: the conservation of the gorillas.

There is something very special about being embedded with a gorilla group. Even after studying gorillas for nearly 30 years, I still enjoy the privilege of watching the day-to-day activities of a gorilla family. I also enjoy talking with tourists about their experiences and sharing the world of gorillas with them. I view being with the gorillas the same way as being a guest in someone's house, or in this case, forest. As a guest, I treat the hosts with respect and behave in a polite manner. If guests behave in an inappropriate way, they are likely to offend the hosts, cause them stress, or in the worst case threaten their safety.

What are the "house rules" for visiting gorillas and why do these rules exist? When conservationists developed gorilla tourism in Rwanda in the 1980s, they realized that if it were to succeed as a conservation strategy, it would need to be regulated (Weber & Vedder 2001). The rules are in place primarily to minimize disturbance to the gorillas, reduce the risk of disease transmission from humans to the gorillas, and provide a safe, high quality experience for tourists (Macfie & Williamson 2010). People visiting the gorillas will hear these rules a few times and the majority of visitors are interested in protecting the gorillas. Nonetheless, it is valuable to spend some time thinking about the justification for the rules. Furthermore, putting yourself in the "shoes" of the gorillas - our hosts - may help you remember what the rules are and provide a more meaningful experience. The guidelines have changed little over the years:

If your guide is not following the rules, say something to him and/or to the park managers at the office. We live in an age where you can voice your opinion and rate the quality of anything online (TripAdvisor etc.), which includes gorilla tourism. Sometimes guides may bend the rules in hopes of getting a larger tip from tourists, which is shortsighted on the part of both the guide and the tourists. Everyone - the park staff, tourists, tour operators, conservationists, and researchers - must work together to maintain the rules for the long-term benefit of the gorillas. It may be easy to think "oh, I'm only seeing the gorillas once, so it is okay if I sit one meter away from this infant gorilla if the guide allows me", but please remember you are one of thousands of people visiting these critically endangered animals and it only takes one person to transfer a cold. Do you want to be the person that gives the gorillas a cold virus? Do you want to be causing stress to the mother and father of that infant gorilla?

Lastly, while it is not an official rule, I suggest that when visiting gorillas you put your camera down for at least five minutes of the hour. Photos are a great way to document your experience, but rather than spending the full hour taking many, many photos, take some time and simply watch the gorillas. Why are you visiting the gorillas in the first place? Is it simply to get a photo or is it for the overall experience? After all, you would take photos the entire time you were visiting friends?