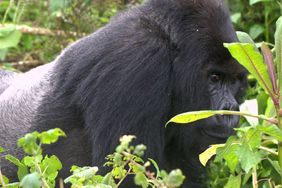 The 21-year-old silverback male Umushikirano (Rano), leader of Titus group in Volcanoes National Park, was found dead on July 28, 2014 by trackers. There were no visible signs of injury or illness and his body was carried down the mountain and transported to the Gorilla Doctors headquarters in Musanze, where a necropsy was conducted. Rano suffered a perforation of the small intestine and acute peritonitis.

On October 1, 2014, the 24-year-old dominant silverback Bwenge was found dead by trackers. On September 20 and 24, Bwenge had interactions with a lone silverback and was wounded - these wounds may have caused his death. Bwenge was a son of Titus and Ginseng. He grew up in Beetsme's group and split from this group to form his own in 2007. The group grew in size rapidly, and after just 3 weeks females from Pablo group joined him. Among those was the elder Maggie. She led the group for some time after Bwenge's death. About a month later, the rest of the Bwenge group merged with the Ugenda group.

Summaries of blog entries by Gorilla Doctors and DFGFI