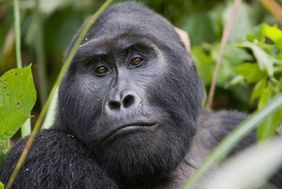 Mishaya, the leader of the Mishaya group, died on 3 February, 2014 at the age of 28 years after a short illness. Preliminary results indicate that his death resulted from a coiling of the intestines. Mishaya was known as a fighter who often started interactions with other groups. He suffered very serious injuries during a fight with another group in April 2011, when he had deep wounds on the upper lip and left eyebrow, a swelling on the left upper eyelid, on the right elbow, both hands and below the ankle of the right foot. Despite the severity of these injuries, he recovered without interventions.

Mwirima, the leader of the Rushegura group, died on 3 March, 2014. He was probably about 35 years old. During the last two weeks of his life, his health was visibly becoming poorer; he was not feeding well and lagging behind. When his condition deteriorated, the Gorilla Doctors were called for an urgent intervention. During this intervention, the veterinarians discovered a wound in Mwirima’s mouth which had made it difficult for him to feed. After his death the Rushegura group was led by the blackback Kabukojo, assisted by the blackback Kalembezi.

Summaries of information by UWA and theGorilla Doctors