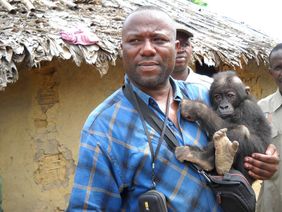 While the Maiko National Park still contains a high biodiversity, it is increasingly obvious that its conservation is still dependent on finding a solution for the threats to its natural resources, which have decreased neither in number nor in intensity.
The current levels of threats and their consequences are high: the challenge to keep these threats within acceptable proportions is enormous. Basically, the park is facing problems that threaten its very survival.

Various zones of the park are occupied by sundry armed bands and other mystical-religious groups. In particular, the Simba rebels have occupied the southern sector of the park since 1964; the Mai Mai are occupying parts of the northern and central sectors, and the mystical-religious groups of the Idomes and the Kitawalists are occupying the central section.
In the past, the presence of these groups did not have a marked effect on the park's natural resources, nor did it pose an obstacle to conservation activities. More recently, however, their presence has become increasingly alarming. The following are the emerging threats:

The Exploitation of Minerals within the Park

At least 17 quarries are operating inside the park (for gold, coltan, diamonds, etc.): 9 are located in the northern sector, 3 in the centre and 5 in the southern sector. The quarries are owned or co-owned by the armed bands, certain uncontrolled elements of the armed forces and some local chiefs.

Commercial poaching is taking on alarming proportions, posing the most important threat to the park's fauna. It is mostly committed by the armed bands, the uncontrolled military elements and by traders who live in the surrounding urban centres and buy bushmeat from the hunters in exchange for money and/or manufactured products such as salt, soap, clothes, cigarettes and alcoholic beverages. To a smaller degree, the local population also engages in poaching.
Although elephants, buffalos, chimpanzees and the smaller primate species are the primary targets, no species is spared - the poachers kill any animal they encounter along their route. Poachers now use military issue weapons such as 12 calibre guns, traps and even poison. The presence of military posts in the peripheral zones of the park and the increased availability of military weapons can only exacerbate the problem.

The Trade in Live Animals

This trade has reached enormous proportions in all three park sectors. Young animals are captured alive to serve as pets or for sale. The most targeted species are baby gorillas, chimpanzees, other primates, birds and the okapi.
Thanks to the efforts and the determination of the Park Director and his staff, a far-reaching network of illegal traffickers has recently been dismantled after a long investigation. Since 21 March 2011, 5 traffickers have been arrested and taken to court. One baby eastern lowland gorilla, about 2 years old, was confiscated just before it could be sold. This gorilla baby is now being quarantined in Goma, prior to being rehabilitated.

A war involving armed bands automatically results in a proliferation of weapons and ammunition. However, a disorganized issuing of weapons permits also has something to do with it. The emergence of arms and ammunition manufacturers complicates the situation even further.

The threats to Maiko National Park are numerous and varied. In combination, they have a negative impact on the ability of the park to exert control and, consequently, on the coverage of our protection units - which is at most 15%. Most monitoring activities are in abeyance.
This situation has a whole range of consequences such as the resurgence of illegal activities and the threats thus posed to the fauna, frustration and a drop in motivation among rangers, etc. Due to their nature, origin and cause, some of these problems cannot be effectively addressed by the park management alone. A solution requires the lobbying and concerted action of all involved stakeholders, with concerted and participatory action an absolute necessity.
Ever sensitive to the problems of the park, Berggorilla & Regenwald Direkthilfe (B&RD) has graciously agreed to provide substantial financial support to the Park Management. Thanks to this support the park management was able to initiate a sensitisation and lobbying campaign in December 2010, aimed at persuading the political-military authorities to become involved in the search for sustainable solutions to the problems facing the park.
Members of the park's staff have already met with the political-military authorities of the provinces of Maniema and North Kivu and the Eastern Province on several occasions. A high-level meeting is expected to follow up these concerted efforts.