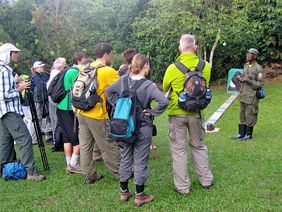 The mountain gorilla (Gorilla beringei beringei) is listed as Critically Endangered (C1) by the International Union for the Conservation of Nature (IUCN). As of Spring 2010, the estimated total number of mountain gorillas worldwide was between 780 and 790 (Palacios et al. 2011). Bwindi Impenetrable National Park (BINP), Uganda contains an estimated half of the world’s mountain gorilla population with 31 known gorilla families.

Currently, there is one group habituated for research, 9 groups habituated for tourism, and 21 groups remain wild. Eight people are permitted to track the tourism-habituated gorillas per family group per day and their viewing time is limited to one hour. Two of the 9 tourist groups were opened for mock tourism in spring 2011 and the Uganda Wildlife Authority (UWA) plans to provide more tourism-habituated groups for the public in the future (G. Balyesiima, pers. comm.).

Ecotourism has been crucial to the conservation of the mountain gorilla and provides a significant amount of economic revenue to the Democratic Republic of the Congo, Rwanda, and Uganda (Sandbrook & Semple 2006). It is no surprise that gorilla tourism, and great ape tourism in general, are on the rise, though there are inherent risks involved with increasing contact between humans and great apes.

The primary concern for the mountain gorilla is the transmission of fatal diseases. The Mountain Gorilla Veterinary Project reviewed causes of mortality for over 100 mountain gorillas, and found that the second greatest cause of mortality, following trauma, was disease, specifically respiratory diseases (Cranfield 2008). It is possible for a single tourist out of the thousands that annually visit the World Heritage Site to pass pathogens (e.g. influenza) to the gorillas (Cranfield et al. 2002). A recent case in Rwanda showed that two wild mountain gorillas died during a respiratory outbreak in 2009. In this case, the human metapneumovirus (HMPV) infection showed a close relationship to South African human isolates, leading experts to believe that it was a result of tourism (Palacios et al. 2011). Ecotourism and other threats to mountain gorilla health will continue to increase (Wilson 1995, TIES 2006).

Two separate studies carried out in 2004 and 2011 at BINP show that the 7-metre distance for gorilla tracking is not maintained. In order to protect these last remaining mountain gorillas, appropriate research and preventative measures, in addition to the 7-metre distance regulation, need to be rigorously implemented (Cranfield 2008, Sandbrook & Semple 2006, Wallis & Lee 1999).

The 2004 study analysed data collected between February and December near Buhoma village in the Mukono parish of BINP (Sandbrook & Semple 2006). Tourists participating in the study tracked the habituated gorilla groups Rushegura, Mubare, and Habinyanja. The study aimed to determine how close tourists come to gorillas during a gorilla tracking viewing, and whether the current regulation of 7 m is adhered to. In total, 361 tourist interviews were conducted, representing 133 independent tourist tracking groups. The mean distance between tourists and gorillas at the time of closest contact was 2.76 m, with no reported events of physical touching. Sandbrook and Semple discovered that juveniles, which are more vulnerable to diseases, had closer distances but shorter time durations near tourists. “The results demonstrate that the present rules are failing and that the risk of disease transmission may be greater than previously believed.”

The much shorter 2011 study also conducted interviews within BINP borders at the UWA gorilla tracking briefing point and various types of accommodation, within and beside park entrance gates, from the middle of May through the end of June 2011. One interviewee had tracked a newly habituated group while all other 24 interviewees tracked the same groups as 2004 – Rushegura, Mubare, and Habinyanja. Interviews showed that tourists encounter gorillas at distances below the 7-metre rule, or even experience direct contact. The average closest distance the gorillas came to the interviewees was approximately 2.20 m, and 5 had physical contact with a gorilla.

The results of these studies show that the 7-metre rule is clearly not enforced properly, and the proximity between gorillas and tourists is dangerously close. The closer humans are to gorillas the higher are the chances that pathogens can be spread between humans and animals (Macfie & Williamson 2010). Keeping tourists further away would greatly reduce exposure. In a controlled environment without any wind or ventilation factor, sneeze particles can travel 6 m (20 feet), influenza can be transmitted up to 20 metres, and with light wind and ultraviolet conditions airborne organisms, aerosol or dust particles can travel much further (Homsy 1999).

The respiratory syncytial virus can remain infectious via droplets and fomites up to 12 hours (Black 2003). RSV is the leading cause of serious upper and lower respiratory tract infection; in infants and children, it accounts for 125,000 hospitalizations and 450 deaths annually in the United States. No cure exists for it and, like most respiratory viruses, infants or immunocompromised individuals are at more risk for severe morbidity and have a higher risk of mortality. The majority of close interactions and direct contact moments during a tourist trek are with more curious younger gorillas, where gorillas touch the shoes, boots, or bottom of the trousers of tourists.

The 2011 study was not meant to be a duplicate of the 2004 study, but it does show that contact distance and frequency between tourists and gorillas are higher 7 years later. With a much smaller sample size, 5 of 25 interviews (20%) reported events of physical contact with gorillas, compared to 0 of 361 interviews (0%) in 2004 (Sandbrook & Semple 2006).

The risk of disease transmission between tourists and gorillas rises with increasing proximity. Especially since tourist group size and number of habituated groups has increased in the parks and may continue, officials need to find a way to enforce and maintain distance between humans and gorillas during treks (G. Balyesiima, pers. comm.). There are many reasons why the 7-metre distance is hard to maintain, such as poorly trained trackers, lenient trackers, dense forest impeding viewing, and curious juvenile gorillas (Sandbrook & Semple 2006).

The 7-metre distance has been a controversial regulation for over 7 years. Improved strict enforcement is needed, and efforts to ensure this must be sought more aggressively by giving UWA staff more frequent and better quality refresher trainings and by improving education to tourists. The health risks posed by tourists to gorillas, and the regulations, must be made available from the home country of the tourist (e.g. travel agencies, travel health clinics) all the way until the first steps of the trek. “These possibilities now require urgent consideration because if action is not taken there is a risk that the tourists who believe they are supporting gorilla conservation will unwittingly contribute to their further decline.” (Sandbrook & Semple 2006) A revamped higher quality educational video must be watched in its entirety before tourists are placed into groups prior to the pre-departure briefings. We cannot depend on the 7-metre distance regulation to protect mountain gorillas from disease transmission.

The difficulty of maintaining the 7-metre distance is indisputable, given so many factors including animal behavior, dense forest conditions, lenient guides, and curious juvenile gorillas. Data show that the 7-metre rule is still being transgressed, and that people and gorillas are on occasions in even closer proximity to one another than in the past. Additional preventative measures on top of enforcing the 7-metre gorilla viewing distance are vital in the protection of the mountain gorilla. Protocols and recommendations will need to be monitored closely by staff and appropriate alterations made in order to protect the remaining Virunga Volcanoes and Bwindi Impenetrable National Park mountain gorilla populations.