Support of the Simba inside Maiko 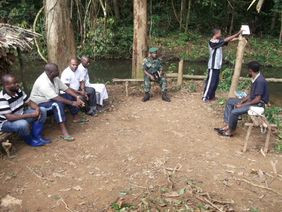 A meeting of representatives of ICCN, the military and FZS with the Simba (© Eugene Izinga)

The Maiko National Park (MNP) is one of 7 national parks in the Democratic Republic of the Congo (DRC). It was established by Presidential Decree no. 070/312, dated 20 November 1970, and covers an area of 10,830 km². It is located in the north-east of the DRC and extends over three provinces – the Lubero and Walikale territories in North Kivu, the Bafwasende territory in Oriental Province and the Lubutu territory in Maniema Province.

The Maiko National Park embodies the intent of the DRC government to protect the immense rainforest and to safeguard the survival of key endemic species such as the eastern lowland gorilla, the okapi and the Congo peacock, in addition to species at risk of becoming locally extinct, such as the elephant, chimpanzee and various other species of primates.

For effective and efficient management, the MNP is subdivided into three sectors – the northern, central and southern sectors – all of which are under the supervision of a central management unit located at Lubutu. Each of the three park sectors has patrol posts that are no longer operational, due to incidents between Simba fighters and the park rangers and to the limited funding available to the park. A park rehabilitation project is currently underway, such that MNP is in the process of re-launching monitoring activities in all sectors.

The presence of the Simba in Maiko National Park goes back a very long time. They were there since historic times, but were taken close to the main road by the Belgians. They lived on hunting and fishing. During the 1964 Mulele rebellion, which engulfed the whole country, they became warriors and retreated into the forest to protect themselves from Government reprisals and because they were furious about the death of their idol Lumumba – they only accepted recently that he has been killed.

When the Maiko National Park was created in 1970, the presence of the Simba was not taken into account: the Congolese (formerly Zairean) authorities did not plan or take any measures to relocate them outside a protected area.

The problems between the park authorities and the Simba intensified as the establishment of the park progressed. The rangers found it difficult to fulfil their mission of protecting the park as they frequently became involved in skirmishes with the Simba. This situation persisted until around 2000, after the civil war. Everybody knew that their presence in the park posed a serious problem but nobody was able to come up with a solution. In order to be able to carry out patrols and other work inside the park, the park authorities finally came to an understanding with the Simba – a compromise was reached. However, in April 2009 the army called up the rangers to participate in an operation against the Simba with the objective of forcing them out of the forest. Unfortunately, one ranger was killed in the ensuing fight and when the Simba saw his dead body, they considered the rangers as traitors for having led their enemies. A trial of strength commenced and the activities of the rangers in the park ground to a halt.

The Frankfurt Zoological Society (FZS) arrived at the end of 2009 and started activities in 2010. They recognized that it was important to initiate certain measures for the Simba to leave the park peacefully, because other groups (poachers or miners) operating in the park may present themselves as Simba and the distinction between the groups is difficult to make. Strategies had to be outlined before it was possible to find a solution and embark on this procedure, and to define who exactly should be involved to ensure a sustainable solution. We should take into account the risk that, if they leave, another armed group such as the FDLR or Ma Mai may take over. The FZS wanted to find a long term solution; but not resolve one problem by creating another more difficult.

This approach was not easy and required much lobbying and sensitization at the political and diplomatic, as well as at social levels including involvement of the local chiefs who have already played a very important role because they have respect from the Simba. The strategy of FZS is to encourage the Simba to leave while offering them certain assistance:

Towards the end of last year, a broad concept was developed which included the following activities:

Lobbying started at the beginning of January 2012 when a FZS-ICCN team met the politico-military authorities at Kindu to secure the authorisation for negotiation with this armed group. The Governor gave an authorization to proceed.

The FZS-ICCN team then scheduled a trip into the park to meet with the Simba. This meeting was facilitated through several contacts set up by local chiefs, following an agreement with the Simba leader that he would meet the team.

The first meeting had the objective of renewing relationships which had existed between the park rangers and the Simba and which had allowed the patrols to be carried out. At the end of this first meeting, the chief Simba gave his agreement for the rangers to resume patrolling – which they subsequently did, even going on mixed patrols with the Simba. Other questions were also raised during this important meeting, such as possibilities for their peaceful exit, their re-integration into normal life, etc.

The contacts that were initiated at the site level by ICCN and FZS subsequently required an involvement at a much higher level. The relocation of the Simba from the forest has many implications in regard to the need to reintegrate them into normal social life, which means an orientation either towards the army or towards civilian life. The FZS has thus initiated contacts with diplomatic missions, the relevant ministers, the army and the Director General of ICCN to get them involved in finding a long-term solution.

On a suggestion from the ICCN Director General, a team was formed to carry out a second sensitization mission focusing particularly on the means of achieving a peaceful exit of the Simba. This team included a representative of ICCN Director General from Kinshasa with extensive experience in negotiating with armed groups, who went to Kindu to meet the military authorities of the province. In Kinshasa, the issue was taken up to the higher Military instances and the 7th military region in Maniema Province who sent an emissary (a colonel in charge of security and military intelligence at the provincial level who was accompanied by a lieutenant from the intelligence section). The venue of the meeting was approximately 8 hours’ march (from the main road) into the park. The meeting included representatives of the ICCN Directorate-General, representatives of the military region, the chief warden and a FZS representative. The main objective of the mission was to sign an agreement between ICCN and its partners on the one side and the Simba on the other side, for a peaceful exit and re-integration to normal social life.

By the end of the mission, the parties had agreed to all the suggestions and proposed that this should be gradually implemented. The 30 men who will join the ICCN will be available as soon as joint patrols have been held comprising ICCN rangers and the Simba. This has now taken place and the prospective rangers are expected to join up in October. In addition, a list of 250 children who require schooling (this number may go up with more people returning) has been provided and a monitoring group set up to ensure adherence to commitments over a 3-month period. Three households that have already come out of the forest have been provided with metal sheets.

As an army representative was among the team, the Simba warriors received a firm guarantee that they will never again be pursued once the agreement was signed. The presence of an army representative played an important role in convincing the Simba to leave the forest. Their interest in doing so is palpable – and the whole army has been sensitized so as not to disturb those who come out of the forest.

In the meantime, the Simba chief together with his high-ranking community members has been involved in sensitizing their warriors and the rest of the people to accept the fact that they can leave the forest, and live their lives normal lives in villages.

We are convinced that the relocation of the Simba from the park will improve its protection, which is important to achieve conservation goals. It also allows to establish research and monitoring teams, which FZS proposes to set up and coordinate. To date, the mixed patrols report the presence of important biodiversity, with gorillas, chimpanzees, okapis and other ungulates having been seen in significant numbers. This strengthens the interest that FZS has taken in this site and will help ensure its long-term conservation.

We would like to express our gratitude to BMZ (German Federal Ministry for Economic Cooperation and Development) for co-financing this project, which is in the process of giving this park international visibility.