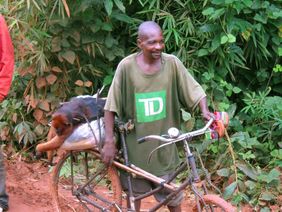 Maiko National Park (MNP) is part of a network of 7 national parks located in the Democratic Republic of the Congo. The MNP was created in 1970 by Decree no. 70-312, dated 20 November 1970, and covers an area of 10,830 km² within three provinces: Orientale, Maniema and North-Kivu. The park was gazetted primarily to protect a block of swamp forest.

MNP contains habitats for several key endemic species such as the eastern lowland (Grauer's) gorilla, the okapi, the forest elephant and the Congo peacock. It is also an important watershed and plays an essential role in the sequestration of carbon.
In terms of biodiversity, MNP ranks second in species richness among the 8 biodiversity reserves in the Congo. Despite this fact, the functioning of the park as a protected area has been severely compromised by a lack of national and international support, its inaccessibility and the continued presence of armed bands.
Park staff are reduced in numbers, aged, badly paid and insufficiently trained. Quantitative and qualitative improvement in all aspects of park management is an urgent requirement to protect the area, but the profile and the requirements of each staff posting also need to be monitored as to whether each incumbent meets these requirements. In short, it is a question of putting the right person in the right place.
The presence of armed bands in the park is a key threat which needs to be addressed and addressed quickly. The removal of the armed bands is essential in order to make the park secure and stable. Action has already taken place in respect to the Simba Mai Mai, whose removal was planned and realized in cooperation with the political-administrative, traditional and military authorities, as well as other parties such as MONUSCO. The presence of the armed bands has forced the regular army to take up positions along the periphery of the park in order to control the threat posed.
The armed bands are responsible for the large-scale poaching of elephants, okapis and gorillas. They also encourage and support the illegal exploitation of minerals within the park, and are a constant threat to park staff and visitors. Unfortunately, certain elements of the regular army also engage in poaching and in the exploitation of minerals inside the park.

Main challenges for the future management of the park are the re-establishment and conservation of ecosystem integrity within the park, and the documentation of its biodiversity and natural resources. The sheer scale of the problems faced by the MNP means that significant funds and a great deal of scientific and technical inputs will be required.
ICCN would like MNP to become a viable World Heritage Site managed to international standards, with an ecosystem that is protected in the long-term and safeguards the survival of key endemic species and those that are locally threatened by extinction - such as elephants and primates. The site should be developed to contribute to environmental stability, to support the fight against poverty of the population in the surrounding area, and to contribute to the economic stability of the region, which has suffered through several decades of war.
Putting into place a modern and efficient management system that will facilitate the long-term protection of the natural resources of the MNP will require the following:

If we can continue to develop and manage the MNP in harmony with the efforts of other partners, 2011 could turn out to be a year of renewal and hope.