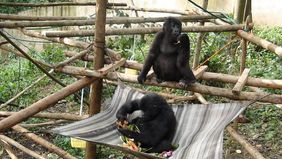 Ndeze and Ndakasi in the Senkwekwe Centre (© www.gorilla.cd)

The two mountain gorilla orphans Ndeze and Ndakasi grew up in a house in Goma - a town full of dust and noise. These are certainly not suitable surroundings for gorillas, so we constructed the Senkwewke Centre close to the Rumangabo park station to house the orphans. The space of the enclosure is a rectangle of about 1 ha and the building where the gorillas are housed is about 12 x 4 m.

The centre is important for the community too, because it will give the people the chance to see gorillas, sometimes for the first time, and it will help to educate the next generation.

Move of the Orphans

On December 1st, 2009, Ndeze and Ndakasi moved to their new, lush, forest home in Virunga National Park - the Senkwekwe Center. The gorilla girls are now with André Bauma and the other carers in the 40 x 40 m holding facility, within their enclosure, a stone's throw from their habitat in the Gorilla Sector.
The gorillas were tranquilised to put them in a truck that had been parked for a week in the house, so they had had the chance to get used to it. They left Goma in a convoy of 3 cars that headed north to begin the 45 km journey to Rumangabo park station. No one knew the gorillas were in the truck; we had kept the moving date confidential.
Emmanuel de Merode parked at the top of the little path heading down toward the Senkwekwe Centre, and then Ndeze and Ndakasi got their first peek at the forest. André Bauma and the other carers carried them the short walk to their new home. Once inside, Ndeze and Ndakasi stuck to their carers and would not leave their side. But after a very short time - literally 5 minutes - they started to gain confidence in their new surroundings. Gradually they started to leave their carers' sides and explore…
In addition to the Congolese Wildlife Authority ICCN, the Gorilla Doctors, DFGFI, Gearing Up 4 Gorillas and many others, our biggest thanks go to Adam Murry at The Murry Foundation who has contributed over US$ 100,000 to date, and also to a lady Canadian donor who donated $ 30,000. Absolutely none of this would have happened without them. At the time of Ndeze's and Ndakasi's move, the perimeter wall of the plot was not yet finished. The wall and the visitor platforms, educational center and veterinary facilities still remain to be built.
December 2nd, 2009 by Samantha Newport

The gorilla girls continue to adapt well to their new life in the forest. Monday is an important shopping day for gorilla food - mainly cauliflower and carrots. There are 3 markets relatively close by, but they all stock different things. Ndeze and Ndakasi both love forest food, and market food - so for now we must still supply both. Diddy Mwanaki is in charge of bringing the forest food from the Gorilla Sector - three times a week.
Ndeze & Ndakasi spend a lot of time playing on the climbing structures that were erected last week. At the edge of the wall there is electric fencing - so far neither of them have touched it! Undoubtedly they are much happier here than in Goma, and André and the other carers are very positive about this new environment.
All the gorilla girls do all day long is play, eat and sleep. As they should.
December 14th, 2009 by Samantha Newport

Construction to Start in March

Ndakasi and Ndeze will soon be able to fully enjoy life in a custom-built forest home with their four carers, André Bauma, Patrick Karabanga, Alfred Mijirima Ngendayimana and Richard Ndakasi Kambale. Now with additional funding we will be able to finish it. We will also be able to facilitate a comprehensive educational outreach program, especially for the communities living around the Gorilla Sector. In addition, we will ensure that para-veterinary facilities are provided to care for the gorilla orphans, and the other wildlife in Virunga.
The final push was thanks to The Howard G Buffett Foundation. Howard Buffett visited Rumangabo, the Headquarters of Virunga National Park, in December (he was in fact the first visitor on the viewing platform), and has since donated US$ 80,250. These monies, combined with the funds raised on our website, will be doubled by the UN Foundation.
February 24th, 2010 by Samantha Newport

Life is Good for the Gorilla Orphans

When the orphans first moved to the Senkwekwe Centre we thought the baboons might be a problem as they can be aggressive and there are lots of them here, but fortunately a few electric shocks from the wire fence have scared them off. The colobus monkeys have also been curious, but Ndeze has now started to try and chase them away, or shake the trees from which they are peering down.
Interestingly Ndeze has started building gorilla nests in the tree tops, thus exhibiting normal gorilla behaviour. Ndakasi's hair - which was a reddy colour - is becoming more and more black. And neither orphan has suffered any health problems since they arrived here on 1st December 2009.
Today I gave the gorilla carers new uniforms that I brought from the UK; I purchased them last month with donations made on our website. They look extremely smart in their new forest green outfits. I also bought up a bicycle today from Goma to make it a bit easier for the carers to fetch their drinking water. Water for cleaning, cooking and washing comes from the roof of the gorilla house (it goes into a tank) but we need source water for human and gorilla consumption.
March 10th, 2010 by Samantha Newport
From blog entries at the Virunga National Park's website, www.gorilla.cd