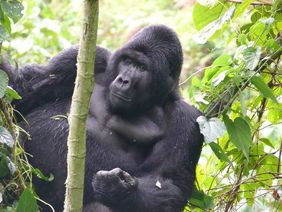 We estimate that Rukina was born around 1984. He was well identified as a group member of the Kyagurilo Group in the late 1990s when he was a young silverback. It was at this time that he was named “Rukina”, meaning “playful” in Rujiga, due to his playful nature as a young adult. He became the dominant silverback of the group in August of 2004, following a 3 year struggle for dominance over the previous dominant silverback (Zeus). Through genetic analysis of fecal samples, we confirmed that he sired his first offspring when he was still a subordinate male in 2002. Overall, he likely sired 10 offspring, most of whom are currently still infants. During his 11 year tenure as the dominant silverback he attracted 4 females into his group from neighbouring groups, attesting to his ability to be a good leader. He was a very tolerant silverback, spending a lot of time with the adult females as well as his many infants. At the time of his death, the group was at its largest size, containing 21 gorillas, including 8 adult females. He contributed to our understanding of the ecology and social behaviour of Bwindi mountain gorillas due to the focus of research on his group by the Max Planck Institute of Evolutionary Anthropology since 1998. He helped promote the plight of the critically endangered mountain gorillas around the world by being filmed for several documentary films including one by the BBC.