Ranging on Community Land and Crop-Raiding by Bwindi Gorillas 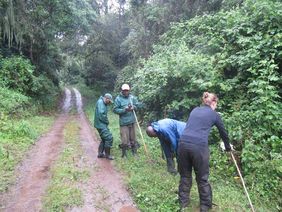 Conflict between people and animals is one of the main threats to the continued survival of many wildlife species and also represents risks to local human populations. If such conflicts are not addressed adequately, local support for conservation declines drastically. Therefore resolving human-wildlife conflict is a key issue for the future of wildlife conservation (Woodroffe et al. 2005).

In Bwindi Impenetrable National Park, Uganda, critically endangered mountain gorillas sometimes range outside the park and crop-raid. Gorilla crop-raiding and ranging outside pose threats to local communities, such as crop damage and loss, anxiety, injury and personal danger. On the other hand, gorillas face increased risks of disease transmission from humans and livestock, uncontrolled contact with humans and waste, harassment by local people and even retaliation killing (Goldsmith et al. 2006, Madden 2006, Hockings & Humle 2009). Bwindi is surrounded by one of the highest rural population densities (more than 300 people per km²) worldwide and all the land adjacent to the park is managed by local communities. Once gorillas leave Bwindi, they typically find themselves in people’s agricultural plots or uncultivated land. Though gorillas are only one of several species that crop-raid in Bwindi, they draw a lot of attention due to their size, the damage they may cause and the economic value they represent. Furthermore, the density of gorillas in Bwindi is most likely increasing (Roy et al. 2014) and if ongoing conservation management practices succeed, the population will likely continue to increase. Hence it can be expected that the extent of human-gorilla conflict will exacerbate, presumably leading to some gorilla groups ranging outside the park and placing greater pressure on local livelihoods.

Human-gorilla conflict is one of the major conservation concerns for Bwindi gorillas. The frequency of leaving the park and crop-raiding varies drastically for the different habituated groups. One group, the Nkuringo group, spends more time outside the park than inside and crop-raids more often than any other group. In 2005, a buffer zone was established by the Uganda Wildlife Authority and the International Gorilla Conservation Programme to counteract this group's ranging and crop-raiding behaviour. However, this zone was not well managed, allowing for herbaceous vegetation and fruit trees to regenerate, creating excellent habitat for gorillas (Goldsmith et al. 2006, Kalpers et al. 2010). Ultimately, in June 2013 the buffer zone was cleared for tea plantations.

Many factors have been suggested to cause gorillas to range outside Bwindi, including a lack of food resources inside the forest. Therefore we examined whether food scarcity inside the park or the availability of certain food resources, such as palatable crops, outside Bwindi caused the gorillas to leave the park. We wanted to investigate the behaviour of all habituated groups, not only the groups that were known to crop-raid as we were also interested to know why some groups do not leave the park and do not crop-raid. We examined the ranging and crop-raiding behaviour of 13 habituated groups of mountain gorillas, located in three general locations (Ruhija, Buhoma and Rushaga) throughout the park for a period of 13 months from May 2012 to June 2013. To do so, we trained 11 local research and field assistants to collect data on the gorilla groups’ ranging, behaviour, diet, and crop-raiding patterns. Additionally, these assistants were trained in monitoring almost 800 tagged trees for fruit every month to calculate an estimate of fruit availability per location.

Besides collecting data on gorilla behaviour, we worked with four field assistants with botany experience, who formed the vegetation sampling team. Over two years, they helped in counting and measuring of ~94,000 plants and trees throughout the gorillas’ home ranges to get an estimate of the availability of herbaceous plants for each group inside the forest. As we were also interested in estimating food availability outside the park, we walked ~56 km recording all crops and land-use practices in 50 m parallel to the park boundary. We crossed swamps, walked through herds of cattle and fields of maize, had to avoid steep ravines and cliffs, slid down steep-sided hills and were exposed to either hot sunshine in the dry season or pouring rain and slippery hills in the rainy season.

Our results revealed that Bwindi gorillas leave the park to feed on herbaceous vegetation growing in tea and pine plantations and on uncultivated land outside the forest as well as on palatable crops growing in people's gardens. A lack of food resources within the forest was not causing the gorillas to leave the park or to crop-raid. We found that tea did not deter gorillas from leaving the park. We think this is because tea plantations contain herbaceous foods regularly consumed by the gorillas. Furthermore, these plantations currently do not form a continuous barrier to stop gorillas from venturing further into community land.

The loss of fear of humans by habituated gorillas also has been suggested to play a role in the crop-raiding behaviour of mountain gorillas. However, the Oruzogo group, a group habituated only in the past few years crop-raided, whereas the Kyagurilo group which is habituated since the early 1990s has never been recorded to crop-raid. Additionally, the conservation area manager of Bwindi reported unhabituated groups to crop-raid. Hence, we think that the level of habituation does not play a major role.

To stop gorillas from utilizing areas outside the national park, we recommend turning land adjacent to Bwindi into unattractive habitat. This could be done by planting buffer crops that are high in fiber and secondary compounds, but low in sugar and sodium. Furthermore, we think plantation of crops like bananas or eucalyptus should be avoided as they seem to attract gorillas. We recommend removing herbaceous foods growing on uncultivated land and plantations and subsequently maintaining the land to keep it clear of foods consumed by the gorillas. If planted continuously around Bwindi and kept clear of herbs, tea plantations might be the best strategy to stop gorillas from travelling into community land. The buffer zone near the Nkuringo group was planted with tea in 2013, which should alleviate much of the problem if the area is properly managed. However, it will be important to assess the effect of tea in the buffer zone on the ranging and crop-raiding behaviour of Nkuringo group.

Implementing park wide wildlife sensitive land-use strategies adjacent to Bwindi is crucial to prevent this conflict from intensifying. Lastly, this study nicely shows that research and management have to work hand in hand to implement appropriate management strategies to conserve Bwindi mountain gorillas. While many of the results of this study may be specific to Bwindi, this study also emphasizes the importance of using research to guide management decisions for conservation of gorillas and other species.