Pressures on Natural Resources of the Maiko National Park 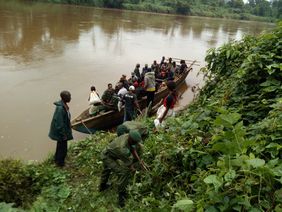 Management of the Maiko National Park (MNP) has remained difficult due to the presence of armed groups in different sectors of the park. The precarious security situation has resulted in the movement of people around and through the park and the proliferation of weapons, resulting in increased use and degradation of the park's biodiversity.

The threats to the park's staff and its biodiversity include traditional and armed poaching, artisanal mining, deforestation due to the encroachment of the park by armed groups and farmers, and the illegal trafficking of live young animals such as gorillas, okapis, chimpanzees and crocodiles.

Threats to conservation targets, and to the protected area in general, need to be monitored to assess how they affect the quantity and quality of biological resources. As part of the methodology, existing conservation strategies need to be reviewed to determine how to reduce the impact of threats on conservation targets, or to eliminate them altogether. A monitoring programme is presently being carried out, supported by FFI (Fauna and Flora International) and Berggorilla & Regenwald Direkthilfe, which aims to continuously document biodiversity and threats to the MNP.

This article compares trends in threats faced by the park in 2020 to those of the first quarter of 2021. This provides a basis for the reorientation of law enforcement. Foot patrols are considered a strategy for the monitoring and tracking of species in the MNP. This strategy is based on measurable indicators of threat protection and mitigation efforts. In total, 32 monitoring patrols were organised with more than half conducted in the second half of 2020. No scientific research took place. The figure shows the results of the SMART Analysis reports.

While a significant proportion of the monitored poacher camps were inactive, there was a marked increase in activity in the gold digger camps in February 2021. The trend towards high levels of mining activity could attract poaching to the area. Poaching increased in 2020, but the bushmeat traffickers were tracked to the surrounding villages. This enabled a reduction in poaching by the beginning of 2021, but - as shown by patrol results in March 2021 - there was a consequent surge in mining operations. The challenge is to address both poaching and mining simultaneously, which is especially difficult considering that the mining operators are protected by the so-called Forces Divines Simba (FDS). The government has initiated the demobilisation and disarmament of the FDS under the supervision of the ICCN (Congolese Institute for Nature Protection), but the monitoring of the biodiversity in the MNP remains problematic until this process has been completed.

In order to provide adequate solutions to the threats facing the MNP and to optimise effectiveness of the available human, financial and material resources, a process of programme categorisation and prioritisation has been put into place as used by the SNCB (Stratégie Nationale de Conservation de la Biodiversité) which defines three programme categories linked to structuring, management and development, and sets priorities for each.