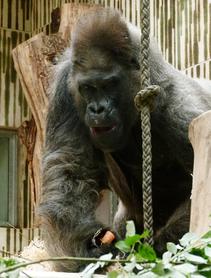 In 2013, WWF started the campaign "Draw the Line" to stop the British oil company SOCO's explorations for oil in the Virunga National Park, Democratic Republic of the Congo. Hundreds of thousands of supporters signed up for this campaign. In June 2014, the news was spread in the media that SOCO International had signed a declaration with WWF that said they would not drill for oil in the national park. Unfortunately, this does not mean that the park will be safe from their activities; in the meantime SOCO stated that they will not abandon the exploitation of these resources. Experts are concerned that the Congolese government may redraw the park's boundaries to allow SOCO oil exploration outside of the World Heritage Site. But the World Heritage commission may not accept this.

Soldiers take money from SOCO, as is shown in the new documentary Virunga that is available on Netflix, and the company even tried to bribe and intimidate park rangers. Villagers who opposed the project were beaten by soldiers. A warden who tried to prevent SOCO employees from erecting a mobile phone antenna in the park was kidnapped and tortured. And Emmanuel de Merode, the park's Director, was shot.

The organisation Global Witness published a report, Drillers in the Mist, in September 2014, that reveals SOCO's methods. It shows that SOCO and its contractors have made illicit payments to authorities and politicians, appear to have paid off armed rebels and benefited from fear and violence fostered by government security forces. These findings are mainly based on undercover recordings gathered as part of an investigation for the Virunga documentary.