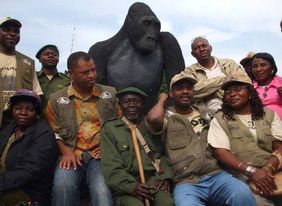 The gorilla statue with the Vice-Governor of South Kivu, Jean Claude Kibala (the 4th person from the left) (© Radar Nishuli/Parc National de Kahuzi-Biega)

After the death of the two silverbacks of these gorilla groups on March 26th and May 30th 2009, respectively, several friends of the gorillas of the Kahuzi-Biega National Park (KBNP) expressed interest in knowing how these groups have been doing since they lost their leading males. While Mufanzala died from a liver abscess, Birindwa seemingly died of old age: his autopsy did not indicate any disease.

Members of gorilla groups transfer to other groups either during the interaction of two males, when the weaker silverback may lose members of his group to the stronger male, or after the death of a silverback. In this case, the leaderless group is fragile and is susceptible to splitting up when they come into contact with another group, be it habituated or un-habituated.
In the case of Mufanzala, the team of guides and trackers continues to follow the now leaderless group, which continues to range through the same forest sectors as during the time when their silverback was still with them. A young silverback is trying to keep the group together, despite the fact that a number of females tend to split off for a duration of 3 or 4 days at a time.
As far as the Birindwa group is concerned, a young silverback joined the group after the death of Birindwa. He now seems to have taken charge of the females. However, even those group members who had begun to tolerate the presence of humans a few months ago no longer do so because the new male does not tolerate people's presence. During contacts with guides and trackers he charges and drives the females into vegetation cover to hide.
The Government of the Democratic Republic of the Congo is making efforts to pacify the region and to stimulate the economy of Kivu Province. As part of this process, the Kahuzi-Biega National Park is preparing to participate in the economic upturn through the development and promotion of responsible tourism. With this in mind, the park approached the political, administrative and traditional authorities - as well as all those responsible for state services - to Tshivanga on the occasion of International Tourism Day (which is celebrated on September 27th each year). The authorities were invited to visit the different tourism attractions and experience the wonders of Kahuzi-Biega. The attendance of Jean Claude Kibala, Vice Governor of the Province and the head of the delegation, encouraged the park authorities and rangers, as did his promises to spare no effort to persecute any persons violating the territory of the park.
The objective of this event was not only to show the decision-makers the wonders of the park but also to appeal to their conscience, such that they adopt a positive attitude towards the protection of their heritage. It also serves to raise awareness of the fact that tourism is an income-generating industry invaluable for the reconstruction and the development of the Democratic Republic of the Congo in general, and Kivu Province in particular. Their involvement in the conservation of the KBNP is an absolute requirement for this. The event was also an appropriate opportunity for the unveiling of the statue that the park managers have erected at the park entrance on the occasion of the International Year of the Gorilla.