Initiation of an Aid Project 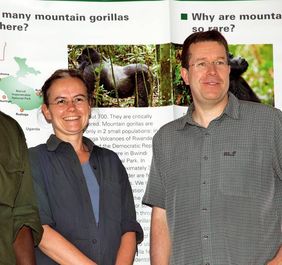 Relaxing after the seven displays have been put up in Ruhija. Left: Martha Robbins, right: Andreas Klotz (© www.mondberge.com) 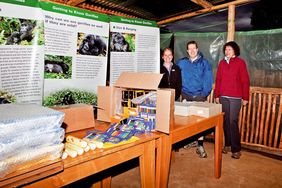 Hand-over of displays and other materials to Martha Robbins on the first evening (© www.mondberge.com) 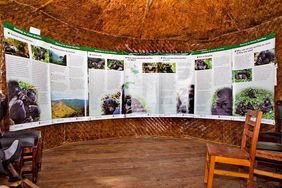 The seven displays in all their splendour (© www.mondberge.com)

The project "Mountains of the Moon" was founded in the middle of 2008, with the aim of contributing to the protection of species through the production and marketing of different media products. Its objective is to use journalism to inform a broad public, to entertain and to inspire - in order to raise consciousness about and help the mountain gorillas. In January 2009 a team of 8 photographers and authors travelled to Uganda. During a 9-day tour they visited the Rwenzori Mountains and different national parks, including the mountain gorillas in Bwindi Impenetrable National Park. On their return to Germany, they designed a book, postcards, posters, a DVD and a multimedia show with the material they collected during their trip. A fixed part of the turnover of all these products is donated to the Berggorilla & Regenwald Direkthilfe to support a joint long-term project in Uganda - a project which has now become a reality.

On 31 October, 2009, we were finally off. Six of us, including 3 members of the Mountains-of-the-Moon photographers' team, took the plane from Brussels to Uganda, with an excess baggage of 100 kg! Our destination was Ruhija, a small village close to Bwindi Impenetrable National Park. After 8 hours in the plane and a 10-hour car journey we finally reached Ruhija without a hitch, and we checked in for 3 nights at one of the three brand-new lodges, situated in a very beautiful location on a hilltop.
At approximately 2,500 m, Ruhija stands at the highest altitude of any town in the neighbourhood of Bwindi, and on the first evening we had a wonderful view of the Virunga Volcanoes chain further south from our lodge.
The Bitukura gorilla group was habituated here as recently as 9 months ago, and can now be visited by tourists, although permits are currently sold only by UWA (Uganda Wildlife Authority) and must be applied for 3 months in advance. The first lodges had opened their doors only a few weeks ago; in contrast to sites such as Buhoma, Ruhija still has almost no tourism infrastructure.
Ruhija is the base of the ITFC (Institute of Tropical Forest Conservation), and for 4 months a year is the home of Martha Robbins, who has been studying the life and the behaviour of the Bwindi gorillas for 11 years. Before our journey to Uganda we exchanged many emails with her: she worked with ITFC to prepare our aid project in coordination with Berggorilla & Regenwald Direkthilfe. Only 4 months after our book Perle Afrikas (The Pearl of Africa) was published, over 3,000 Euros were already available. We met Martha Robbins on the first day, and the following day she accompanied us in and around Ruhija.
Of course, we did not want to miss the opportunity to track gorillas. It was very exciting on this occasion to see recently habituated gorillas that are visited only rarely by tourists. After having been well briefed by Chris, our guide, we entered the forest at around 9:00 h, equipped with sticks and cameras. There was bright sunshine although it was the rainy season. Martha had already assured us that it probably would not take very long before we found the gorillas.
Around Ruhija, the forest is somewhat denser and much steeper than in Buhoma. We walked downhill almost all the time. And, yes, we found the Bitukura group after only 1 hour and 5 minutes. At the moment, the group consists of 15 members, 4 of which are, unbelievably, silverbacks! Not all group members showed themselves to us, but those who did remained visible for long periods of time and in ideal conditions for taking photographs. For example, at one point, 3 silverbacks sat together on the forest path for several minutes.
Each gorilla tracking is different; every time it is a special experience!
The first specific activity of the "Mountains of the Moon" aid project was the production of 7 different large-size displays (1 x 1.8 m). These were designed with texts written by Martha Robbins and photographs from our project and Martha Robbins. Four copies of each motif were printed and taken to Uganda. They will be used in Ruhija, Buhoma, Nkuringo and Rushaga.
We had to roll up our sleeves and mount the first set of displays in Ruhija ourselves. Hooks? Nails? Wires? Good ideas, but no one from the team had remembered to bring any. So we found an "African solution": we pulled rusty and bent nails out of a pile of old boards, hammered them more or less straight and after a short time the displays were up and being admired by us, and by the local UWA staff and some tourists who had dropped in by chance. The displays are to assist in educating tourists AND local residents about the gorillas - printed in large, clear and simple words they cannot easily be overlooked. The aim is to generate a better understanding and ensure that the rules for gorilla tracking are followed more closely. Martha Robbins was very happy about the displays, and she will distribute the remaining ones around Bwindi Impenetrable National Park.
A nature trail, which will take about one-and-a-half hours to walk, will be established as another tourist attraction in Ruhija; this will generate additional income for the village. Women from the village will soon offer it as a guided tour. We also intend to produce a small, printed nature trail guide which they will be able to sell to tourists.
After visiting a primary school, a plan was hatched to produce a "gorilla book" in English and the local language. We will start on this new project as soon as we receive the texts from Uganda. As requested, we had brought chalk, crayons, pens and maps; the children were very happy and entertained us with several dances and songs.
The core function of the "Mountains of the Moon" aid project initiated by us is to support the training and awareness raising of the local population in the vicinity of Bwindi National Park, and therefore to contribute to the long-term conservation of the forest and the mountain gorillas. It thus also addresses one of the UN goals for the 2009 Year of the Gorilla. The project initiation was witnessed by Veronika Lenarz, who represented UNEP/CMS (United Nations Environment Programme/Convention on Migratory Species) during our trip to Ruhija.