History of Habituated Gorillas in Bwindi 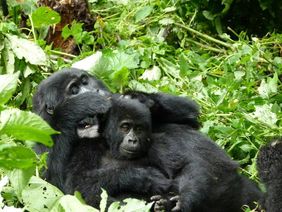 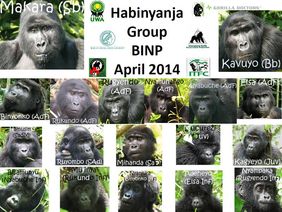 The members of one habituated group 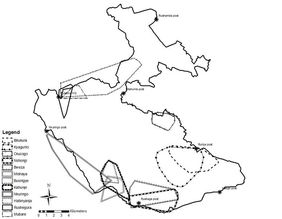 Habituation of wild gorillas has long been a useful tool for research and conservation programs. Decisions to habituate gorillas typically reflect a balance of the benefits gained and the costs/risks. In general, the benefits include that it: generates revenue through tourism for governments, local communities, and businesses; enables detailed research on feeding ecology and social behaviour; provides daily protection for the groups monitored; enables gorilla health monitoring; pro­vides a mechanism for examining trends in population dynamics by monitoring births, death and dispersal patterns. In contrast, the costs of ha­bituation are that it: increases risk of disease through exposure to humans in close proximity; increases risk of poaching due to loss of fear of humans; requires financial resources and staff to monitor habituated gorillas as a lifelong commitment. Both the costs and benefits can be illustrated in all locations where gorillas have been habituated. For example, several habituated Grauer’s gorillas were killed during the political instability in Kahuzi-Biega National Park, Democratic Re­public of the Congo (Yamagiwa 2003) and evidence of a virus transmitted from humans was found in Virunga mountain gorillas suffering from res­piratory disease (Palacios et al. 2011). The economic benefits derived from gorilla tourism can be large, but may come to a halt due to political instability, which is the current situation in Dzanga-Sangha National Park, Central African Republic.

Conservation and research efforts in Bwindi Impenetrable National Park, Uganda, which contains about half of the remaining mountain gorillas in the world, did not begin in earnest until the early 1990s following it being gazetted as a national park in 1991. This is in contrast to the mountain gorillas of the Virunga Massif, which have been the focus of intense efforts since the last 1960s. Over the past two decades Bwindi Impenetrable National Park has experienced many changes, notably an increase in the number of habituated groups from 3 to 12, which we describe here. Among the many conservation strategies that have been developed by Opens external link in new windowUganda Wildlife Authority (UWA), gorilla tourism was at the top of the list for generating funds for conservation activities and also creating alternative sources of income for local communities, a move intended to create a win-win situation for conservation and development. Overall, gorilla habituation in Bwindi can be viewed as occurring in three phases.

The first phase of habituation occurred in the early 1990s with the Katendegyere Group and Mubare Group, both ranging around Buhoma. Habituation of both groups started in 1991 and they were opened for tourism in 1993. The Katendegyere Group initially contained 11 gorillas, but by 1998 it had decreased to only 3 gorillas. At this time, the group crossed into the Sarambwe Game Reserve in the Democratic Republic of the Congo (contiguous with Bwindi) and the group could no longer be monitored by UWA. There are reports of mountain gorilla groups in this area, but the fate of the Katendegyere group is unknown. The Mubare Group initially contained 13 gorillas and had only 5 gorillas at one point. The silverback that led the group when first contacted, Ruhondeza, had an impressively long tenure of more than 20 years and died in 2012. The group has gone through a variety of changes in recent years and currently contains 10 members.

Concurrent to gorilla habituation for tourism, one group was habituated for research purposes. Habituation of the Kyagurilo Group began in the early 1990s in the Ruhija area of Bwindi, as part of research efforts of the Institute of Tropical Forest Conservation. In 1995 this group suffered a poaching attack, resulting in the death of 4 group members. Intense research efforts on this group by the Max Planck Institute of Evolutionary Anthropology have been ongoing since 1998. The group size dipped as low as 10 members in 2010, but it currently contains 18 individuals. Since 2012 this group also has been used for tourism during times of peak demand.

The second phase of gorilla habituation occurred in the mid-1990s, following a growth in the tourism market. Since the Katendegyere Group had become so small, another group was habituated in the Buhoma area. The Habinyanja Group contained more than 25 gorillas in 1997 and it fissioned into two groups in 2002. The smaller group initially consisted of only 8 gorillas and was named the Rushegura Group.

Additionally, in an effort to spread the growing benefits of gorilla tourism and improve conservation efforts in other regions of the park, it was decided that gorilla tourism would be expanded outside Buhoma. As a result, habituation of the Nkuringo Group in the southern region of Bwindi began in 1997. However, due to various challenges including the need for infrastructure development, the group was only opened for tourism in 2004.

The third phase of gorilla habituation was the result of persistent growth in demand for gorilla tourism and the urge to introduce gorilla tourism elsewhere around the park as means of enhancing conservation and development. Gorilla tourism was earmarked as a major revenue earner and notable employer of numerous local people. Thus, initiatives to equitably distribute such opportunities around the entire protected area took centre stage and more gorilla groups were habituated in various sectors of the park.

The habituation of Bitukura Group (in the northeastern region around Ruhija) and Nshongi Group (in the southern sector of the park) began in 2006 and both groups were opened for tourism in 2008. Based on the results of the 2006 park-wide gorilla census, the Nshongi Group was the largest group in the park with more than 30 members. However, in 2014 it contains only 8 gorillas. The dramatic change in group size is largely the result of two fission events. First, in 2010 the silverback Mishaya moved out with 8 other group members. In 2012, the silverback Bweza separated from the group with 9 individuals. Both resulting groups go by the names of these silverbacks. Mishaya died suddenly in early 2014, and according to UWA a new silverback took over the group.

Habituation of two additional groups began in 2008 and both were opened for tourism in 2010. The Kahungye Group ranges in the southern sector of the park, near the Nshongi Group. It also was initially a very large group, containing nearly 30 gorillas. In March 2012, the group fissioned with 9 members splitting off to form the Busingye Group. The Oruzogo, ranging to the west of the Ruhija area initially contained about 20 gorillas, but has reduced in size slightly due to emigrations.

The group fissions, births, deaths, emigrations and immigrations observed in the habituated groups all reflect natural demographic processes that are typical for a species that lives in social groups. Gorillas are one of only a few primate genera in which both males and females may either remain in or disperse from the group in which they were born.

Males seek to attain the dominant silverback position of a group by either queuing for alpha status in the natal group or becoming solitary to attempt to attract females to form a new group. As a result, we see both one-male and multimale groups, with the latter sometimes fissioning into two groups. Understanding these demographic processes is largely possible by monitoring habituated groups. By regularly collecting data on the habituated gorillas we have also been able to determine that Bwindi gorillas had a lower birth rate and a longer interbirth interval than the Virunga gorillas (5 years compared to 4 years), which suggests that the overall growth rate of the population is likely lower in Bwindi (Robbins et al. 2009). Such information can be used concurrently with studies on gorilla health and ecological conditions to best understand this species' biology and contribute to conservation management strategies.

The most recent park-wide census conducted in 2011 estimated that a minimum of 400 gorillas live in 36 social units in Bwindi. At that time, the 168 gorillas in the 10 habituated groups represented 42% of all the gorillas and 28% of all the groups in the park. In contrast, this value is much lower than the 349 habituated gorillas out of 480 detected (73% of the population; 24 of 36 social groups) found at the time of the 2010 census in the Virunga Massif (Gray et al. 2013). Most of the remaining unhabituated groups in Bwindi live in the interior of the park that is not accessible as a day trip and therefore would be unsuitable for tourism. The number of tourists viewing gorillas in Bwindi has increased from approximately 3000 per year in the 1990s to more than 15,000 in recent years.

The details described in this article are a result of dedicated efforts from various stakeholders in mountain gorilla conservation over the past decades, spearheaded by Uganda Wildlife Authority (UWA), and include the International Gorilla Conservation Programme (IGCP), Mountain Gorilla Veterinary Project (MGVP), Wildlife Conservation Society (WCS), Conservation Through Public Health (CTPH), Max Planck Institute for Evolutionary Anthropology (MPI-Evan), and the Institute of Tropical Forest Conservation (ITFC).