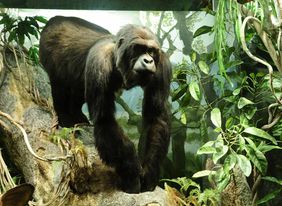 Pucker in her diorama setting in the FMNH (© Janne Granroth)

Dian Fossey's famous book Gorillas in the Mist (1983) contains several memorable episodes from her years of studying the mountain gorillas in the Virunga Mountains. One of them is the story of Coco and Pucker, the two juvenile females which were captured from the wild and destined for the Cologne Zoo, (West) Germany.

The capture of Coco and Pucker in 1969 was sanctioned by the Rwandan government. Fossey, however, strongly disapproved of the affair, especially when she subsequently learned that in order to capture these young gorillas, the hunters who were assigned for this task apparently killed all the other members of both Coco's and Pucker's respective family groups (Fossey 1983). She also feared that mountain gorillas would not fare well in a European zoo. Nevertheless, Fossey volunteered to nurse both Coco and Pucker to health after their capture, in order to increase their chances of surviving the trip to Germany. In Fossey's care, both Coco and Pucker did indeed rapidly regain their strength.

In May 1969, Coco and Pucker arrived in Cologne Zoo, where they would live for nine years. Originally, it was believed that Coco was male and the zoo thought that it had received a potential breeding couple. However, a chromosome test in the early 1970s showed that both gorillas were females (Henning 1974). In 1978, Coco and Pucker suddenly succumbed to bacterial infection within a few months from each other. Coco died on April 5, 1978, and Pucker on June 6 in the same year. An autopsy was performed on both animals; it was found that Coco and Pucker suffered from congenital immune system defects (Krüger 1979).

Coco and Pucker's earliest days in captivity have been recounted both by Fossey herself (1970, 1983) and by others (e.g., Mowat 1987). Rather less has been published about Coco and Pucker's later life, but the fact that they did indeed end up in Cologne Zoo is widely known. However, what happened to these two gorillas after their deaths has received little attention, at least in print.

Originally, Coco and Pucker ended up as specimens in the collections of the Alexander Koenig Research Museum (or the Zoologisches Forschungsmuseum Alexander Koenig, ZFMK) in Bonn, Germany (R. Hutterer, personal communication). At the time of Coco's death, the possibility that her skin should be preserved as a museum specimen was apparently not considered. During the autopsy, Coco's head, including the skin, was detached from the rest of the body, thus making the skin unusable for taxidermy purposes. Pucker's skin, however, was kept intact after her death.

The ZFMK had traditionnally close institutional ties with the Finnish Museum of Natural History (FMNH) in Helsinki, Finland. These two museums exchanged zoological specimens on several occasions in the early 1980s. It was as a result of one such specimen exchange that Coco and Pucker's remains eventually ended up in the FMNH. Pucker's skin was made into a taxidermy specimen and she has been on public display in the FMNH since 1985.

In the FMNH, Pucker has been placed in a diorama with a Virunga Mountains setting, positioned on a sloping, moss-covered tree trunk. Pucker is mounted in a quadrupedal pose which is similar to that of a mountain gorilla in one of Robert Campbell's photographs, originally published in the National Geographic magazine (Fossey 1971, pp. 574-575). Pucker's skull and virtually complete skeleton are not on display; they are part of the FMNH's research collection (where they have been given collection number UN 1416). Coco's skull and the skin of the head are unfortunately missing, and are presumed lost. However, most of her postcranial bones (collection number UN 2718) as well as the rest of the skin (UN 1720) are preserved.

Pucker's skull is in fairly typical condition for a female gorilla of her age, which was estimated to have been circa 13 years at the time of her death (Krüger 1979). All permanent teeth are in place, with the exception of the mandibular third molars which were still erupting (cf. Smith et al. 1994). Pucker has, in addition to 7 cervical vertebrae, 13 thoracic, 3 lumbar, and 6 sacral vertebrae, i.e., the typical mountain gorilla vertebral formula (Williams 2011, Thompson & Almécija 2017). Coco's vertebral column is incomplete. The first cervical vertebra (the atlas) is missing, and while there are 13 thoracic vertebrae, only two lumbar vertebrae and no sacral or cervical vertebrae are preserved.

Coco and Pucker have ended up far away from their native Rwanda. Their lifespans were, sadly, not as long as they ideally should have been, and neither one of them ever had any offspring. However, their earthly remains are, at least for the most part, preserved for posterity. Thus Coco and Pucker still serve as silent ambassadors for their endangered species, long after their deaths.

We thank Risto Väinölä and Martti Hildén at the Finnish Museum of Natural History LUOMUS for providing us with access to specimens in their care, Rainer Hutterer, Eva Bärmann, and Erik Weckman for providing us with valuable information, and Jeroen Stevens and Sonja Koski for help with the literature.

Mowat, F. (1988): Woman in the Mist: The Story of Dian Fossey and the Mountain Gorillas of Africa. Macdonald, London & Sydney

Smith, B. H. et al. (1994): The age of eruption of primate teeth: a compendium for aging individuals and comparing life histories. American Journal of Physical Anthropology 37, 177-231