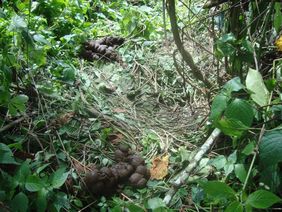 All species of great apes construct night nests; sometimes in trees and sometimes on the ground. This article is based on daily long-term observations focused on the nesting and the size of the groups of the Grauer's gorillas (Gorilla beringei graueri) ranging in the Kahuzi-Biega National Park (KBNP), particularly groups in the highland sector.

Gorillas in general live in families, although some males can live alone. In one gorilla family, several mothers and young are led by a leader male called a silverback. Each group has its own home range. In the highland sector of the KBNP, the home range of a gorilla group is composed of different vegetation types as well as secondary, primary, swamp and bamboo forests located between altitudes of 2050 and 2600 m. A gorilla group is observed living in its home range for many years foraging on different vegetation types depending on the seasonal availability of foods. They make new nests at a new site every day. They sleep during the night and travel during the day; leaving the night nests in the morning and beginning to move, then feeding and resting until they construct another night nest at a different site.

A gorilla family is usually composed of the silverback (the dominant male), several adult females, one or several blackbacks, juveniles and infants. Gorillas live in a hierarchy; the dominant male, the silverback, has the leadership of the group, and he protects the group, decides where to move throughout the home range and makes the choice on where to spend a night. He also has the freedom to mate with any female in oestrus and is the first member to fight when an intruder is in his home range.

Females also have a hierarchy. An aged female can be the alpha female for some time, or a female with a new born ranking higher than other females has also been observed being the alpha female. The alpha female is always next to the silverback when traveling, resting, feeding or when making nests. Blackbacks are dominated by the silverback. Juveniles are friends among themselves, play sometimes with blackbacks and often with babies during the day when the groups rest.

There are differences between the seasons when gorillas leave their night nest site: during the rainy season each gorilla group or solitary male leaves the nests at around 6h00 AM and begins foraging, possibly because of food abundance; and during the dry season toward mid-August to mid-October, each group or solitary male wakes up earlier from the nest, sometimes as early as 5h30 AM, and starts feeding, possibly due to food scarcity.

There are two different nests made by the gorillas: day nests and night nests. Of these two types of nests, there are both fake nests and real nests.

After feeding during the morning, gorillas take some rest during the daytime. The members of the group sit down around the silverback. Some members, especially the youngsters (juveniles and infants), play among themselves. Adult members, such as adult females carrying babies, and the silverback groom each other. After the grooming some members start to yawn more. Some juveniles start cutting branches and gathering them together in a tree, to sleep on top of them. Adult group members sleep on the ground without constructing nests. The group stays quiet without moving as they sleep; some of them sleep deeply and can then be heard snoring. This siesta time varies between 30 minutes and 1 hour. By the end of the resting time, noises are made by either the silverback or by adult females, which is the warning to wake everybody up to leave soon. The group leaves one after the other, all following in the direction of the silverback.

The day nests are constructed by the members of the group who are capable of doing so. The unique aspect of the day nests (upper or lower) is that they do not have dung in the nests; instead urine and some dung can be observed around them. The night nests always have dung and urine either in or on the edge of the nest. Dung and urine are indicators of real gorilla nests. Some group members leave dung inside their nests and sleep on top of it in the night (possibly to stay warm during the night). The silverback does not construct night nests, but rather digs a sort of bowl on the ground and simply sits on top. The larger dung balls and the size of the "bowl" will indicate that it is the nest of the silverback. The silverback rarely sleeps on top of his dung, which is usually outside of the nest. Other members may not sleep on top of their dung, but rather their dung is on the edge of the nests. 10% of the Grauer's gorilla night nests bear squashed dung, and in 90% of cases dung is found - not having been squashed - on the edge of the night nests in the highland sector of the KBNP. Flies are always observed flying on top of the night nests rather than the day nests. It is another indicator to tell which is a night nest and which a day nest.

The "fake nests" are constructed mostly by dependent group members; they are created when gorillas make nests at a site but must then discard them when the silverback does not camp in that site. Three observations about dependent gorillas constructing fake and real nests have been made during daily observations over a period of 33 years.

The gorilla group will be led by the alpha female when the silverback delays and does not go to the head of the group. If she stops at a site, members may make nests. The silverback then crosses the area and decides to move on to another site of his choice.

If the group stops at a site where there is an ant nest, once they have built nests and sleep on them, they will be bitten by ants. The group will discard the nests and move to another site where there are no ants. The first nests will have no dung or urine, whereas the latter will have dung (squashed and/or not squashed), urine and the associated flies flying above them in the morning.

There are two methods to count the number of individuals in the group:

Direct method: When gorilla members are seen in a group being tracked each day, members are directly counted and their age-class identified;

Indirect method: When a group is not tracked and the members cannot be identified directly, the real nests are counted (those with dung in or around them). Dung in the nests must also be analyzed, because in nests with a female and dependent offspring there will be two sizes of dung (mother’s and baby's).