Gorilla Habituation for Research and Tourism in Loango 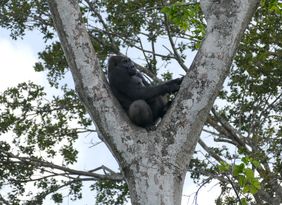 The silverback Kamaya in an Iroko tree (© Martha M. Robbins)

Two components of gorilla conservation are research and tourism. Research provides the baseline information concerning the natural ecological and behavioural repertoire of a species and it provides a measure of the effectiveness of conservation strategies. Tourism provides much needed revenue for conservation activities and raises awareness about apes. Mountain gorillas (Gorilla beringei beringei) have been studied intensively for decades and ecotourism has proven to be a successful conservation strategy. In contrast, despite their much broader distribution and larger overall population size, only a few western gorilla groups (Gorilla gorilla gorilla) have been successfully habituated in a handful of locations. Since the late 1990s western gorillas have been habituated in Bai Hokou (Central African Republic), Mondika (Republic of Congo), and more recently, Moukalaba-Doudou (Gabon).

As a result, we know relatively little about western gorillas compared to mountain gorillas. To address this issue, the Max Planck Institute for Evolutionary Anthropology started a project to habituate western gorillas for both research and tourism purposes in Loango National Park, Gabon in 2005. The main goals of this project have been to better understand the ecology, behaviour, and demography of western gorillas as well as to establish gorilla tourism as a conservation strategy in collaboration with the Gabonese National Park Authorities.

Because gorillas are naturally afraid of humans, it is necessary to have them habituated to human presence. Habituation is the process of repeated neutral contact with human observers so that the gorillas gradually lose their fear of humans, making it possible to watch them from close distances. It may take only one to two years to habituate mountain gorillas, whereas it can take five or more years to habituate western gorillas. The first challenge is to simply find the gorillas, because if you are not encountering any gorillas, you cannot begin to habituate them. Gorillas occur at a low density in the forest, which translates into a low probability of simply bumping into them if you are walking through the forest. However, it is possible to see footprints, remains of plants that they have eaten, or feces. Then you can 'track' where they have moved through the forest, if you are skilled enough to see the signs that are often extremely subtle and difficult to see. Mountain gorillas live in forests where there is a dense understory of herbs and shrubs so that it is relatively easy to see where they have gone, which makes them much easier to track and contributes to why it takes less time to habituate them than western gorillas.

To track gorillas, most western gorilla sites, including Loango, rely on Pygmies, a group that has been marginalized across Africa and does not have many employment opportunities. By working as trackers, they are able to use their traditional knowledge and skills concerning tropical rain forests and wildlife, providing invaluable assistance to the process of habituating western gorillas.

Once we find the gorillas, the next step is to 'convince' them that we mean no harm and that we are simply neutral items in their environment. However, initially they typically flee immediately upon seeing any humans. It can take months and months to see a change in behaviour, in which the gorillas will wait a few minutes before running away, and then even more time passes before they will exhibit their normal behaviour with people nearby. Furthermore, if the gorillas feel threatened at a close distance, the silverback male will defend himself and his group by charging. However, these charges are primarily displays as most animals do not want to engage in actually attacking an opponent due to the risk of getting hurt themselves. Slowly over time the gorillas become more accepting, eventually develop ‘trust’ of their human observers, and allow us to watch their lives.

We had a few 'false starts' with habituating gorillas in Loango. Initially we were based in a region that contains very few gorillas, making it difficult to consistently follow the same group. Second, we shifted our work to an area containing more secondary forest and swamps. We focused on a group for 1-2 years that eventually diminished in size (less than 7 gorillas), making them less than optimal for research and tourism. Starting in 2009, we have habituated the ‘Atananga Group’, which currently contains 16 gorillas: 1 silverback, 6 adult females, 4 juveniles, and 5 infants. We are able to spend 8 or more hours with the group on a nearly basis.

Loango is ecologically distinct from other locations where western lowland gorillas have been studied. It contains a mosaic of habitat types including coastal forest, savannah, swamps, secondary forest, and primary forest. Several of the herb and fruit species commonly eaten by western gorillas at other locations are absent or found in very low abundance in Loango. We have documented large differences in the feeding ecology of gorillas in Loango compared to other sites. Therefore, this location provides us with an opportunity to better understand the ecological and behavioural flexibility possible in gorillas. We are using a data collection protocol that is nearly identical to the one used by my long-term research project in Bwindi Impenetrable National Park, Uganda, which will enable us to make direct comparisons of a variety of behaviours between the two species of gorillas.

The project is jointly managed by the Agence Nationale des Parcs Nationaux (ANPN), the Gabonese national park authorities. Gorilla tourism began in June 2016 and to date, there have been about 10 tourist visits. Currently ANPN is limiting tourism to only two days per week and we are adhering to the IUCN best practice guidelines for great ape tourism. These include having a maximum of only 4 tourists per one hour visit per day, maintaining a seven meter distance between humans and the gorillas, and wearing surgical masks to reduce the risk of disease transmission from humans to gorillas. We are also collecting data on the gorillas’ behaviour to monitor if tourism is having a negative impact on the gorillas.

Visiting western gorillas is a different experience from seeing mountain gorillas, partially because western gorillas spend more time in the trees, group members typically do not maintain as close spatial proximity to one another, and they travel more per day. It is important to remember that western gorillas are in fact a different species of ape from mountain gorillas, living in a very different habitat - making it all the more interesting to observe them in the wild. Getting to Loango from Libreville in one day is possible and tourist facilities are available in the park. Stay tuned for more interesting findings from this project.