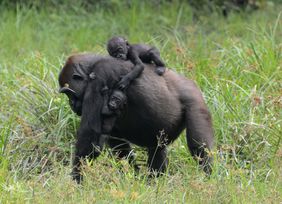 At the end of January 2016 the Dzanga-Sangha Protected Areas complex in the Central African Republic recorded the first ever western lowland gorilla twins to be born in a habituated group. Since 1998 WWF through its Primate Habituation Program habituates western lowland gorillas for tourism and research, creating employment for local people, generating much-needed revenue for conservation activities and strengthening the vital links with the local community. Twins in western lowland gorillas are rare so the news was welcomed with excitement and made a "media splash".

Very early in the morning of January 25 the habituation team found the (then) only female of the Makumba group in Bai Hokou, Malui, limping through the forest on one arm. The first thought that came to their mind was that she had an injury but as they looked closer they realized she was holding on to a baby on the other arm. At this time the group was ranging in very dense vegetation with almost no visibility. It was only two days later when the group entered a forest clearing to feed that the team observed two very little, naked babies attached one to each of Malui's breasts. It was heartwarming to see the passion and strength Malui invested in her beautiful offspring. The group stayed close together, with both Malui and the silverback (Makumba) being more protective than ever before.

The babies were later named Inguka and Inganda by the Ba'Aka forest people whose exceptional tracking skills form the backbone of the habituation process. Inganda is a forest shrub of the family Papilionaceae of which gorillas consume the leaves (Malui used them as a cushion on which the babies were born), while Inguka is a forest shrub of the family Acanthaceae and gorillas consume its leaves especially during the dry season, when the gorillas depend more on leaves than on fruits. The highly pregnant Malui was feeding a lot on these leaves. The twins are non-identical both in size and nose prints. Inguka is slightly bigger than Inganda and has a nose print similar to Malui thus helping the identification of the individuals.

The mother of the twins (and dominant female of the group), Malui, is a very experienced female who has successfully raised three offspring sired by the silverback Makumba. Apart from the three offspring she had a stillborn in December 2011, and exactly 11 months later she had another infant who unfortunately fell off a tree two years later. As the three other females in Bai Hokou left the group after losing an infant, it was feared that Malui would also leave. Instead she stayed and surprised everyone with twins. She struggled in the beginning as the babies were unusually small and required that she carry them around pressed onto her breast for about one month. Later she would place the bigger twin (Inguka) on her back with Inganda still attached to her chest. She quickly gained the skills required for this difficult task and against all skepticism the twins are growing well.

Despite their unusually tiny nature, they soon started exploring their environment as every other gorilla baby would do, even though too small and feeble to move very far. Interestingly at this period their older sibling, an 8.5-year-old young male, Tembo, and another older half-sibling, Sopo, became very curious and interested. The first approaches by the siblings were timid but after intense observation they started grabbing one of the babies and running off with it. At first Malui did not tolerate this behaviour and would follow the "hijacker" to rescue her offspring, the cue for a game of "play catch". However, as the bigger twin (followed by the smaller one two weeks later) grew stronger and explored further away from the mother, Sopo and Tembo would grab them occasionally, and Malui would allow it.

From the end of July when the twins were 6 months old at least one of them was constantly with its siblings. Even though Malui took them back regularly, she had no problem with sharing the work raising two babies at the same time. She would even, apparently relaxed, pass both twins to the others to feed, but she would never be out of sight. The older siblings, being so keen on the twins, would involve them in their play sessions, which unfortunately would get so brutal that the babies would emit distress noises and loud cries causing the silverback and leader of the group, Makumba, to intervene. Nonetheless, as July-August is the peak of the fruiting season in Dzanga Sangha, fruit-rich diet provides all individuals with extra energy, promoting more playing for the youngsters in the group, and it became difficult for Makumba to keep them under control. On one occasion Tembo in an over enthusiastic mood even hit one of the twins on a tree and threw it on the ground.

Raising twins is undoubtedly a difficult task. It is uncertain what will happen as they grow bigger; we expect however that Malui would need assistance from the other group members especially when they get too big to carry around. It is interesting to observe that she is already accepting support not only from the subadults in the group but also from another adult female who joined the group last February. She will also need the protection of the silverback. Makumba has proven his competence as leading silverback and protector of the group for over 19 years, siring at least 14 offspring, and he definitely has a part to play in assuring the survival of these two.

The critically endangered western lowland gorillas face serious threats from poaching, disease and habitat loss across Central Africa. Also, they have a slower life history than mountain gorillas (Breuer et al. 2009), leading to low population growth rates that will affect recovery from population crashes. Such insecure future is the reason WWF is working with governments and partners throughout the region to protect them and their forest habitat. These tiny twins therefore symbolize incredible hope and success for the region.