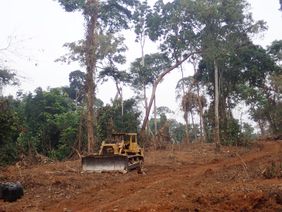 Protecting forest corridors that allow movement and genetic exchange between Cross River gorilla subpopulations and groups is critical to their long-term survival. The Afi River Forest Reserve, which covers approximately 380 km²,is an important corridor linking the Afi Mountain Wildlife Sanctuary to the Mbe Mountains and the contiguous Okwangwo Division of Cross River National Park - the three sites where gorillas are found in Nigeria.

The loss of this important corridor will have consequences for the long-term viability of the small, increasingly isolated population of gorillas living in the Afi Mountain Wildlife Sanctuary. This is why WCS and other stakeholders in Cross River State were alarmed by recent reports of the bulldozing of large tracts of forest within the reserve. In early 2019, WCS received reports of extensive clearing of the southeastern axis of the reserve with bulldozers, ostensibly to establish a cocoa plantation. While farm encroachment and illegal logging within the reserve are existing threats, the recent invasion of the reserve by an unknown group supposedly for large-scale cocoa farming gives a new dimension to the problem. Preliminary investigations by WCS revealed that the clearing started after an unknown group of people held consultations with one of the surrounding communities apparently to obtain the community's support with the promise of joint ownership of the farm to be established. Although WCS reported the illegal activity to the Cross River State Forestry Commission that manages the reserve, the bulldozing continued for weeks unchecked. Fortunately, with sustained pressure from WCS, the clearing eventually stopped and the bulldozers moved out of the forest. Efforts to identify the people behind the clearing and what kind of authorization they may have had were not successful. Similar unconfirmed reports have been heard of the acquisition of land in other forest areas of the state for large-scale cocoa farming.

Early this year, the federal government of Nigeria announced plans to provide intervention funds to boost the production of cocoa, oil palm and other cash crops as part of efforts to boost exports. Following in the footsteps of the federal government, the Cross River State government has also announced renewed commitment to increase cocoa and oil palm production in the state. While this renewed interest and commitment of government to boost agricultural production is commendable, any planned increase in cocoa and oil palm production should be done in a way that minimizes impact on biodiversity, targeting already degraded areas rather than the state's remaining forest.

WCS calls on the Cross River State Forestry Commission to take measures urgently to stop further deforestation of the Afi River Forest Reserve to enhance the survival prospects of the population of Cross River gorillas in the Afi Mountain Wildlife Sanctuary that needs the corridor provided by the reserve to move and have genetic contact with other groups.