Conservation in the Mbe Mountains, Nigeria 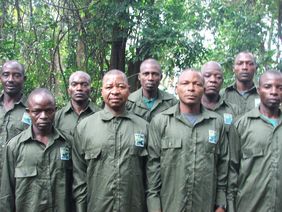 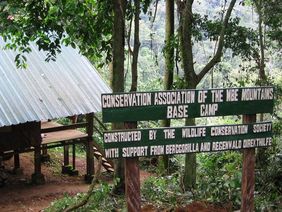 Base camp in the Mbe Mountains (© Andrew Dunn)

The Cross River gorilla (Gorilla gorilla diehli) is Africa's most endangered taxon of ape, threatened by bushmeat hunting, conversion of forest for agriculture, and small-scale logging. Recent genetic analysis suggests that the 11 known Cross River gorilla localities are not isolated from one another, but the small size and fragmented distribution of the Cross River gorilla means that the maintenance of habitat corridors is essential for their long-term survival. The Mbe Mountains in Nigeria are a critical link in the forest landscape connecting Afi Mountain Wildlife Sanctuary with the Okwangwo Division of Cross River National Park and Takamanda National Park in Cameroon.
Rising to heights of 900 m the Mbe Mountains cover an area of roughly 85 km², with the gorillas concentrated in a central area of some 25-30 km² of ridges and valleys. The Wildlife Conservation Society (WCS) has supported conservation in the Mbe Mountains since 2001; this focused initially on gorilla surveys and expanded later to include support for community-based conservation and a schools-based conservation education program. In 2005 WCS recruited a small team of 9 eco-guards from surrounding villages to help protect the area. By reinforcing existing community rules and regulations regarding wildlife management on the mountain, their presence acts to deter poaching. The team were initially based at two temporary camps high up on the slopes of the mountain, and patrol the mountain on a daily basis, collecting data on gorilla nest sites and feeding trails. In 2006 Berggorilla & Regenwald Direkthilfe provided funds for the construction of a permanent base camp that provided a more secure and comfortable base for the protection and monitoring work by the eco-guards. In 2008 Berggorilla & Regenwald Direkthilfe provided funds for a second camp and construction work is expected to start soon.

One of only three Cross River gorilla sites in Nigeria, the Mbe Mountains lack formal conservation status. For many years the communities that surround the mountain resisted all attempts to have their land annexed as part of Cross River National Park. In 2006 the 9 communities met and created the Conservation Association of the Mbe Mountains (CAMM) with the intention of establishing a community-managed wildlife sanctuary for the purposes of conservation and local development. With support from WCS and others a General Assembly, Board of Trustees and Management Committee were duly created. WCS also assisted CAMM with the provisional boundary demarcation of a core conservation area, and help manage a Technical and Stakeholders Supervisory Group that exists to provide support and advice to CAMM. Funding for permanent boundary demarcation has recently been provided by Kolmården Zoo and work is expected to start soon.
Funding to support the 9 eco-guards is currently provided by the Great Ape Trust of Iowa, the Margot Marsh Biodiversity Foundation and the Quadra Foundation. From the two base camps a series of regular anti-poaching patrols is organized by small teams of 2 to 3 eco-guards. Each eco-guard spends two periods of 10 days on the mountain each month, separated by a rest period of 10 days. Any hunters apprehended on the mountain are reported to their village chief and to the General Assembly of CAMM, and any weapon they are carrying is confiscated and kept under the jurisdiction of CAMM.
Although hunting has been successfully controlled during the July/August period (a peak farming season), it traditionally starts to increase from September rising significantly around Christmas when hunters look to generate cash to support the festival and also to provide meat for consumption. In an effort to counteract this growing pressure additional eco-guards are recruited over the Christmas period each year to boost the anti-poaching efforts. In December 2007 5 teams, including the 9 WCS eco-guards and the 9 casual staff, were deployed on the mountain.

Signs of hunting observed per month, 2007
Results from Christmas anti-poaching patrols over the past 3 years showed high levels of poaching, and although the frequency of gunshots has declined the use of wire snares has increased. Levels of community support re-main high, and out of 5 poachers apprehended 3 were immediately fined by their respective communities. The fines ranged from N 5,000 and one crate of beer to N 10,000 and 2 crates of beer. This is the equivalent of some US$ 60-120, a sizeable amount within the local context.