Conservation in the Crisis Region of Cameroon 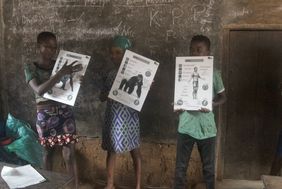 This year, the Norwegian Refugee Council placed Cameroon in the top spot for the world's forgotten crises. The conservation of the Cross River gorillas is shrouded in even deeper darkness, hidden from the public eye.

Cameroon's unrest started in the autumn of 2016. The English-speaking west of the country is poorer than the French-speaking region. The roads are an example of this: despite many promises from the government, even important roads have not been built, and existing roads have not been maintained and are frequently impassable. But anyone using the ailing roads still needs to pay the usual toll to the State. Cameroon is bilingual: all children learn English and French at school. In the churches too, the ministers alternate between languages when delivering their sermons.

English as an official language has been compromised by the fact that the French speaking courts in the capital translated legal claims made in English 'incorrectly', which resulted in legal cases being lost. When the authorities began filling vacancies for English language teachers with French language teachers, the anglophone population had had enough and took to the streets.

The protests were largely peaceful, but the State reacted harshly. The region's internet was shut down and troops were sent in to end the protests by force. Spokespersons were arrested by government troops forcing their way into their homes. When it was rumoured that rape had been committed, the anglophone population responded with so-called 'ghost towns': the towns closed all markets and shops for a few days each week. Because the military depends on food from the local population, it is hoped that this strategy will drive out the soldiers who are perceived as occupation forces. This protest was also peaceful.

However, this polarisation reactivated the separatist movement that had been believed to be dead - this movement wants an independent, anglophone 'Ambazonia'. The reader should be aware that Cameroon was founded on 1 January, 1960, with the north of the British mandate territory voting for a connection to Nigeria and the south voting for a connection with French Cameroon. Separatists still consider the vote of the south as having been rigged, but this was never investigated and clarified. The result was a bloody 20-year long dictatorship under President Ahidjo, who was advised in his style of government by French extremists.

His successor, President Biya, has been ruling the country with authoritarian anti-terror laws since 1982. Instead of trying to heal the country's festering wounds, Biya has only deepened the divisions during his almost 40 years in office, culminating in the separatists again declaring independence on 1 October 2017. It is not clear how much support the movement has in the population. Meanwhile, the conflict has claimed more than 3,000 lives and caused 679,400 people in Cameroon's Northwest and Southwest regions to flee their homes and settle elsewhere in Cameroon. Bedwin Ngwasina is one of these internally displaced people. She tells us that everyone she meets now knows someone who was injured or killed in the war.

Ms Ngwasina heads the African species conservation organization AWP. It is committed to protecting the Cross River gorillas, which occur in the anglophone part of Cameroon, e.g. in the Takamanda National Park. However, the dense forests are also a refuge for the rebels, which is why the area has been declared a combat zone. WCS and WWF pulled their staff out of this area as early as 2018. Park Director Egbe, working under the Ministry of the Environment MINFOF, stayed. I was there when he began receiving an increasing number of death threats from the separatists. Egbe could no longer use his office and had to change his phones and his routines almost on a daily basis. The Ministry replaced him in 2020.

Even reaching the vicinity of the park is not easy for a small conservation organization. For example, the road between Bafoussam and Bamenda can only be used at certain times and with an armed escort. The Cameroonian AWP is the only conservation organization that has continued its projects in the area during 2019/20. Doing this means not only putting themselves in danger but also performing a political balancing act. The organisation must comply with the requirements of the Ministry of the Environment, and also meet the conditions of the rebels who are in control of the target area.

The new Park Manager, Nbi, takes great care to follow the protocols. This means that any exchange of information requires a personal invitation, and that the travel costs and fees of the invited experts are accounted for, which may quickly amount to many hundreds of euros. Every NGO entering Takamanda must also pay for someone from MINFOF to accompany them. In terms of implementation, this is not only cumbersome and expensive, but also extremely dangerous. When AWP Cameroon arrived in Takamanda with a MINFOF ranger in October 2020, the population in Nfakwe suspected that this person was a government spy and scuffles broke out. Thankfully, Ms Ngwasina was able to negotiate between the rebels and the State and saved the ranger's life. The supposed protector of the NGO had to flee.

You would think that MINFOF would be happy about the NGO's commitment, but the park manager is in a dilemma: his own contacts in Nfakwe tell him that the anglophone population accepts his measures, but he has never entered the area himself and is therefore unable to say which message he should believe. And which truth would be to the taste of his superiors in the military?

The protection of the Cross River gorillas in Cameroon is currently in the hands of a few people. The support of the local anglophone residents is therefore indispensable - and this is only possible if people can look each other in the eye and trust each other. But trust is a rare commodity in times of crisis.

After her visit to Takamanda, Ms Ngwasina was glad that no one had reported any gorilla deaths. Nevertheless, hunting in the forest has become more intensive. Illegal deforestation is also increasing. She hopes for better dialogue and a less complicated exchange of information between all those involved on the ground. She wants a long-term commitment in the region, not just the initiation of some short-term measures which the population has to implement without support. Above all, however, she wants peace for her people.

Together with AWP Cameroon, Berggorilla & Regenwald Direkthilfe is working to support the Cross River gorillas. We provide technical and financial support to two of Ms Ngwasina's projects.

The mobile classroom - environmental education where it is urgently needed. Ms Ngwasina trains local teachers in species conservation and the use of modern teaching methods. With a mobile classroom, these courageous educators then travel to the people who live adjacent to the gorillas in remote species-rich hotspots. They teach local school children aged 7-18 years in order to facilitate a peaceful relationship between humans and gorillas. The project supports individual children, strengthening their motor, social, cognitive and language skills.

In 2017, the project was recognised by the Ministry of Education of Cameroon (MINEDAD) and developed jointly with German experts, WWF and WCS (Wildlife Conservation Society). Today, the project is more important than ever as children have been suffering from a school lockdown for the past 3 years. Some mothers have fled to UNHCR refugee camps in Nigeria so that their children can attend school there.

The Takamanda cocoa project - helping people and gorillas to survive. Gorilla conservation is not feasible without the support of local residents. But how can you help the gorillas, if you can hardly get by yourself? The people in Takamanda are at risk of extreme poverty. Some are refugees who have returned to rebuild their homes. The cultivation of cocoa has been their livelihood for generations.

Ms Ngwasina supports farmers in the optimization of cocoa cultivation, using environmentally friendly techniques to obtain higher yields. Simple methods, such as a solar dryer, can be used to mitigate problems like crop failures. Agricultural experts advise farmers on how to raise seedlings, and cocoa experts help them to understand the entire cocoa value chain. The project aims to ensure that small farmers don't go more into debt and that their cocoa gets a higher market price, helping them to overcome poverty - a clear message to residents that their commitment to the protection of gorillas also brings economic benefits.

The project was recommended by WCS and GIZ (German institution for international cooperation) in the regional action plan for the Cross River gorillas.