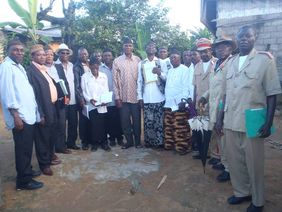 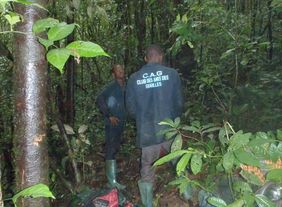 The Ebo forest in Littoral Region, Cameroon harbours a rich biodiversity of primates, including gorillas and chimpanzees. The government of Cameroon launched the gazettement of the Ebo forest into a national park in 2006. However, the decree creating the park is still awaited and there is little or no wildlife law enforcement on the ground (Morgan et al. 2011). The proximity of Ebo to major urban centres like Douala, Edea and Yaoundé is a major incentive to the hunting and bushmeat trade, especially as growing agricultural products is not commercially viable given the poor state of the roads around the forest. The forest is thus a main source of livelihood to adjacent communities that depend on unsustainable hunting and the bushmeat trade for protein and income (Morgan 2004). In addition to running two biological research stations in the west and east of the forest, the Ebo Forest Research Project (EFRP) has been working with local communities, traditional and administrative authorities around the forest to conserve its rich biodiversity and habitats while waiting for the official protection of the forest (Abwe and Morgan 2012). This article is aimed at providing a summary of the community-led conservation initiatives by traditional authorities and communities around the Ebo forest since 2012.

Community conservation outreach around the Ebo forest targets traditional authorities who play an important role in maintaining the cultural, political, social and economic integrity of their communities. They are also recognised as auxiliaries of the administration and thus could play a major role in communicating and lobbying with elites (influential community expatriates) as well as government authorities on issues relating to their communities. Each community member has a stake in the management of resources around them, and their involvement in biodiversity conservation can lead to positive behaviours toward threatened species in particular and biodiversity in general. The "Club des Amis des Gorilles" initiative aims to encourage local communities around the gorilla habitat to be directly involved in monitoring for gorilla signs and threats in the forest around their villages, as well as raising awareness about the significance of gorillas and other species within and outside their communities.

Since 2011, the traditional authorities of villages adjacent to the Ebo forest have been meeting regularly to adopt strategies to conserve the biodiversity of this forest (Abwe and Morgan 2012). During the second general assembly meeting in June 2013 held at the Limbe Wildlife Centre, the chiefs sought, among other things to: 1) create an official "association" of traditional authorities around the forest with the goal of conserving the biodiversity of the Ebo forest and promoting alternative sustainable livelihoods in their communities, and 2) continue lobbying the government of Cameroon until the degree creating the Ebo National Park is signed.

During the Limbe 2013 Ebo traditional authorities’ meeting, the "Association des Chef Traditionnels Riverains de la Forêt d'Ebo" (ACTRIFE) was created. The chiefs drafted a constitution for the association and applied for the official recognition of the association by the government. The association was finally legalised by the Senior Divisional Officer of the Nkam Division in 2014. The association is headed by His Royal Majesty Dipita Gaston and a bureau of 9 members. The bureau meets quarterly to coordinate the activities of the association, liaise with the EFRP, local administrators, elites and government officials about the threats to the biodiversity of Ebo and the creation of the Ebo National Park, while the general assembly meets annually. Since 2013, the association's executive has had audiences with the Minister of Forestry and Wildlife (MINFOF), the Secretary General at the Prime Minister's office, as well as the Secretary General at the Presidency of the Republic for the question of the Ebo National Park creation. More meetings with high level government officials are planned in the months ahead.

Given that the government's premise for delaying the creation of the park was on grounds of petitions against the park by elites who hail from ancient villages within the forest (abandoned during the civil strife surrounding the independence of Cameroon in the early 1960s), the administrator of Yingui Sub Division Michael Nkenemo Atteh with the support of HRM Dipita Gaston organised a meeting for elites from the area on May 19th 2014. This meeting, attended by almost 150 elites, culminated in a petition to the government supporting the creation of the park and was signed by 147 participants. The petition was forwarded to the government by the administrator, Michael N. Atteh.

Following consultations with the three local communities closest to the Ebo gorilla habitat in the north east of the Ebo forest, a participatory approach to gorilla monitoring and conservation was adopted in 2012 (Abwe and Morgan 2012). This led to the creation of Club des Amis des Gorilles (CAG) in Iboti, Locndeng and Locnanga. The goal of the CAG clubs is to conserve gorillas of Ebo forest and their habitats as well as other species therein. The main objectives of the clubs are to: 1) monitor gorillas and threats towards them within their habitat in order to record the human impact on this fragile population, 2) promote positive behaviours towards gorillas, chimpanzees and other wildlife through sensitisation and conservation education within and outside communities, and 3) promote small-scale, sustainable livelihood activities in communities in order to reduce reliance on the forest.

Membership and inauguration: Membership into the clubs is voluntary and open to all community members without any social, political or religious discrimination. Potential members have to sign an adherence/commitment form that attests the uniqueness of Ebo gorillas, chimpanzees, drills and other species of the forest and the need for members to protect them and their habitats for posterity. The clubs in Iboti and Locndeng were launched on August 1st 2012 by the Divisional Officer (DO) of Yingui Sub Division (Jean Marc Doumbe) in the presence of HRM Dipita Gaston. The Iboti and Locndeng clubs were launched with 34 and 47 members respectively. The club in Locnanga, which currently has more than 50 members, was launched December 13th 2013 by the new DO of Yingui, Michael Nkenemo in the presence of elites of the village who are now based in Douala.

To date, the membership of the three clubs exceeds 200 active members. Each new member receives a badge which is used for voting during CAG annual general assembly meetings. Each club has an executive made up of a president, vice president, secretary, treasurer, financial secretary and monitoring coordinator. The term of the executive bureau is 2 years, renewable once. Second elections for the Iboti and Locndeng CAG bureaus were held in August 2014. The three clubs have been recognised and legalised as associations by the Senior Divisional Officer of the Nkam Division, in the Littoral Region. In addition to scheduled quarterly meetings, the executive committee meets with monitoring teams after each gorilla monitoring trip to discuss the state of gorillas in the forest as well as threats posed by human activities.

Gorilla monitoring: From their inception to December 2014, the CAG clubs in Iboti and Locndeng have organized over 28 monitoring trips within the gorilla habitat. Between August 2012 and December 2014, 191 individual gorilla nests in 47 groups were recorded. From gorilla nests, trails and feeding sites the monitoring teams recorded and collected 17 gorilla feces for dietary and genetic analyses. Eighty two individual chimpanzee nests in 39 groups were also recorded during the same period. Several chimpanzee termite fishing tools were also observed and collected in the area. During this period, drills and several species of guenons were observed. Hunting signs were observed within the area including hunters, their camps, wire snares, gunshots, discarded cartridge shells, etc. All observations are geo-referenced using the GPS with the goal of producing a map that would depict the gorilla range and thus provide the basis of the proposed "no-go zone" in the gorilla territory. After each monitoring trip, the teams have a briefing with the CAG executive and traditional authorities to report their findings. Recalcitrant hunters are advised and sometimes reported to the administration and MINFOF for appropriate action. The club in Locnanga is engaged in sensitisation within their community as well as surveillance to stem hunting in and around the gorilla habitat by local and immigrant hunters. They intercepted a notorious hunter from a neighbouring community in early 2014.

CAG sensitisation:The CAG clubs are engaged in conservation education and sensitisation activities within and outside their respective villages. Conservation education messages in storytelling, songs, on T-shirts, posters, parades, presentations, banners and billboards are widely used. Storytelling sessions where elders tell heroic animal stories to youths and school children are organised regularly in Iboti and Locndeng. During National Youth Day celebrations (February 11th), the CAG organises parades and sensitisations in their respective villages. School pupils are engaged in activities that range from drawings, paintings, poems and songs, with the best pupils rewarded with prizes. During the summer holidays (July-August) the clubs organize inter-village football competitions with adjacent villages to engage the youths and spread the gorilla message through the "Coupe de Gorille" (Gorilla Cup).

The promotion of sustainable alternative livelihood activities is a major objective of CAG clubs to reduce reliance on hunting and bushmeat trade for protein and income. With the support of EFRP, high yielding cocoa bean nursery projects have been carried out in Iboti, Locndeng and Locnanga. The seedlings from the nurseries have been transplanted into CAG and other community members’ individual farms. The clubs in Iboti and Locndeng as well as the adjacent community of Mosse have been engaged in vegetable gardening to improve the diet and resource base of the local population. Women in the communities engage in the gardening of cabbages, carrots, beans, pepper, huckleberry, okra, etc. Tubers, bananas and plantains are the typical food crops in these communities and this diversification is hoped to improve on local diets and living standards from non-animal protein sources. A poultry project was initiated in the Mosse community in 2014 with more than 300 fowls produced. Unfortunately, due to low demand within the community (population of less than 50 individuals), marketing the fowls was a challenge given the long distances to neighbouring populations and the poor state of roads.

In 2013, the EFRP launched a project to produce a Handbook for Ebo gorillas that will help CAG clubs understand the ecology of the gorillas as well as have a broader perspective on gorillas and their conservation status across Africa. Written in straightforward language, and with the local state-of-knowledge firmly in mind, the final chapter is devoted to Ebo gorillas, and the role of CAG to conserve them. Thanks to funds from Zoo Basel via Berggorilla & Regenwald Direkthilfe, 3000 copies of this handbook were printed in May 2014. The handbook was launched in Iboti and Locndeng villages by HRM Dipita Gaston who wrote the foreword. Copies of the books were distributed at no cost to CAG and other community members, schools and the administration around Ebo forest. Copies were also distributed to government services and NGOs in the Nkam Division, Littoral Region as well as in Yaoundé.

The Ebo Forest Research Project works in conjunction with the Government of Cameroon (MINFOF and MINRESI) and with WCS. This work is possible due to support from the Zoological Society of San Diego, the Offield Family Foundation, USFWS Great Ape Conservation Fund, the Arcus Foundation and the Margot Marsh Biodiversity Foundation, to whom we are extremely grateful. We also thank Berggorilla & Regenwald Direkthilfe and the Basel Zoo for supporting the production of our Gorilla Handbooks.