Communities Get Involved in Gorilla Protection 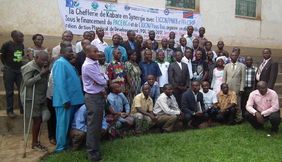 Group of the stakeholders during a workshop (© Radar Birhashirwa Nishuli)

The conservation of our gorillas can only be safeguarded through good governance, involving all stakeholders among the local communities resident in the Kahuzi-Biega National Park. In order to ensure the involvement of the stakeholders in governance, the park has just completed the establishment of a Community Conservation Management Council (CGCC) at the chiefdom level. This is a key milestone, arguably even more important than the establishment of the Community Conservation Committees (CCCs) at groupement level in 2000.

The CGCC forms the technical group that embodies the chiefdom's (chefferie) support for the development and sustainable management of the ecosystems of the park and its surrounding areas. The chiefdom may be regarded as the epicentre for the coordination of support to the park, which gives the CGCC an important role in deciding how inhabitants from the different localities could benefit: either through support for social infrastructure (schools, health centres, water distribution systems, agricultural access roads, reforestation, etc.), or through support for income-generating activities. Appropriate interventions will be proposed by the CGCC in its local development plan.

On 15 March 2013, a Deed of Commitment was signed by the following stakeholders:

The meeting to sign the commitment was held just before the Democratic Republic of the Congo initiated its decentralisation policy. The meeting had two important outputs: the Deed of Commitment itself and an associated byelaw.

In his speech, the Mwami Kabare Rugemaninzi II N’abushi confirmed that:

"The Kahuzi-Biega National Park is one of the treasures of the Province of South Kivu. We are proud of the park, which attracts many tourists, thanks to its biodiversity, and particularly the population of eastern lowland gorillas. We also recognise the important contribution of the park in the battle against global warming, which places humanity at risk from greenhouse gases.

The park is therefore a heritage that every single one of us needs to protect, for the sake of our own survival and that of future generations. The process that we are setting in motion today aims to transform our population into experienced defenders of the park."

The Community Conservation Management Council of Kabare chiefdom will comprise a total of 23 elected members from different social and professional groups plus 7 co-opted members, totalling 30 members in all. The next stage is to commence support for the park within the framework of the local development plan established by this decentralised entity. A socio-economic study has been conducted in the 14 groupements of the chiefdom to facilitate the operationalization of the plan.