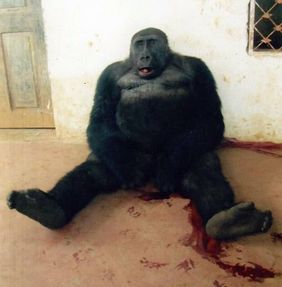 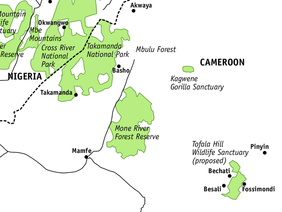 On March 1, 2013, the Cameroon conservation community was taken aback when news reached them about the brutal killing of a silverback male of the critically endangered Cross River gorilla in Cameroon. This human cousin, which had probably strayed from the proposed Tofala Hill Wildlife Sanctuary in the Lebialem Highlands, was killed by the people of Pinyin, a village in the Santa Sub-division, Northwest Cameroon. Gorillas were first reported here some 60 years ago, making it likely that the current young generation has not seen gorillas or chimpanzees during all that time.

Judith Benue, a local teacher from the village school, spotted a male gorilla approaching her in the farm on March 1, 2013. She screamed at the top of her voice and rushed back to the village to raise an alarm. A small population from the village armed with guns, clubs and stones, under the command of a Gendarmerie officer and the village chief, searched for the gorilla and killed it 3-4 km away from where it was initially spotted, in the name of "self-defense". Frightened by the noise, the silverback had taken to its heels and was probably heading back towards its habitat. Unfortunately for the gorilla, the crowd caught up with him and fired about 47 cartridges, together with stones, and beat it with clubs, leaving the poor animal in a pool of its own blood.

Speaking on March 21 at a press conference in Buea, the President/CEO of ERuDeF, Louis Nkembi, said the killing of the gorilla was a bad omen for the conservation world, given that it indicated that the fight against poaching, ignorance and people who do not yet understand the value of wildlife is still very far from being achieved. The proposed Tofala Hill Wildlife Sanctuary, from which the slain Cross River gorilla had probably come, hosts about 40 of these gorillas (ERuDeF estimate). The death of this gorilla therefore means the sub-population has decreased by one; the loss of just one gorilla means a lot to the Cross River gorilla population that numbers just about 300 in the wild. The Lebialem Highlands lodges over 60 of these 300 gorillas within the Cross River gorilla landscape (ERuDeF estimate).

On March 28 Louis Nkembi, in collaboration with Mbah Grace, the Northwest Regional Delegate of Forestry and Wildlife, jointly launched an education and sensitization campaign in the community where the gorilla was killed, aimed at the local, traditional and administrative authorities. Mbah Grace explained to the Fon and his people the legal implications of the killing of the silverback gorilla as it falls within category A of protected animal species alongside chimpanzees and others. Thus, anybody who kills them is liable to a jail term of 1–3 years or a fine of 3 million francs CFA and above, according to the laws of the nation. The importance of wildlife and biodiversity conservation was also explained.

From all the investigation conducted, it was evident that the gorilla was killed out of excitement on the part of the Pinyin people and not self-defense as it was reported earlier. The death of this Cross River gorilla further underpins the need for more concerted efforts to protect these great apes in all the locations where they are still found. There is equally a need for more sensitization campaigns, especially in forest adjacent communities, on the need to conserve these animals. The time for the government of Cameroon, supporters, conservationists and NGOs to act is NOW! If not, we might as well say good bye to the remaining precious apes.