Approaches to Saving Gorillas in Nigeria 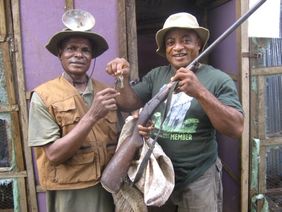 WCS education coordinator, Mark Otu (right), hands over the keys of a snail pen to one of the project beneficiaries, John Kidze, as he receives hunting gear from him (© WCS)

Cross River gorillas face diverse threats resulting from high human population densities around the areas they inhabit. Efforts to save these gorillas must therefore take into account the needs of the people who live next to the gorillas. The WCS Nigeria program has developed and implemented a number of community conservation education and alternative livelihood projects.

Exchanging Guns for Snails and Beehives

Hunting is one of the main threats to the gorillas and other wildlife found within Afi Mountain Wildlife Sanctuary, the Mbe Mountains Community Wildlife Sanctuary and Cross River National Park. Hunting of wildlife is carried out by local community members for consumption and for sale to raise cash to meet their economic needs. Hunting increases during local festival periods and the Christmas and New Year celebrations. WCS believes that one of the ways to curb the threat of hunting in the area is to enhance livelihoods of community members, especially those who actively hunt and therefore directly pose the threat. The aim of the project is to reduce levels of hunting through provision of alternative livelihood activities such as snail farming and beekeeping for identified active hunters. Working with local chiefs and community leaders we identified the active hunters in each community who posed the greatest threat. As a condition each beneficiary had to demonstrate his willingness to abandon hunting and to relinquish their hunting gear (shotgun, lamp/flashlight, and cutlass) to their respective village heads or guarantors who subsequently handed over the items to WCS. The project has enjoyed wide acceptance at all sites. A total of 12 snail pens and 135 beehives have been constructed and stocked, benefiting 39 hunters from 30 different communities.

A weekly radio programme entitled "people and conservation" has been developed by WCS to convey conservation messages to local communities at Cross River gorilla sites in Nigeria with the aim of changing attitudes toward the use of natural resources. The programme typically features discussions by a panel which includes community leaders (often village chiefs), hunters, park officers, nature enthusiasts and conservationists. The participants, who are also members of the target communities, educate the target audience in the local Boki language. So far, the programme has aired 48 times on the local CRBC FM radio station. The target audience includes hunters, farmers, fishermen, loggers, students and NTFP collectors. It is estimated that the programme has a weekly audience of around 10,000 people in 74 communities. Topics aired on the programme so far have included discussions of forest laws and decrees, sustainable use of natural resources, local attitudes to conservation, crop raiding, river poisoning as a fishing method, the hunting and trading of endangered wildlife, and community conservation within the Mbe Mountains.

Better Law Enforcement through the Training of Eco-guards

To improve protection of the gorillas living in the Mbe Mountains WCS recently organized training for 12 eco-guards who carry out daily patrols to monitor and protect the gorillas and their habitat from illegal activities. Over a period of 10 days from 5th to 15th of May 2010 the Mbe eco-guards received training in anti-poaching techniques focusing on patrol planning and coordination, ambush techniques, arrest, physical fitness, discipline, community relations and conservation education skills. Refresher training in the use of handheld CyberTracker units to collect data was also conducted during the period. The training was conducted to equip the guards with the necessary skills to carry out their protection duties effectively.
Equipped with skills acquired during the training, and with raised morale, the eco-guards are now able to conduct more effective patrols. Since the training 8 poachers have been arrested and handed over to the Conservation Association of the Mbe Mountains, the community conservation association which manages the Mbe Mountains in accordance with existing community bylaws. Three of the poachers have already been fined. Seven hunting camps have also been destroyed and 167 wire snares removed.