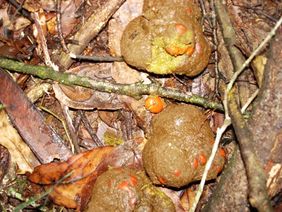 Though restoring forest is not a substitute to preserve intact forest, for sites where large parts of the forest have already been cleared, restoring degraded areas can help to re-establish both ecosystem services and biodiversity (Holl 2013). Interest in restoring tropical forest has grown substantially in the past few years with increasing efforts to reduce anthropogenic carbon emissions caused by deforestation and forest degradation, as well as increase carbon stocks by restoring and better managing forests (Elias & Lininger 2010).

Most reforestation in the tropics utilized exotic tree genera (e.g. pine, eucalyptus), but in the past decade or two there has been extensive research on both screening and developing propagation methods for native species suitable for inclusion in restoration efforts (Holl 2013).

Fruits, including fleshy fruits and nuts, are consumed by a wide range of animals, including birds and mammals which are the principal seed dispersers of fleshy-fruited plant species in forest ecosystems (Hickey et al. 1999; Wilson 1993). Seed dispersal by animals is the primary dispersal mechanism for tropical trees (Holl 2013), but most seed-dispersing animals are unlikely to move from forest into open agricultural lands. It is believed that some fruit species may have their germinating capacity boosted after transiting through an animal's gut (e.g. Fedriani & Delibes 2009).

In tropical African forests where they live, great apes (gorillas and chimpanzees) consume a lot of fleshy fruits, swallowing them without cracking their seeds, which they disperse within their home ranges, thus contributing to the maintenance of plant species diversity. We have been conducting research on great apes in Kahuzi over more than two decades, collecting their dung to describe their frugivorous diet. A large amount of intact seeds of fleshy fruits are found in their faeces.

Very few if any remnant natural forests still exist around Kahuzi-Biega National Park and it is therefore very difficult to find seeds of native plant species outside the park.

Around Kahuzi, all the native forests have been completely cleared, and people in need of fire wood, timber and medicines are entering into the park to collect these resources threatening the protected wildlife including the endangered great ape species. Entering the park for seed collection from fruiting trees is not allowed, to avoid disturbance of park biodiversity.

Planting native tree seedlings is the most common strategy for restoring tropical forests. Several other approaches to restoration have been tested in scientific experiments, but these approaches rarely have been applied at a larger scale and have met with mixed success (Holl 2013). Using intact seeds found in gorilla and chimpanzee faeces may be applied as a cost effective and non-invasive strategy to restore native forested habitats outside the apes' range.

These preliminary results will be combined with expected results from a more systematic study using seeds from several tree species in a number of replicates to get a good average of germinating rates of different tested seeds. The overall aim of this study is to assess the effectiveness of a non-invasive approach to restore degraded and fragmented natural forested habitats using intact mature seeds found in ape dung.

We expect the results of the study to determine the dispersal effectiveness and, thus, the contribution of Kahuzi apes to the forest processes - and later we want to use successful fruit species with good germination rate and fast growing native species in a large-scale reforestation program around Kahuzi-Biega National Park.

The tree species from gorilla dung included in the study

* Preliminary results do not take into account the differentiation between the two apes and the age of tested seeds. Figures in brackets are the numbers of seeds which successfully germinated.