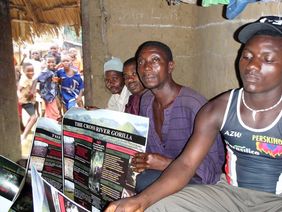 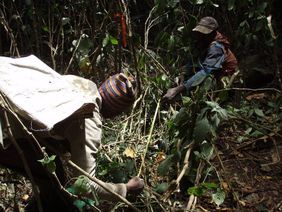 A new community-based approach to the conservation of some of the most remote (and hence least protected) groups of Cross River gorillas is currently underway in Cameroon. "Gorilla guardians" are in the process of being selected from the local population in villages close to target gorilla sites, with the overall goal being to strengthen monitoring, awareness, and protection of Cross River gorillas and other endangered species, through an approach that encourages greater community participation in conservation. In particular, the creation of these gorilla guardians provides another step towards the general sensitisation of the local people living in the Takamanda-Mone Landscape, as many of the villages earmarked to be involved in this initiative fall outside the range of current WCS-led conservation education activities.

Six villages have been selected initially to participate, two from each of the three remote gorilla sites - the Mowambi Hills, the Mbulu Forest and northern Mone - that we are targeting for improved conservation action. An estimated 60 or so gorillas are thought to be present in these sites, representing perhaps as many as 50% of all remaining Cross River gorillas in Cameroon (the total estimated number of Cross River gorillas in Nigeria and Cameroon is thought to be between 200 and 295 individuals; Oates et al. 2007). These gorillas are the most vulnerable, as they inhabit forests with little or no legal protection and where hunting pressure is particularly high. The gorilla guardian villages have traditional ownership over the forest areas where the gorillas occur, and their traditional councils have participated in the selection of the gorilla guardians, providing a strong sense of community involvement from the beginning. Due to the remote nature of these sites, survey work and ongoing gorilla monitoring in these forests has historically been limited, another good argument for involving local communities who live on the gorillas' doorstep.
The gorilla guardian approach aims to promote the conservation of these gorillas in three important ways. First, the appointed guardians will act as a direct link between conservation authorities and their sites, reporting any confirmed incidence of gorilla (and chimpanzee) hunting to government officials and WCS quickly. This will help strengthen the application of wildlife laws. Second, gorilla guardians will gather information concerning the location of gorilla nests from forest users within their community (particularly from hunters). This information will be recorded on a community-produced forest map. Research staff from WCS and the government will visit each village 2-3 times a year, to conduct surveys, visiting recorded nest sites in conjunction with the gorilla guardians. Given typical nest decay rates in the area, it should be possible for monitoring teams to visit most recorded nest sites on these regular visits. The use of this a priori knowledge should increase the effectiveness of such ongoing monitoring, as nest site searches will be directed rather than random, increasing the yield of baseline data and giving us a better idea of how gorillas disperse in various forest areas over time. Lastly, gorilla guardians will play an important role in building awareness amongst their communities of a range of topical conservation issues, as an extension of present conservation education programmes implemented by WCS across the Cross River gorilla landscape.
Potential gorilla guardians, selected from an interview process held in their villages, were invited to the research station in the Kagwene Gorilla Sanctuary for a 2-week training course/final selection starting at the beginning of November. There they worked with permanent research staff and government representatives to learn first-hand gorilla monitoring techniques and other skills that they will need to perform their role back in their own communities effectively.
We are doing our best to minimise the expectations of local communities through this scheme, while at the same time encouraging them through their gorilla guardians to adopt a more community led approach to the conservation of Cross River gorillas and other endangered species. We very much hope that over time the gorilla guardian system might evolve into a realistic alternative to what local communities often perceive as a more top-down protected area approach typical of parks, wildlife sanctuaries and the like.
It will also be interesting to evaluate to what extent this scheme will be successful in the absence of some kind of additional community level benefits, especially as the goal for conservationists is not only to improve the survival prospects for Cross River gorillas in specific sites such as those targeted here, but also to maintain functional habitat connectivity across the landscape.

Acknowledgement
We would like to express our particular thanks to both the US Fish and Wildlife Service and the Margot Marsh Biodiversity Foundation for providing initial support to launch the gorilla guardian approach, and we look forward to keeping you informed of progress and lessons learned in due course.