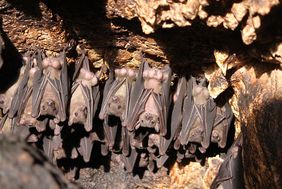 Fruit bats in a cave in Uganda (© Wolfram Rietschel)

Zoonoses are infectious diseases that can be transmitted between animals and humans. Among viruses alone, there are more than 1,000 human pathogens, of which about 60 % are zoonotic. Because humans and non-human primates are so closely related, in terms of genetics, almost all human infections can be transmitted to apes - and vice versa.

A distinction is made between:

The number of known zoonoses is probably in the four-digit range; in this article, only a few selected diseases will be discussed.

In recent years, epidemics and pandemics caused by corona viruses have been particularly topical. Until 2003, these viruses, which cause a range of symptoms in humans, mammals and birds, were not considered to be important zoonoses. Since then, three emerging (newly developed) corona viruses have caused panic worldwide - and are still doing so. A virus is called 'emerging' whenit appears for the first time in a population of organisms, or when it spreads in the population unusually fast and with a high incidence (frequency). This can occur when a virus switches to a different host species and adapts to it, or when a new, more pathogenic virus variant develops in the current host species.

All three pathogens have genetic similarities with corona viruses found in bats. Bats and fruit bats are also considered a reservoir for rabies, Ebola and Marburg viruses. Since more than 3,000 different corona viruses have been found in bats, it is only a matter of time before the next pandemic erupts.

The scientific literature includes numerous references to viral zoonoses; it is assumed that almost all viruses detected in humans have their origin in non-human animals. About 100 years ago, the simian immunodeficiency virus, SIV, was transmitted from chimpanzees to people. It mutated into the human immunodeficiency virus, HIV, and caused the global AIDS pandemic. Thousands of years ago, African apes became infected with SIV through contact with other primate species (probably mangabeys). In the course of evolution, their immune system adapted to the pathogen such that the pathogenicity (disease-causing property) of SIV is minimal compared with that of HIV.

In African national parks, deaths have been observed in groups of habituated chimpanzees and gorillas after the animals were infected with 'banal' human cold viruses. Employees of research projects and tourists are among the possible sources of infection. Viruses may change their pathogenicity when they switch hosts, especially if the immune system of the recipient is not adapted to the pathogen. An example from zoological gardens is the transmission of Herpes simplex viruses. This pathogen is widespread in humans and apes in zoos: 80-90 % of adults carry antibodies to the virus. The infection usually progresses without or with only mild symptoms (cold sores). However, in new-borns and in tupaias, the virus may cause a severe general infection, which may prove fatal. The closely related herpes B viruses are endemic in Asian macaques and are usually asymptomatic. The viruses are transmitted by bites (saliva), scratches or through contact with faeces, urine or the contents of blisters. In humans, an untreated infection is fatal after only a few days in 80 % of cases.

M'Pungu, the first gorilla to survive transport to Europe, arrived in 1876 and died in Berlin in 1877 when he was about three years old. During the post-mortem, pathologist Rudolf Virchow from the Berlin Charité found that pulmonary tuberculosis was the cause of death, in addition to diarrhoea and intestinal inflammation. Tuberculosis (TBC) resulted from the close contact the young gorilla had had with humans. 'Consumption', as it was called then, was widespread in the 19th century, particularly among the poorer population. Sources of infection included people (transmission by coughing), fresh cow's milk and contact with diseased animals. According to the World Health Organization, one third of today's global population is infected with TB, although the disease manifests itself only rarely. Clinical symptoms may occur in stressful situations, for example in the case of malnutrition and a weakening of the immune system (e.g. in the case of AIDS), and the pathogens may then be excreted.

As recorded in Brehms Tierleben [Brehm's Animal Life], M'Pungu was fed a terrible diet of buttered bread, cow's cheese, Frankfurter sausages and Berliner Weisse, a sour beer. This probably contributed to the outbreak of the disease in the young gorilla. In his book Die Krankheiten der Affen [The Diseases of Monkeys and apes], published in 1870, the zoo veterinarian and zoo director Max Schmidt named tuberculosis as a common cause of death and attributed this to "a change in climate, imprisonment and abnormal diet". By comparative observations of capuchin monkeys and baboons, he was able to refute the idea that "constant excitement and resulting masturbation contribute to the development of tuberculosis", which was widespread in human medicine at the time.

In Africa, tuberculosis is one of the most prevalent infectious diseases, alongside malaria and AIDS. People who suffer from HIV are often also infected with TB.

African apes live in areas where tuberculosis is widespread in the population and among farm animals. It is entirely conceivable that the pathogens are transmitted to gorillas and chimpanzees by local residents and their animals, by paramilitary gangs, refugees, poachers and employees of conservation projects. So far, however, there is only one confirmed report of a Mycobacterium tuberculosis infection in a chimpanzee that was found dead in the Tai National Park in Ivory Coast.

In other parts of Africa, the TBC problem is much more serious. In South Africa, for example, 80 % of the lions tested in the southern Kruger National Park were found to be positive for TBC. The source of infection in this case was buffaloes who had been infected by contact with domestic cattle.

A distinction is made between endo- and ectoparasites, depending on whether they live inside or on the host. There are probably no wild animals without parasites. However, in most species a host-parasite balance has developed in the course of evolution. Parasites, especially intestinal nematodes such as roundworms, hookworms and pinworms, are also widespread among the rural human population in Africa. The balance can be disturbed in stressful situations, malnutrition, bacterial or viral diseases, if the immune system is weakened, in old age or if the host is infected with other parasite species. During the early days of keeping apes in zoos, intestinal parasites were a common cause of death, alongside tuberculosis and pathogenic intestinal bacteria.

The scientific literature gives individual reports of the mutual transmission of hookworms between gorillas, the local population and primate researchers. It is not without reason that, when you're trekking gorillas, you are only allowed to follow nature's call using an assigned place with a prepared hole, which is then carefully covered.

One oddity worth mentioning is that the first gorilla infants who arrived in Stuttgart Zoo in 1965 were covered in lice. Unfortunately, the species was not determined, but it was probably the gorilla louse, Pthirus gorillae. The human head louse (Pediculus humanus capitis) has not yet been found in wild gorillas, but it cannot be ruled out that the gorillas become infected with lice as a result of close contact with the staff members who looked after them. In an outbreak of Sarcoptes scabies (itch mite) in a mountain gorilla group in Bwindi National Park, it was suspected that the mites had been transmitted through direct or indirect contact with domestic animals or the local population.

As settlements and farmland inch closer and closer to the protected areas of East Africa, there is an increasing risk of the mutual transmission of pathogens. This can only be reduced by monitoring the park borders, setting up buffer zones and educating the population. There is an urgent need to improve the medical infrastructure and ban the marketing of wild animal meat (bushmeat).

Since September 2020, the generally applicable corona virus rules have also been in place for participants in gorilla and chimpanzee trekking: keep your distance (1.5 m between humans but 7-10 m between humans and gorillas, although this is not always observed by the gorillas!), observe hygiene and wear special masks (N95, surgical masks or double-layer cloth masks with filter). Until then, masks had not been mandatory for tourists in Bwindi and Kibale National Park in Uganda, nor in the Volcanoes National Park in Rwanda. It is questionable whether the apes appreciate this change: when tourists visited the Grauer's gorillas in the Kahuzi-Biega National Park in 2010 wearing masks for the first time, the 200 kg silverback Chimanuka was frightened and retreated to safety in the nearest tree. In 2016, however, the author was able to find out for himself that Chimanuka has become accustomed to the sight of masks.