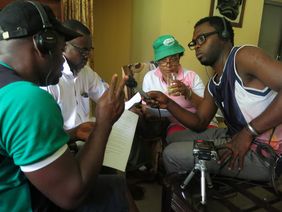 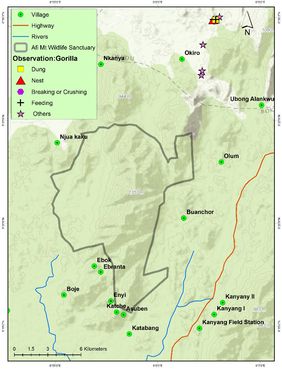 In November 2017, Wildlife Conservation Society (WCS) received a report of a lone male Cross River gorilla sighted near two Nigerian villages (Ofambe and Okiro), miles from the nearest protected area. Fewer than 300 Cross River gorillas remain in the wild in Nigeria and Cameroon and are rarely seen. They avoid humans by living on the steepest, most inaccessible mountain slopes.

Researchers believe the gorilla is a "blackback" - a young male that has recently left its family group to start its own. Gorillas normally live in small groups composed of a large dominant male known as a silverback together with three to four females and their young. When these young gorillas mature, they leave to join another gorilla group. Each blackback gorilla must roam the forest in search of a mate. These wanderings are very important for the long-term survival of the species, allowing for the exchange of genes between groups.

This gorilla is believed to have been making an attempt to migrate from the AMWS to the Mbe Mountains, the nearest Cross River gorilla site. So far away from the sanctuary (see figure next page) and without the protection offered by ranger patrols within the sanctuary, he faced serious risk of being killed by villagers for bushmeat or as reprisal for perceived threat to people and crops on farms. Fortunately however, rather than attacking and killing this young, adventurous gorilla, the villagers tolerated its presence so close to their communities and reported its presence to the Cross River State Forestry Commission (CRSFC), which manages the sanctuary, and WCS staff at Afi. In December 2017, WCS staff and CRSFC rangers found a fresh trail heading back into the sanctuary - the last sign of the animal seen outside the sanctuary and indication that it had safely returned back to the sanctuary. The attitude and behaviour of the villagers towards this gorilla is commendable, a possible indication of the success of WCS' long-standing education program.

Although protected by law in Nigeria and Cameroon, Cross River gorillas are still occasionally hunted and they are particularly vulnerable to hunting outside protected areas where they are not protected by ranger patrols. WCS works to save Cross River gorillas through support for protected area management and wildlife law enforcement, community-based gorilla protection, research, sustainable livelihood development and conservation education. WCS has been implementing an education and awareness program in the Cross River gorilla landscape since 2002, reaching over 100 villages and 80 schools in Nigeria and Cameroon. Activities implemented include community meetings, great ape film shows, field trips for conservation clubs, schools visits, and a radio program called My Gorilla - My Community. The My Gorilla - My Community program is a weekly radio magazine program that combines entertainment and education to influence attitude and behaviour change. The program includes a drama segment and an interview segment which provides a platform for listeners to interact with conservation experts and local politicians, and promotes adoption of sustainable livelihood activities that reduce pressure on the gorillas and the forest. Cross River gorilla campaign materials such as T-shirts, caps and notebooks are produced and distributed as souvenirs in the local communities and schools to encourage people to take pride in Cross River gorillas as their natural heritage. Thanks to this increased awareness, and two enlightened village chiefs in Ofambe (Chief Julius Ochui) and Okiro (Chief Augustine Bitte), the presence of this gorilla so close to their villages was tolerated.

However, more needs to be done to protect gorillas outside protected areas. With funding support from Berggorilla & Regenwald Direkthilfe, WCS recently launched a "Gorilla Guardian" project at Afi, working with the surrounding communities to monitor and protect Cross River gorillas outside the sanctuary. A similar project is implemented by WCS in Cameroon.