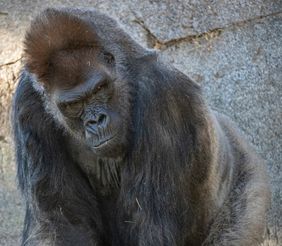 Several gorillas at the San Diego Zoo Safari Park have tested positive for SARS-CoV-2, the virus that causes COVID-19. On 6 January, two of the gorillas began coughing and faecal samples from them were tested through the California Animal Health and Food Safety Laboratory System. The U.S. Department of Agriculture’s (USDA) National Veterinary Services Laboratories (NVSL) confirmed the positive results. The gorillas were infected with the B.1.429 lineage of the coronavirus, which has been increasingly identified in California and may be more contagious than other strains.

It is suspected the gorillas acquired the infection from an asymptomatic staff member, despite following all recommended precautions including COVID-19 safety protocols from the Centers for Disease Control and Prevention (CDC) and San Diego County Public Health as well as wearing protective equipment when near the gorillas. This is the first known instance of natural transmission to great apes.

The eight-member group remained quarantined together and was under close observation. Some gorillas showed symptoms including mild coughing, congestion, nasal discharge and intermittent lethargy. The silverback Winston (49) showed more serious symptoms including cough and lethargy, and because of underlying medical conditions underwent a diagnostic examination under anaesthesia. Veterinarians confirmed pneumonia and heart disease. Following consultation with specialists, treatment was initiated, including heart medications, antibiotics and monoclonal antibody (antibodies made by cloning unique white blood cells) therapy. The monoclonal antibody therapy originated from a supply that was not permitted for human use. The veterinary team who treated Winston believe the antibodies may have contributed to his ability to overcome the virus.

The network of collaborators has also provided San Diego Zoo Global veterinarians with a limited supply of a recombinant purified spike protein vaccine, intended for use in protecting animals against SARS-CoV-2. The vaccine doses originated from a supply strictly intended for nonhuman use. In the meantime, orang-utans and bonobos received their vaccination at the San Diego Zoo.

San Diego Zoo Safari Park re-opened for the public on 13 February, 2021, making it possible to see the gorillas again who had fully recovered. This was possible thanks to the incredible work of wildlife care professionals, the veterinary team and collaborations with a wide array of colleagues and partners who ensured that the highest standard of care was given to the affected gorillas.

On 25 February, another gorilla was tested with positive results for COVID-19 in a faecal sample: the silverback Richard in Prague Zoo. For the other gorillas, results were negative. As some of the keepers’ tests were also positive, it is assumed that the virus was transferred to the gorilla by them.

Richard’s symptoms were mild: loss of appetite and fatigue. To avoid extreme stress, he was not separated from the rest of the group. During the following days, the females Shinda and Kijivu also tested positive; one of them had no symptoms at all whilst in the other they were very mild. After a week, Richard’s condition had improved considerably. Apart from the gorillas, two lions and some other cats were also SARS-CoV-2 positive.