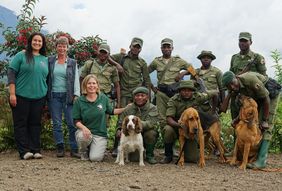 These days, most zoos make an enormous and steadily increasing contribution to the conservation of endangered species in their natural habitats. Not only do they sensitize many millions of visitors every year to nature conservation issues, they are also focusing more and more on mobilizing these people as allies in species conservation. This becomes abundantly clear if you look at how fundraising for conservation has developed over the last 10 years at Wilhelma, the Zoological and Botanical Garden in Stuttgart.

In 2009, new ways of fundraising were developed for the first time - quite different from merely putting up donation boxes: a collection station for discarded mobile phones was placed in the former ape house. It was anything but certain that the zoo visitors would actually bring their old mobile phones with them in order to donate them to mountain gorilla conservation. But, having said that, the initiative known as the "mobile phone project" collected over 1000 devices in the first year alone, and, over the next 10 years, raised over 50,000 euros for the protection of gorillas in Africa - all thanks to the zoo visitors.

Since then, Wilhelma has continuously expanded its creative fundraising, for example by selling artworks with wildlife motifs or organising "Great Ape Lotteries". By 2017, 80,000 euros were being collected every year, all of which was donated to in situ projects. Since 2018, the growing importance of species conservation at Wilhelma has been reflected in a specific budget line of 150,000 euros. The first use of this money was for the purchase of valuable rainforest areas in Belize in order to connect existing protected areas to each other through a biological corridor. This provided long-term security for 400 km2 of forest, equating to the territories of at least 20 jaguars.

The most far-reaching step in establishing the zoo as a powerful ally for in situ projects was taken in the spring of 2019. Since then, Wilhelma has been inviting its visitors to participate in the fight to conserve biological diversity. The "Conservation Euro" is in principle included in the adult ticket price, but every Wilhelma visitor can decide at the entrance gate whether he or she wishes to make this contribution. 100 % of the proceeds are invested in further species protection projects - there are no administration fees whatsoever. The experience of the first 6 months shows that the public appreciates the importance of the issue: over 85 % of adult visitors pay the extra euro.

By mid-2019, the financial commitment to the protection of species world-wide, which began with a few thousand euros in 2009, has increased to over half a million euros. Currently, more than 20 projects are supported with these funds. The species that benefit range from the Vinaceous-breasted amazon parrot in Brazil to the Sumatran rhino in Indonesia and the Tequila splitfin in Mexico, which, while extinct in its natural habitat, is bred in zoos and for whose release back into the wild entire river sections are being re-naturalized.

Wilhelma is known for its successful keeping of apes, and if you look at what the zoo is doing to assist the survival of orang-utans, bonobos and gorillas, it becomes even clearer what an important impact a dedicated zoo can have on the work of local conservationists.

In Borneo, Wilhelma has been involved in the reforestation of the Lamandau River Reserve in Kalimantan, Indonesia since 2009. This is an area where wild orang-utans roam and where confiscated animals are reintroduced into the wild. In 2019, the Conservation Euro made it possible to invest an additional 30,000 euros in the area to reforest another 9 ha in order to connect existing forest patches with each other. In areas that were reforested 10 years ago with the help of Wilhelma, the trees have now grown so tall that they offer a habitat to the orang-utans once again: two orang-utan mothers with recently-born offspring have just been spotted there.

In the west of the Democratic Republic of the Congo (DRC), bonobos are at risk from poaching and the illegal pet trade. To protect this species, Wilhelma now supports three initiatives with a two-pronged approach: to reach the urban population, local music stars are recruited to compose popular songs about the bushmeat trade; and in those areas where the great apes occur, the villagers are involved in anti-poaching patrols. "Lola ya Bonobo" near Kinshasa, where orphaned bonobos are reared, has received financial support from Stuttgart for years; a 10,000 euro financing gap for the reintroduction of 14 animals planned for the end of 2019 was also bridged.

On the other side of the DRC, in the Virunga National Park, a specially founded sniffer dog squadron, the so-called "Congohounds", has helped protect the mountain gorillas since 2012. Wilhelma has donated over 150,000 euros to the project, financing dog training, veterinary treatment and several off-road vehicles, as well as environmental education for young Congolese.

The park is home to about one third of the remaining mountain gorilla population. The other two thirds live in the neighbouring countries Rwanda and Uganda – and of course the animals also cross the borders, which are not their concern. The dog handlers work tirelessly to protect the wildlife in this troubled area. This is the most dangerous national park in the world in which to work: during the last 10 years, 175 park rangers have died in armed conflicts, mainly with rebel groups. Intermittently, oil companies put the very existence of the park at risk. Last but not least, the area faced an outbreak of Ebola in 2018 which continues to be a problem in 2019.

The problems often seem overwhelming and the solutions are not simple. However, the work of dogs and rangers makes the situation in the park safer in many ways. The dog squadron patrols forest areas, takes out snares and arrests people who illegally produce charcoal in the habitat of the gorillas for sale in the city. Poachers and anyone else breaking the law in the park can be tracked by the dogs over dozens of kilometres to the villages outside the park even days afterwards - just because of a discarded cartridge or a cigarette butt. The abilities of the dogs appear unbelievable to the local people and act as a deterrent. Over the last 3 years, there has been only one case of elephant poaching in the park and not a single gorilla has been killed by poachers during this time.

The dog squadron in Rumangabo, the headquarters of the Virunga National Park, is not the only place where Wilhelma works in support of gorillas. Several other projects in the region have been supported via Berggorilla & Regenwald Direkthilfe. Mount Tshiaberimu, located on the western side of Lake Edward, is also part of the Virunga National Park and is where the second subspecies of the eastern gorilla, Grauer's gorilla, can be seen. Here too, local projects are attempting to relieve the pressure of the population on natural resources. In 2018, Wilhelma financed a bamboo project that supplies sustainably harvested construction material and firewood. A little further east in Sarambwe, which is a protected area of 900 ha, a total of 20,000 euros were invested over several years in the equipment of the local rangers. Uniforms, boots and binoculars suitable for field work were purchased and derelict ranger posts were rebuilt.

While the western lowland gorilla, one of two subspecies of the western gorilla, is kept in zoos all over the world and regularly produces offspring in captivity, the status of the population of Cross River gorillas, the second subspecies, is critical and there are no "back-up populations" in captivity. At best, 250 animals may survive in western Africa, which means that this subspecies is much more threatened than the better-known mountain gorilla. IUCN lists the Cross River gorillas as "critically endangered". In Cameroon, an environmental education project is now tackling the root causes. Via Berggorilla & Regenwald Direkthilfe, Wilhelma finances local educators who use specially developed teaching materials and workshops lasting several days to educate school children who live in the range of the Cross River gorillas about the great apes. In this way, the "Great Apes Education Program" shows children and young people potential viable action to protect the animals.

All over the world, the challenges that nature and species conservation face are enormous. On the ground, the situation can be sobering in many cases. However, with adequate effort it is possible to save species from extinction and protect habitats from destruction. Wilhelma has successfully accepted this challenge - and thanks are due to the zoo visitors for showing solidarity.