A Tragedy in Bwindi 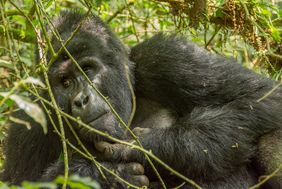 The silverback Rafiki was killed in Bwindi Impenetrable National Park, presumably by poachers. Rafiki was a member of the mountain gorilla group Nkuringo since 2003, he was found dead on 2 June 2020. His dead body was examined by the Gorilla Doctors and exhibited a large stab wound resulting of a spear, which was identified as the likely course of death. The UWA (Uganda Wildlife Authority) announced that 4 poachers were arrested in connections with Rafiki's death. The Nkuringo group is one of the groups regularly visited by tourists. After Rafiki's death it consists of 16 animals - 3 blackbacks, 8 adult females, 2 juveniles and 3 infants. Following the death of the only silverback the fate of the group is uncertain. Substantial changes in the group's composition are likely and will be closely monitored by the Gorilla Doctors and the UWA. Especially the youngest members face a high risk of not surviving changes in group composition. This makes Rafiki's death a tragedy in many aspects.