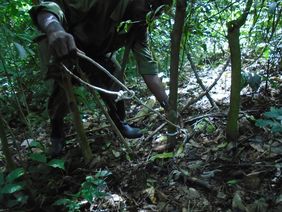 Great ape conservation experts from the Great Apes Survival Partnership (GRASP) and the International Union for Conservation of Nature (IUCN) recently produced a report on the status of great apes and threats to their survival for CITES - the Convention on International Trade in Endangered Species of Wild Fauna and Flora (GRASP & IUCN 2018). During preparation of this report, we were asked to review usage of the word "poaching" and clarify its different meanings.

All great apes are protected by national and international legislation, so it is illegal to kill or capture them and to trade live animals or their body parts in all great ape range states (IUCN 2018). Such killing and trade are, therefore, termed poaching. Different types of poaching can be distinguished by the motivation for or the context in which killing takes place, and I developed the framework below to provide more specific terms and facilitate a better understanding of the context in which great apes are killed.

This framework is based on what is essentially common knowledge tamong people working in the field, but is not usually explicit when poaching is reported. It would be useful for researchers to adopt the classification presented here and use it when recording incidents of great ape killing and illegal trade in body parts and in live individuals.

Type 1 poaching: Great apes are targeted and killing is intentional

1a. Bushmeat: Poaching for bushmeat is one of the greatest threats to most great apes (IUCN 2018). Most killing in this context is opportunistic: hunters tracking other species, such as antelopes or monkeys, may come across and kill great apes. However, in some range states, great apes are occasionally targeted to serve their meat as a delicacy or high-status food at traditional or political functions. If infants captured alive when their mothers are killed for bushmeat are trafficked illegally, this trade in orphans is a by-product of poaching for bushmeat, so it is classed as bushmeat poaching.

1b. Conflict: Great apes are killed over competition with humans for natural resources (see Hockings & Humle 2009). Illegal killing and capture may occur on a large-scale when natural habitat is cleared or converted to other land uses. Also in this category are retribution killings motivated by crop-foraging or people being injured.

1c. Superstition: Great apes are sometimes killed for traditional ceremonies and "medicine" - superstitious beliefs, including black magic. However, "secondary use" of ape body parts for superstitious purposes when the primary motivation for killing was to obtain meat is classed as bushmeat poaching (e.g. bones or digits used to confer "strength" upon hunters or human infants).

1d. Live: Live capture of infant great apes, which is in itself illegal, includes associated killing of conspecifics, as obtaining an infant necessitates killing the mother and usually other group or community members. In this category, taking a live infant is the primary motivation (however, the majority of orphaned infants thought to be destined for the illegal wildlife trade are trafficked as a "by-product" when obtaining bushmeat was the primary objective).

1e. Politically-motivated: Killing of great apes can result from conflict with governing bodies, usually the protected area authorities, or with law enforcement agents.

Type 2 poaching: Great apes are not targeted or killing is not intentional

2a. Indiscriminate: Great apes are accidentally caught in snares intended for other species. Often the apes are maimed and may lose a hand or foot. Such incidents are fatal when the animals are unable to free themselves, or when gangrene or septicaemia ensues.

2b. Collateral: Great apes have been killed in crossfire - shot in civil conflicts. Even when such killing is accidental, the ape is usually eaten.

For details on the types of poaching that threaten each species and subspecies of great ape, please see the GRASP & IUCN report, and for information about all threats to great apes, refer to the IUCN Red List of Threatened Species (IUCN 2018). With thanks to the GRASP & IUCN report contributors for reviewing this framework and to Tatyana Humle, Fiona Maisels and Julie Sherman for their input.