The Gorillas of the Ebo Forest, Cameroon 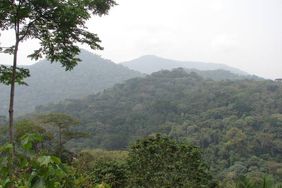 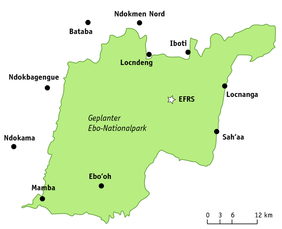 Cameroon is an important country for both gorillas and chimpanzees. To the south of the Sanaga River, western lowland gorillas (Gorilla gorilla gorilla) exist, often sympatrically with central chimpanzees (Pan troglodytes troglodytes). To the forested region northwest of the Sanaga River the Nigeria-Cameroon chimpanzee (Pan troglodytes vellerosus) is present (Gonder et al. 1997), as well as a small remnant population of Cross River gorillas (Gorilla gorilla diehli) peppered along the Cameroon-Nigerian border area (Morgan & Sunderland-Groves 2004). The Cross River gorillas are separated from gorillas south of the Sanaga River by c. 250 km and appear to be morphologically (Sarmiento & Oates 2000) if not genetically (Clifford et al. 2004) distinct.

We continue to seek strong local support for our work, and tread a delicate line between striving to conserve the forest and its fauna whilst remaining understanding and sympathetic to the concerns of the local peoples. Importantly, we continue to have an excellent relationship with the traditional ruler of this district of Ndokbiakat, His Majesty Dipita Gaston, who has supported our project from the start and is an important bridge between us, the exterior elites, and the local peoples.
In summary, we continue to have a strong presence in the forest, in the villages, and with the authorities and our partners in the towns and cities of the region. We are resigned to a long period of slow and steady progress, with setbacks and challenges dogging every step, but we believe that the eventual demarcation of a national park, with effective management strategies put in place by the Government, accompanied by strong enforcement and education policies, will allow for the development of a successful protected area with all of its benefits felt by the local populations - both human and great ape.

Acknowledgement
This work could not have been possible without ongoing support from the Zoological Society of San Diego, Offield Family Foundation, USFWS Great Ape Conservation Fund, USFWS African Elephant Conservation Fund and the Margot Marsh Biodiversity Foundation, to whom we are extremely grateful. We work in conjunction with the Government of Cameroon (MINFOF and MINRESI) and with WWF and WCS in Cameroon, and we also thank our hard-working staff for their commitment and dedication to their work.