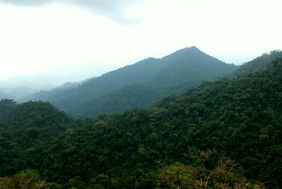 In January 2014 I started to study the ecology of Cross River gorillas at the Tofala Hill Wildlife Sanctuary (THWS) in collaboration with the local NGO ERuDeF (Environmental and Rural Development Foundation), which has been responsible for the research in the area since 2004. The aim was to find information about the nesting and feeding behaviour of Cross River gorillas and to calculate their population size and density.

The Tofala Hill Wildlife Sanctuary became a protected area in September 2014, prior to which the area had no status of protection. This population of Cross River gorillas was discovered in 2004 during a survey by ornithologists. It is a very special population because it marks the most southeastern occurrence of the Cross River gorilla range; it is located 40 km from the next known gorilla population in the Mone Forest Block, and it was estimated that between 20 and 30 individuals were living in the sanctuary. Among the 14 Cross River gorilla subpopulations, the Tofala population is the only one about which no scientific data have been available, and the anthropogenic pressure exerted upon the gorillas living in the examined area is very high because there are ten villages adjacent to the area.

The area of the THWS is 8,087 ha. There are steep mountains rising from the western edge of the reserve to the eastern side of the area; elevation varies from 250 m around the villages of Besali and Bechati (in the West) to 1,900 m in Fossimondi (in the East). The vegetation is mainly tropical rainforest, changing into montane forest above 1,400 m, and above 1,800 m there is anthropogenic grassland. There is a long rainy season from March until November with an average rainfall of 2,420 mm.

There were 12 two-week expeditions to the THWS in 2014, 2015 and 2016. Data were collected from the early dry seasons (November) to the mid rainy seasons (June). It seemed that gorillas avoided the southern part of the reserve, since there is not much forest left; also the northern area of the sanctuary showed no signs of gorillas. The northern part is less hilly and does not have the steep and high mountains of the central part of the sanctuary, which makes it more easily accessible for people, and all signs of gorillas were found in the central part of the THWS, in an area of 6.5 km². Because the gorillas are rare and elusive, the data were collected based on following their trails.

There are ten villages surrounding the area, hence, it is not surprising that there was and still is much illegal farming and poaching inside the forest. 42 gun shells were found on 5 expeditions in 2014. In 2015 there was a decrease in hunting with rifles with only 20 gun shells found in the same area, but at the same time hunting with snares increased from 40 snares found in 2014 to 55 snare traps in 2015.

Talking to local hunters showed that most of them do not shoot gorillas because of traditional beliefs of the people who are living west of the THWS. Some hunters from the highlands on the eastern side of the sanctuary do not share that view and do not hesitate to kill gorillas. In March 2013, a silverback left the THWS and walked 14 km northeast. When it came close to the village of Pinyin, it was killed by an angry crowd of people. Law enforcement is difficult in a remote area like the Lebialem Highlands, with low risk of prosecution.

Farming was another problem in the THWS. Before the area became a wildlife sanctuary, people were establishing new farms inside the forest at very high rates, using the slash and burn method to transform the rainforest into farmland. Since January 2014, at least 77 new farms were created within the reserve, with an average size of 1.8 ha. Most of the farms were located close to the communities, but people are starting to make their farms deeper and deeper inside the forest, so that even the most remote areas of the sanctuary are affected by farming. Many farmers do not know its boundary since there are no marks even today to show were the sanctuary begins.

There are different factors that affect the nest site choice of gorillas. Food, preferred nesting trees and predation risk can influence the selection of nest sites. 31 nest sites with a total of 52 gorilla nests were found. The gorillas at the THWS preferred to build their nests on steep slopes, with an angle of more than 45°. 74 % (22 nests) were built on steep slopes, 23 % (7 nests) were found at moderate slopes (25-45°) and only one nest was made in a flat area (3 %). Steep slopes protect the gorillas from getting surprised by poachers, who mostly hunt during the night.

Feeding Ecology of Gorillas at the THWS

The Tofala population of gorillas showed some special adaptions in their feeding behaviour compared to other Cross River populations. Normally Cross River gorillas show a diet comparable to the diet of western lowland gorillas. The gorillas of the THWS mainly fed on terrestrial herbaceous plants (61.5 % of all feeding signs); fruits constituted 22.5 % of the diet; and leaves were consumed in 16 % of all feeding cases.

Gorillas at the THWS generally looked for food on farms that had been illegally established in the forest, and they frequently raided farms inside the forest to eat the stems of banana plants (Musa spec.), which was the most consumed plant species in Tofala during the study period. It might be possible that fruits make up a higher portion of the gorillas' diet during the late rainy season, but there were no expeditions between July and October.

It was in particular farms far away from the communities that were regularly visited by gorillas. Farmers placed human-looking puppets on the farms to prevent gorillas from raiding them, but the puppets seemed to have no impact, and did not stop gorillas from entering the farms.

A three-month camera trap survey was conducted from January to April 2016 to calculate the population size and density of gorillas at the THWS. The camera traps were placed in a 2 x 2 km grid in the central part of the sanctuary, and there were eight stations of camera traps inside the forest. No gorilla was recorded while the cameras were in the field for 76 days.

The only image of a gorilla at the THWS was recorded in January 2014, so nest counts were used to calculate the population size and density. The population size was calculated with the program "Presence". The results were shocking, indicating that there are only two to four gorillas left in the sanctuary, at a population density of just 0.03 gorillas per km². The numbers seem to be realistic because the maximum nest group size was three nests and because no camera trap was able to picture a gorilla during the survey period. There have been three very short direct observations of gorillas by the guides and volunteers in 2014 and 2015; they saw one or two gorillas at these sightings.