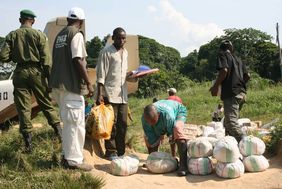 The 2009 statistics for these village clusters were obtained from the sector office.

The Kasese region contains the Kahuzi-Biega National Park (KBNP), the Maïko National Park and various forests that are not gazetted as protected areas but have been earmarked as community reserves since 2000. This region is recognized for its high density of Grauer's gorillas (Gorilla beringei graueri) - approximately 86% of the total population of this endangered ape, which is endemic to the Democratic Republic of the Congo, occurs here.

Until very recently, no conservation or research initiatives had been carried out in this region since the armed conflict started up in the Congo in the 1990s. It took 20 years for the security situation in eastern parts of the Democratic Republic of the Congo to stabilize sufficiently to allow the Congolese Institute for Nature Conservation (ICCN) to begin to exert its authority in the low-altitude sectors of the park. This was achieved with the help of the Institute's partner organisations.
An ICCN office has just been opened at Kindu, Maniema Province, to facilitate lobbying and sensitization of the political leaders. Contact has been re-established with the authorities of Maniema Province, the local population and the territorial leaders. Biological resurveys have been started in the part of the park located in Maniema Province, Punia Territory, Babira Bakwame county (collectivité secteur).
Two missions have recently been completed to this sector. One of them was a follow-up to an activity initiated by Radar Nishuli, the Director of KBNP, in November 2009. He worked in the main towns of Maniema Province to sensitize social and professional groups concerning the protection of this World Heritage Site. He managed to enlist the authorization and support of the political-administrative, traditional and military authorities for the purpose of initiating protection and development activities - as has been done in the other sectors of the KBNP. The aim of the second mission was to survey a part of the park where no such biological study had been conducted to date. The aims of the two surveys were:

The whole of the Babira Bakwame county sector consists of 6 village groupings.

Although the local community subsists on what they hunt and cultivate, we could only count 16 goats and 38 pigs in Kasese centre. The main source of animal protein for the community must therefore still be bushmeat, which they catch either by hunting with traditional weapons or fire arms, and by trapping. Alternative solutions need to be found for this area as soon as possible.
Kasese has no drinking water. Kasese village has between 5,000 and 8,000 inhabitants. The authorities find it hard to determine the number more precisely, as there is a lot of movement between the village and the mines. Kasese has only one place where drinking water is available; this is a waterhole left behind by SOMINKI (the Mining Society of Kivu) in the 1980s. It may dry out any time, and then there will not be any drinking water at all. The women get up at 3 am to fetch the precious liquid. Some people fetch water from the Ona River, which exposes the communities to disease and also carries a certain risk of drowning.
Schools without buildings. By way of educational facilities, Kasese has two senior schools, the Bakwame Institute and the Ndeke Institute, and two Catholic primary schools, but none of these schools have buildings. The children study outside, exposed to the elements.
Hospital without beds. What is left of the health services infrastructure is a laboratory open to the sky. The microscope is installed in a small hall made from sticks and covered by local materials, without any protection. Inside the hospital, the patients are lined up on wooden beds without mattresses.
Peace and quiet and absolute security. Total peace reigns in Kasese and its surroundings: there are no security problems. The local people cover distances of over 50 km on foot, both by day and by night, without being harassed.
Infrastructure and transport are practically non-existent. The Babira Bakwame sector is completely isolated, Kasese in particular. It can be reached only by small airplanes carrying traders and miners. On a motorcycle it takes 3 days to cover the 125 km to reach Punia, the main town of the territory.
The state of settlement in this sector calls for priority actions such as:

The way in which the park is seen by the local communities and the politico-administrative authorities is apparent from the following declarations of the traditional chiefs: "We understand that you have a very difficult mission to accomplish. As you have emphasized, it is up to us as the relevant authorities to facilitate the mission in as far as we are involved in it." The assistant to the administrator continued: "On behalf of the administrator whom I represent here, I assure the ICCN that it has our complete support. As a state service, it must benefit from our protection."

It should be noted that the KBNP boundary runs through the village grouping of Banamukulumanya, where the "Bino" clan lives.

This population lives from mining, hunting and cultivation. The mine owners report that 10,000 tons of cassiterite leave the area via Kasese airport every week, but this volume does not include the quantities the local people transport on their heads to various points that are not officially licensed to sell the mineral.

As mentioned previously, the objective of the second survey in Kasese was to collect biological data and information on illegal activities in order to complement data collected during the first survey. These data are currently being analysed and the results will be published shortly.

We would like to express our gratitude to our partner organisations, the Wildlife Conservation Society and the Prague Zoo, for providing financial support for these expeditions. We would also like to thank those who will support our community conservation approaches, leading to the establishment of a ranger post in the park and provision of support for development activities in this sector.