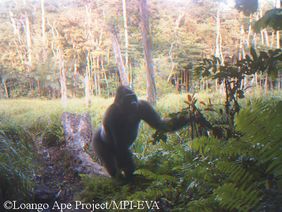 Camera trapping has become a predominant method for wildlife monitoring (Burton et al. 2015; Steenweg et al. 2017), including primates (Gerber et al. 2014), while little is known about how the animals themselves perceive and respond to these strange new items introduced into their natural habitats. Therefore, in a recent article we investigated the reactions of wild African great apes, namely bonobos, chimpanzees and gorillas, when faced with this novel object: the camera-trap device. Ultimately we were interested in describing and quantifying behavioural responses to camera traps to gauge variation across species, social groups and individuals in the wild; however, our results also have implications for conservation and monitoring efforts of great apes.

The original study included 43 great ape social groups which were all naïve to camera traps, meaning there was no record of, or known exposure to, these devices in the territories of these great apes. Of these 43 groups, 22 were western lowland gorilla groups and one was cross river gorillas. These data had been collected as part of the Pan African Programme (PanAf) where camera traps had been installed at 14 field sites including habitats where chimpanzees and gorillas are sympatric (live in the same area).

Black Bushnell Trophy camera traps were used at most sites while some of the field sites where data collection occurred early on (e.g. Loango, Gabon) used older models. Importantly, each field site was controlled in all analyses to account for any variation according to site-specific differences in camera-trap placement or type. Camera traps were installed on the ground by PanAf field teams along travel paths, near fruit trees, natural log bridges, and water sources.

We first screened all camera-trap videos of great apes for a 'looking impulse', where at least one individual in the video orients face-forward to the device and looks at it (Berlyne 1966; Haude et al. 1976). The looking impulse was used to code great apes’ visual interest in the novel device. After this, we closely examined all reaction videos and used a detailed ethogram to code the neophobic and neophilic behaviours exhibited by the individual apes who looked at the camera. Neophobic, or fear-based behaviours included the production of alarm calls, displays, startle response and retreat from the device. Neophilic, or curiosity-based behaviours included approaching or touching the camera. We further recorded the duration in seconds that an individual spent looking at the camera trap. Due to the nature of camera-trap videos we could not identify all individuals observed in every video; therefore, we conducted analyses on two levels: the social group and the individual. We first calculated all camera-trap events (consecutive videos on the same device within 15 minutes of each other; McCarthy et al. 2018) per group where at least one individual displayed a looking impulse. Of those events, we calculated the proportion where at least one neophobic and at least one neophilic response was observed. Overall, neophobic and neophilic reactions to the device were rare.

Analyses at the group-level showed that bonobos had the strongest looking impulse of the great apes, followed by gorillas, with chimpanzees having the lowest proportion of reactions to the camera trap. However, bonobo and gorilla groups did not significantly differ from one another in their looking impulse tendency, suggesting that these species generally take notice of the novel device much more often than chimpanzees.

We proposed that these species-specific differences could reflect variation in leadership styles within the societies of bonobos, gorillas and chimpanzees. In particular, when there is a clear dominance hierarchy (e.g. chimpanzees) there is more likely to be clear attribution of leadership irrespective of sub-grouping patterns, whereas in more egalitarian species (e.g. bonobos) this may be more difficult to ascertain (Surbeck et al. 2017), leading individuals to be more cautious overall about their surroundings. Group decisions in gorillas are often thought to be controlled by the silverback (Watts 2000), and here we propose that variation in the personalities of silverbacks of each group may drive the large variation we observed in gorilla reactions. Moreover, bonobo groups also demonstrated neophobic behaviours more often than both chimpanzees and gorillas, while gorilla and chimpanzee groups did not differ in their tendency to give neophobic responses toward the camera trap.

It is important to note that our analyses controlled for repeated observations per group and field site. Our analyses simultaneously tested for additional effects, including the presence of conspecifics, the occurrence of a long-term research site within 5 km of the group's territory, and hunting pressure (encounter rate of hunting signs found during line transect surveys). We found that in areas with greater hunting pressure there was a reduction in neophobic responses, which may be due to great apes becoming habituated to encountering human objects in these areas and/or perhaps because hunters do not target great apes due to protection provided by local hunting taboos. We did not know enough about the hunting activity at these sites, however, to gain any further insight into potential mechanisms.

For the individual-level analyses, we tested variation in the time spent looking at the camera trap. Here we found no species-specific differences but did find support for young individuals looking significantly longer than mature individuals. This supports results in other animal behaviour studies where juveniles are often the most curious and exploratory since this phase of development is associated with learning about one's social and physical environment (Massen et al. 2013; Visalberghi et al. 2003). We further found support for the commonly known 'many eyes' hypothesis (Pulliam 1973) whereby individuals spent less time staring at the camera trap when they were together with more conspecifics. Individuals can essentially afford to be less vigilant when there are other group-members present. The presence of a long-term research site was also associated with a lower looking time, suggesting there may be a desensitization to novelty in general when individuals have had prior experience with humans.

In sum, camera traps are an excellent, cost-effective tool for monitoring wildlife, however, biologists and conservationists should demonstrate caution when installing these devices in wild habitats, especially those where animals are expected to be more naïve to human presence and human objects. As shown in our study, cryptic species like great apes can demonstrate overt behavioural reactions toward camera-trap devices and therefore can cause mild disruption to the natural activity of the animals. For example, apes might avoid visiting or using areas monitored by cameras (e.g. travel routes or fruit trees).

However, this study and decades of experience working with wild great apes also suggest that habituation and desensitization to camera traps may occur quickly.

Therefore, by considering the behavioural reaction, or lack thereof, toward the camera trap, biologists should be able to gauge the potential disruption to the natural behaviour of the apes and thereby make allowances in their study design and analyses to account for any complications that might arise as a result (e.g. installing a habituation phase where apes can get used to the new devices and data do not contribute to the overall goals of the study). Additional precautions biologists might want to consider depending on the species, population, environment and aims of the study, include positioning devices to avoid the eye line of individuals (i.e., this should reduce the chance that the apes notice the camera), and leaving enough space around important resources, such as water and fruit trees, for apes to access these without passing directly in front of the device should they be scared.

In general, new technologies like camera traps, drones and acoustic recording devices are incredible tools for monitoring wildlife at unprecedented scales, however, we must always consider and mitigate their potential effect on naïve animals.

The PanAf methods used in the field to install, maintain and collect camera-trap observations can be found freely online in both English and French for others to use.