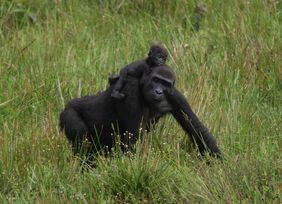 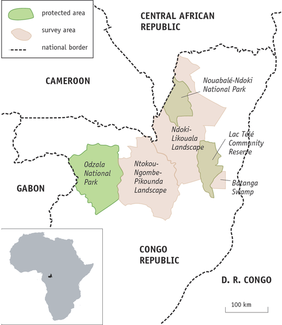 The survey area (© Angela Meder, Adapted from an original map by WCS)

On 5 August, 2008, at the XXII International Primatological Society Congress in Edinburgh, the Wildlife Conservation Society (WCS) announced the results of a ground-breaking series of western lowland gorilla surveys conducted in the northern Republic of Congo, one of the last remaining strongholds for this species. The results estimate a total population of 125,953 individuals (90,325-161,545) living in 47,444 km² of contiguous lowland and swamp forest. This estimate exceeds the previous global estimate for the species and confirms the Republic of Congo as harbouring arguably the largest remaining populations of western gorillas in Africa.

Surveys in the 1980s indicated that healthy populations of western gorillas existed in many areas remote from human settlements (Harcourt 1996). In spite of legal protection across their geographic range, recent evidence has indicated that western lowland gorillas are declining rapidly, through a combination of commercial hunting, the spread of logging, which alters forest structure and opens up remote forest blocks to facilitate poaching, and Ebola hemorrhagic fever (Tutin et al. 2005). Commercial hunting and Ebola alone are thought to have reduced the western gorilla population by over 50% in the last three decades (Walsh et al. 2003), to the extent where the species was recently upgraded to "Critically Endangered" in the IUCN Red List of Threatened Species (Walsh et al. 2007). Most of the world's remaining western lowland gorillas are found in the Republic of Congo and Gabon (Harcourt 1996). Low human population densities (< 1/km²) combined with relatively poorly developed infrastructure and access has, until recently, largely protected these forests and their wildlife from human disturbance and depletion.

In the 1980s and 1990s, surveys in the northern Republic of Congo indicated that the region was of great importance for western lowland gorillas (Gorilla gorilla gorilla) and other endangered large mammals. Since 1991, WCS has worked together with the government of Congo and other partners to establish an effective conservation program in the region. In 2006 and 2007 WCS implemented a series of great ape surveys across northern Republic of Congo (see map). The surveyed area represents one of the most important remaining blocks of habitat for western lowland gorillas, covering 47,444 km² of contiguous lowland forest. The surveys were conducted in three phases, corresponding to three adjacent survey zones.

Ndoki Likouala Landscape (27,970 km²): The Ndoki-Likouala landscape includes two protected areas (the Nouabalé-Ndoki National Park and the Lac Télé Community Reserve), and several surrounding logging concessions. In collaboration with the government of Congo, WCS have been working in this landscape for the past 17 years. The primary objective of the surveys across this zone was to assess the population status of great apes in response to conservation interventions. This was the first systematic and standardized survey of the entire zone.

Batanga swamps (1,029 km²): The Batanga swamps represent a largely unexplored area of Raphia swamp forest between the Ndoki-Likouala Landscape to the west, and the Batanga River to the east. Reconnaissance missions conducted in the 1990s indicated these swamps support large populations of gorillas (Blake 1995; Fay & Agnagna 1992; Fay et al. 1989), but these forests have never previously been systematically surveyed. The primary objective of the surveys here was to assess the population status of gorillas and the potential for expansion of conservation activities into this area.

Ngombe-Ntokou-Pikounda Landscape (18,455 km²): The Ntokou-Ngombe-Pikounda landscape includes the Ngombe timber concession, and the remote Ntokou-Pikounda forests to the south and east. The site is covered by very large tracts of Marantaceae forest to the west and north and by swamp forest to the east and south. To the west lies the Odzala-Koukoua National Park. It was the site of the last recorded Ebola outbreak in May 2005, which affected both human and gorilla populations (Caillaud et al. 2006; Devos et al. 2008). Prior recent outbreaks to the south and south west of the park were known to have devastated the previously high density gorilla populations (Bermejo et al. 2006). Reconnaissance missions conducted in the Ntokou-Pikounda forests in 1999 had suggested that it harboured large populations of great apes (Quammen 2001), but these forests have never before been systematically surveyed. The objectives of surveys in this zone were therefore to assess the population status of great apes in order to provide a baseline for effective protected area planning and management, and to identify evidence for Ebola impact on great ape populations in the landscape.

Line transect distance sampling was used to estimate gorilla density from nest counts (Buckland et al. 2001). Production and decay rates for nests were estimated and used to convert nest density into gorilla density (for details of survey design and analysis see Stokes et al. 2008). A total of 265 transects of 2 km in length were placed across the three survey zones.

The significance of this finding is two-fold. Firstly, it emphasizes the importance of scientifically rigorous survey methods in assessing and evaluating the conservation status of key species. Prior to these surveys the global estimate of wild western lowland gorillas was approximately 95,000 individuals (Butynski 2001). This estimate was based on range-wide extrapolation of data collected in the 1980s from a number of discrete survey locations in Gabon and the Republic of Congo (Harcourt 1996). However, in the light of both recent advances in survey techniques (Kühl et al. 2008) and, importantly, the recent documented declines in western lowland gorilla populations (Walsh et al. 2003; Devos et al. 2008; Bermejo et al. 2006; Huijgbregts et al. 2003), the validity of this figure is questionable (Walsh et al. 2007). Whilst we are unable to provide a revised global estimate of western lowland gorillas from our surveys, we are able to provide a revised baseline estimate for northern Congo, which represents a significant contribution to our knowledge of the current status of western gorilla populations and which provides a basis for monitoring the impact of future conservation efforts in what is undoubtedly one of the highest priority areas for the future survival of this species.

Secondly, the findings from these surveys highlight a number of key conservation issues and priorities for future conservation action. The majority of western gorilla habitat, and the majority of our surveyed gorilla population, lies outside of protected areas. In 2006, the government of Congo announced the proposed Ntokou-Pikounda Protected Area. We are keen to use our findings to work together with the government to catalyze the process of legally gazetting this protected area and promoting effective on-the-ground protection.

Many of the areas containing high densities of gorillas lie within sites managed in partnership between the government of Congo, WCS and other partners, including the private sector. The partnership with the timber concession holder CIB (Congolaise Industrielle de Bois) has yielded improved wildlife management and protection in over 13,000 km² of production forests surrounding the Nouabalé-Ndoki National Park. In June 2006, CIB's Kabo concession was the first timber concession to be awarded Forest Stewardship Council (FSC) certification in Central Africa. CIB's FSC-certified forests have now been expanded to 7,500 km² (Tropical Forest Trust 2007). These forests support some of the highest recorded densities of western lowland gorillas. Given the rate of expansion of commercial logging and mining operations across northern Republic of Congo, and indeed across much of Central Africa, we support the use of auditable timber certification schemes in production forests and the integration of best practices for reducing the impact of logging on great apes across their geographic range (Morgan & Sanz 2007) to ensure protection of gorilla populations in key habitats that lie outside of protected areas.

These findings are encouraging for the conservation of western lowland gorillas. The results indicate healthy populations in numbers higher than previously thought. The persistence of these populations can be largely attributed to the remote and inaccessible nature of the Ntokou-Pikounda forests and the Batanga swamps, combined with successful conservation investment in the Ndoki-Likouala landscape.

At the same time, however, northern Congo is subjected to similar threats to those faced by western gorillas across their range. Remote and inaccessible forests are fast becoming opened up and commercially exploited for natural resources. The result is escalating hunting pressure to meet the growing demand for bushmeat. Our surveys did not indicate evidence of recent Ebola outbreaks in the gorilla population. Nevertheless, expert opinion and research findings to date all point to this zone for the next predicted epidemic. The recent upgrading of the western gorilla to Critically Endangered on the IUCN Red List of Threatened Species was primarily due to the rapid rate of decline of the subspecies over the past 20 years in response to increasing threats from poaching and disease. We do not advocate for western lowland gorillas to be down listed. Rather, we support a renewed focus on addressing and mitigating the threats that endanger these last remaining populations and on preventing further population decline of this species.