Gorillas on the IUCN Red List of Threatened Species 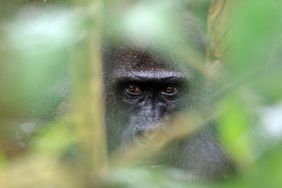 A recent change in the mountain gorilla listing on the IUCN Red List of Threatened Species from Critically Endangered (CR) to Endangered (EN) received extensive coverage in the media, not only because positive conservation stories are so rare, but also because this downlisting had been debated for a number of years (Harcourt 2007). The simple definition of an EN taxon is one considered to be facing a very high risk of extinction, whereas a CR taxon is considered to be facing an extremely high risk of extinction. These definitions are underpinned by quantitative rules relating to size of the population, the geographic range, or rate of population decline (IUCN Standards and Petitions Subcommittee 2017). Since it was established in 1964, the IUCN Red List has evolved into the world's most comprehensive source of information on the conservation status of thousands of species.

A look back at the history of gorillas on the Red List provides less information than one might hope, first because so little was known about most gorilla populations, and second because threat categories were based on subjective expert opinion without the guidance of objective criteria. During the first few decades of the Red List's development and evaluation, IUCN published regular updates that simply listed taxa with their range countries and a category of threat (PDFs are available via the IUCN Library Portal). The first detailed assessments of primates were published in a Red Data Book (Lee et al. 1988), when gorillas were considered to be a single species, Gorilla gorilla, with three recognised subspecies. Mountain gorillas were uplisted to CR in 1996 and, at that time, the subspecies classification of the Bwindi population was under debate (Sarmiento et al. 1996). The Nigerian "subpopulation" of gorillas (now "Cross River") was listed as CR in the same year, whereas all other African ape taxa were classed as EN.

In 2001, the Red List achieved a higher level of rigour when IUCN published Version 3.1 of its categories and criteria, developed through years of testing and consultation (Mace et al. 2008; Collen et al. 2016). Three categories of threatened species were defined: Critically Endangered, Endangered and Vulnerable, together with five criteria (A-E) based on population dynamics, geographic range and risk factors, along with numerous qualifying subcriteria. Also in 2001, the taxonomy of gorillas was revised by Groves (2001), who recognised two species - the eastern and western gorilla. Since taxa are usually reassessed at 5-10 year intervals, this "new" arrangement was not immediately reflected in the Red List.

Compiling and evaluating the best and most up-to-date information available on population status and the threats to a group of taxa, and recommending a Red List classification for each taxon, are among the key responsibilities of IUCN Species Survival Commission (SSC) Specialist Groups. Between 2006 and 2008, members of the Primate Specialist Group (PSG) reassessed all great ape taxa; however, little precise information about their population sizes existed, with the exception of the two least-numerous gorilla taxa - the mountain gorilla and the Cross River gorilla (described as a subspecies by Sarmiento & Oates 2000 and recognised by Groves 2001). To address the difficulty of assessing the global status of great apes while survey data remained piecemeal and dispersed, the Max Planck Institute for Evolutionary Anthropology established the IUCN SSC Ape Populations, Environments and Surveys (A.P.E.S.) database in 2005 (Kuehl et al. 2007).

The uplisting of western lowland gorillas from EN to CR made big news in 2008, when Peter Walsh was able to model the impacts of poaching and Ebola virus disease on this subspecies and to predict a population reduction exceeding 80 % over three generations (as stipulated in the Red List guidelines). At that time, we strongly suspected that Grauer's gorillas should also qualify for a CR listing, as threats to their survival were exacerbated by civil war and progressive fragmentation of the forests in eastern Democratic Republic of Congo (DRC). Armed groups, refugees and internally displaced people were putting enormous pressure on the region's natural resources; however, we lacked the quantitative data needed to demonstrate that the decline of Grauer's gorillas was likely to reach the 80 % threshold.

Meanwhile, although mountain gorillas in Rwanda and Uganda were thriving, the situation in North Kivu (eastern DRC) deteriorated drastically while we were reconsidering the subspecies' Red List status. In 2006, a crisis was declared in Virunga National Park due to high levels of poaching by armed militia, and in 2007, at least 10 mountain gorillas were massacred. Heavy fighting with the army did not stop the advance of a group of rebels, who occupied the Mikeno Sector of the park for over a year (Reuters 2008). Government rangers were forced to evacuate the park, leaving the gorillas totally unprotected, and the PSG decided not to recommend a change to the Red List classification of mountain gorillas during this acute crisis.

In 2016, we began working on new assessments of all the great apes with significantly improved data quality and coverage. Massive efforts went into collating and analysing years of survey data from across the geographic ranges of both Grauer's gorillas (led by Andy Plumptre and Stuart Nixon) and western lowland gorillas (led by Samantha Strindberg and Boo Maisels). Both groups used new modelling techniques to predict population abundance, distribution and rates of decline, and both provided robust support for CR listings (Plumptre et al. 2016; Strindberg et al. 2018).

During the conflicts in eastern DRC, military personnel and numerous militia facilitated access to firearms and were implicated in illegal mining activities, both of which intensified poaching for bushmeat. Thousands of Grauer's gorillas were slaughtered as food for the illegal miners who invaded protected areas (Spira et al. 2019), and the gorillas' strongholds of Kahuzi-Biega and Maiko national parks were at the epicentre of this illegal resource extraction. Now able to quantify the Grauer's gorilla population reduction since 1994, we estimated a shocking 77 % drop in their numbers to just 3,800 individuals.

The reassessment of mountain gorillas was postponed until 2018 while new surveys were ongoing, the results of which (Hickey et al. 2019) confirmed that the Virunga population is increasing and, with 600 mature individuals, the population size has exceeded the CR threshold of 250 mature individuals. The recent assessment of mountain gorillas was, therefore, based on their restricted geographic range. The Red List's B criterion uses Area of Occupancy or Extent of Occurrence, and a limited number of locations, as measures of the spread of risk to a species, and this reassessment resulted in a change of category from CR to EN. This positive move on the Red List will, however, be reversed if threat levels increase drastically. The current Ebola outbreak in North Kivu presents a very serious threat to the gorillas in Virunga National Park and is being closely monitored (Gorilla Doctors 2019). The ongoing threats to mountain gorillas are described in detail in the full version of the Red List assessment, which is available as a user-friendly PDF download.

It is important to bear in mind that the IUCN Red List classifies extinction risk rather than rarity (Collen et al. 2016). These new assessments, undertaken in an objective manner with rigorous and transparent application of the IUCN categories and criteria, resulted in the more numerous and widely distributed Grauer's gorillas being classed as facing a greater risk of extinction than the smaller, range-restricted population of mountain gorillas. Although the distance separating the two subspecies that occur in the same region seems negligible, mountain gorillas are not targeted for their meat, whereas poaching and the commercial bushmeat trade are driving the rapid decline of Grauer's gorillas throughout their range. If these trends continue unabated - if the decimation of Grauer's gorillas is not halted, if mountain gorilla population growth is not constrained by available habitat and there is no catastrophic disease outbreak - 20 years from now, mountain gorilla numbers could surpass the total number of Grauer's gorillas remaining.

My thanks to Anthony Rylands, Anna Behm Masozera and Mike Hoffmann for reviewing and significantly improving this article.