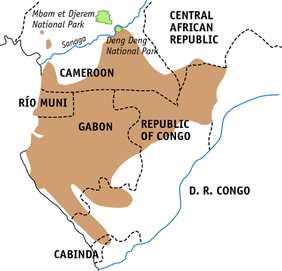 In 1998 an environmental impact survey of a proposed oil pipeline route from Chad to Cameroon was commissioned by the Cameroon Oil Transportation Company, COTCO (Dames & Moore 1999). The survey revealed that an area along the pipeline known as Deng Deng, a forest block physically separated by savannas and agricultural lands from most of the forests of southern Cameroon, harboured interesting populations of large mammals, including elephants, chimpanzees and western lowland gorillas (Gorilla gorilla gorilla), plus a variety of animals from both forest and savannah habitats (Dames & Moore 1999), reflecting the mosaic of savannah and forest found at these latitudes in Cameroon. These gorillas are the most northerly population of western lowland gorillas in existence. Only the Cross River gorillas (Gorilla gorilla diehli) range further north.
Subsequent surveys by WCS Cameroon focused on two areas identified by the first impact assessment surveys (the Deng Deng Sanctuary and the Belabo Communal Forest). Results suggested that these areas still maintained viable populations of both gorillas and chimpanzees, and that the conservation value of the area merited its gazettal as a protected area (Fotso et al. 2002). Deng Deng lies just to the east of the Mbam et Djerem National Park, which was gazetted in 2000, but which has no gorillas. Deng Deng and Mbam et Djerem are separated by the Sanaga River, a major biogeographical barrier in the region, already noted for chimps (Gonder et al. 2011) and other species.
More surveys in parts of the same general area were carried out in 2004 and 2007, this time as environmental impact studies for the proposed Lom-Pangar dam just to the east (Monfort et al. 2007). The encounter rate of both chimp and gorilla nest group sites had not changed since the 2002 study: an encouraging finding which underlined the support that should be given to the creation of a protected area in the location of Deng Deng.
A comprehensive study of all of the available likely forest that could be reasonably gazetted as a protected area was then carried out by WCS in 2008 (Maisels et al. 2009), to draw up suggestions for both the exact location of the most important areas for great apes (especially gorillas) and what type of management should be carried out there. The areas covered included what would soon become the Deng Deng National Park, the existing Communal Forest of Belabo, and a large logging concession, UFA 10065. The results helped to locate where the main populations of gorillas resided.

In early 2010, as a function of the results of the earlier studies, the Deng Deng National Park was created (Décret No 2010/0482 pm du 18 Mars 2010 portant création du Parc National du Deng Deng), covering 523 km2. To estimate great ape density, especially gorillas, a transect-based survey was carried out by WCS Cameroon, covering the areas where they were known to occur, i.e. the park south of the Lom River, and the northern part of the adjacent logging concession UFA 10065, which seemed to be the stronghold of the apes in these forests. Survey methods followed the IUCN Best Practice Guidelines and are standard for great apes (Buckland et al. 2001; Kühl et al. 2008; Maisels 2008; Maisels et al. 2008), using a combination of the DISTANCE and ArcView computer programs (ESRI 2000; Thomas 2009). A survey design was drawn up that covered the park and the north of the logging concession, with a total effort of 136 km of transects. The survey team comprised the experienced wildlife team leader Rufin Ambahe, who had been trained in a 10-week intensive university-level training course in 2005 (Maisels 2005), and experienced local assistants. A total of 100 ape nest sites (312 individual nests) were recorded, of which over half were definitely made by gorillas.

Gorilla nest site density was relatively high: 49 sites/km² (95% confidence limits 29-84; c.v. 27%). We used a very conservative decay rate of 221 days, which suggested that overall gorilla density was about 0.67 (0.39 to 1.17), translating to about 540 (311 to 948) gorillas in the whole area studied, divided roughly equally between the park and the logging concession. Thus, even using the smallest number of gorillas calculated for the whole area (311), if half of them are in the park, then there are at least 150 gorillas in Deng Deng National Park and another 150 in the area of the concession that was surveyed. Gorilla nest group encounter rates - and indeed estimated gorilla densities - were comparable to some of the (unhunted) national parks in Gabon (see Aba'a & Bezangoye 2007; Bezangoye & Maisels 2010; Maisels et al. 2010).

WCS is grateful to Cameroon's Ministry of Forestry and Wildlife, and the French Development Agency AFD for working to protect the gorillas over the past 3 years.

Dedicated to
Ymke Warren, who organised the Deng Deng recce surveys which resulted in the creation of the Deng Deng National Park in Cameroon. She loved gorillas and the forests, and will be remembered by everyone who worked with her.