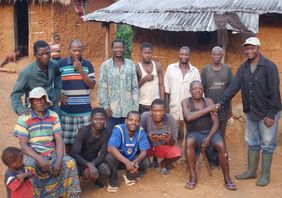 The Cross River gorilla (Gorilla gorilla diehli) is Critically Endangered, with perhaps fewer than 250 individuals remaining within their range, which occupies a small area of forests straddling the border between Nigeria and Cameroon. Until 2008 the entire population of remaining Cross River gorillas in Cameroon occurred outside of any existing protection area, and despite recent successes that resulted in the creation of two new protected areas (Takamanda National Park and Kagwene Gorilla Sanctuary) there still remain a significant portion of gorillas that inhabit forests outside these protected areas.

Surveys have revealed that perhaps as much as half of Cameroon's gorillas inhabit forested areas that are under no formal protection. Therefore it is critical that some kind of conservation management strategy is implemented to bring as many of these unprotected gorilla groups as possible within some form of protection. However many of these sites are difficult to access, due to their remoteness and the ruggedness of the terrain, posing a problem for conducting survey work and ongoing monitoring. Government also has very limited capacity to mount protection efforts in many of these areas. As a result of these challenges the "Gorilla Guardians", a community-based monitoring network, was initiated in 2008 as a means of stimulating the involvement of local communities and enlisting them in gorilla monitoring and conservation.

The main objective of the Gorilla Guardian program is to engage the cooperation of the leaders of communities with traditional rights over unprotected forest areas where Cross River gorillas are known to occur, and to collaborate with local hunters, to gather information related to Cross River gorilla distribution, status, and threats. The information gathered is then used in supporting Cross River gorilla conservation, awareness-raising, and conservation planning. Gorilla Guardians are selected by their communities and undergo training in gorilla ecology and nest identification, monitoring and data collection, and Cameroon wildlife law.

They serve as conservation ambassadors in their communities, and carry out monitoring of gorillas and of illegal activities. Since the establishment of the program, Gorilla Guardians working in collaboration with local hunters have recorded observations and collected data that have provided updated distribution information for gorillas in each site. In their role, Gorilla Guardians act as liaisons between their communities and government to gather vital data, forming a network for sharing information and raising awareness.

The program was formally established in January 2009 with the selection and training of the first 6 Gorilla Guardians from communities (Ashunda, Bachama, Awuri, Takpe, Mbu, and Nga) in three main forest areas adjacent to important Cross River gorilla sites - Mbulu forest, northern Mone forest, and Mawambi Hills. In 2011, two additional communities were added to the program with the inclusion of Eshobi and Kunku located between Mbulu and Mone forests, filling in a critical gap in the landscape.

Continued interest in the program by other communities in the area permitted the expansion of the program to the eastern side of Mone forest. In January 2012, Gorilla Guardians from Amebishu and Batambe underwent training and began collecting data in March. There are plans to continue to strengthen the program before the end of 2012 with the selection and training of a new Gorilla Guardian from Mantoh village, on the eastern side of Mone forest, and assessing the interest of additional communities near critical gorilla habitat in joining the network.

Through the community-based monitoring conducted by the Gorilla Guardian network, a total of 661 nest sites containing 3,667 individual weaned Cross River gorilla nests have been recorded since the inception of the program. The details of this data combined with additional observations made in the field are permitting us to make better estimates of the numbers of gorillas that inhabit these forests and to better understand how they are distributed in this section of the landscape. As a result of the Gorilla Guardian monitoring we have much more accurate estimates of the group numbers and movements. Current estimates indicate that there are possibly 29 gorillas inhabiting the Mone Forest Reserve, 22 gorillas in the Mawambi Hills, and 14 gorillas in the Mbulu forest. Mapping of the nest site data along with reports from hunters has revealed that gorillas are moving in areas outside of the previously described distributions. Continued monitoring should allow us to determine if this is a temporary movement or if gorillas are beginning to move back into forested areas that were part of their historical range.

The original goals of the program were 1) to collect more regular data on the status and distribution of gorillas; 2) to serve as a link between conservation authorities and the communities, particularly to act as informants reporting threats to gorillas (and chimpanzees); and 3) to build awareness within their communities and serve as a source of information regarding conservation issues. The Gorilla Guardian network has shown itself to be a very effective means for collecting data and involving communities in the monitoring of Cross River gorillas. With regard to the first two goals, the network has provided a wealth of knowledge related to the status and distribution of less-known gorilla groups. It has proven itself to be a cost-effective and efficient way of monitoring the most vulnerable and remote gorilla populations.

A result of these measures is that no hunting of Cross River gorillas has been reported since the inception of the program in January 2009.

Monitoring by the Gorilla Guardian network and its continued expansion to additional villages have created a true community-based conservation program where local communities are actively participating in conservation actions. These actions are working to ensure a future for Cross River gorillas and other species along with the forests that both humans and wildlife depend on.

We are grateful for the past and ongoing financial assistance received by the program from the US Fish and Wildlife Service, the Margot Marsh Biodiversity Foundation, and Berggorilla & Regenwald Direkthilfe.