Gorilla Census in the Virungas 2010 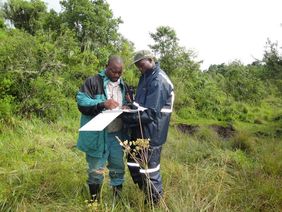 Recently, I spent 10 days in the field as part of a team counting mountain gorillas during a 2-month census which took place from 1st March to 25th April 2010 in the Virunga Volcanoes Massif shared between the Democratic Republic of the Congo, Rwanda and Uganda. The last census of gorillas in this site took place in 2003; it was therefore high time to redo the count to get an idea about the current state of conservation and the size of the population of mountain gorillas living in the Virunga Massif, after almost 7 years. Two years ago it had been planned to conduct a census, but because of the insecurity due to the war in the area, the exercise could not be done.
To properly carry out the census of mountain gorillas, the Virunga Massif had been divided into several sectors to facilitate the counting and communication between different teams participating in the census. I would like to share my experiences during the 10 days of intense field activity I spent in counting different mountain gorilla families, living in two sectors nears Bukima and Bikenge ranger outpost between Mounts Karisimbi and Mikeno of the Virunga Massif, that were allocated to the team to which I belonged.
We arrived late in the afternoon of March 15th, 2010, at the edge of the gorilla habitat in Bukima ranger outpost, and we decided to spend the night at the ranger outpost to prepare for the long trip the following day to Mwinaniro camp, located at about 3 hours' walk in the forest, a site strategically chosen to facilitate counting in remote areas farther from the park edge.
The next morning we started our journey to Mwinaniro, around 6:30 a.m., after a quick breakfast, and we arrived at the camp around 10 a.m. Soon after arriving, we decided to do some field explorations. After a few minutes' rest, and having set up our tents, we divided into two teams of 5 persons as originally planned, and each team left to cover part of the chosen sector.
The census teams followed a reconnaissance route, using trails made by elephants, buffaloes or trackers until we discovered a fresh trail of gorillas that we followed to the nest site where we would count nests and assess the composition of the group. In each nest, we proceeded at the same time to collect fecal samples for DNA and parasitological analysis.
Gorilla census work is a very exciting exercise - and very tiring. It provides spectacular views from the mountains of the Virunga Massif, and requires great physical effort to climb the hills and mountains and slide down the broad valleys in search of gorilla nests. We used compasses, georeferenced maps and effective GPS to navigate and physically position ourselves throughout the census.
We left the camp very early in the morning, combing vast areas throughout the day, and came back late in the evening exhausted. During these long walks in the forest, we found ourselves putting up with all the difficulties that the jungle had to offer - very painful itching leaves, irritating nettles, the bites of safari ants, and often being hijacked by buffaloes or elephants; when they blocked our route, we were obliged to slow down and wait until they went away in case aggressive males decided to defend their groups.
The Virunga Massif is well known for its aridity, with little streams and impounded water on the surface due to the high porosity of the volcanic soil with little surface water. Even during the rainy season, there are only small marshy areas that retain water. Water is therefore a scarce resource in the massif, and one is required to carefully manage the water supply to survive: in the jungle of the Virunga Massif, you may travel long distances for several hours without finding a single water source. Faced with a situation like this, park trackers have developed methods of coping while operating in the mountains.
During the rainy season, rainwater is retained in bamboo trunks through several pores hollowed by insects, and trackers use this water to slake their thirst. In the bamboo forest, I have often seen our trackers screening bamboo shoots and choosing those they knew would contain water. Using their machetes they would make a small slit in the trunk and drink before continuing onward on the fixed itinerary. I found this a very interesting experience, and used it as an adaptation skill in other sites without enough water sources.
During our 10-day stay in the field, our two teams sharing the same camp were able to identify 4 different gorilla families, each consisting of several individuals. The exact composition of each family is to be confirmed later by the DNA analysis of the fecal samples collected from different individuals. After having identified them, the organizers of this census, led by IGCP (International Gorilla Conservation Programme) in collaboration with conservation partners, among them the authorities for protected areas (ICCN - Institut Congolais pour la Conservation de la Nature -, UWA - Uganda Wildlife Authority -, RDB - Rwanda Development Board) and international conservation NGOs and institutions involved in this census (DFGFI - Dian Fossey Gorilla Fund International -, MGVP - Mountain Gorilla Veterinary Project -, and the Max Planck Institute for Evolutionary Anthropology) will officially communicate the number of gorillas found in each sector.