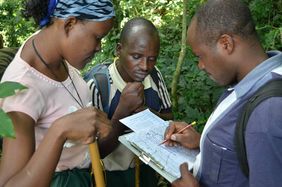 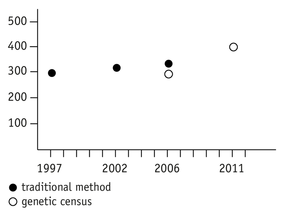 A census of the gorillas in Bwindi Impenetrable National Park conducted in 2011 confirms a minimum population of 400 gorillas, raising the world population of mountain gorillas to 880. While it was initially planned to include Sarambwe Nature Reserve in Congo, it was not possible to do so due to insecurity in the Sarambwe area at the time of the census. The results could not be released earlier because samples taken during the census were analyzed genetically, which took a long time.

The increase in the Bwindi population since the last census, from 302 in 2006 to 400 in 2011, is attributed to improved censusing techniques as well as real population growth. During two sweeps of Bwindi the census teams could find more gorillas than during a single sweep; it is likely that some gorillas were missed in the 2006 census. But all signs are that this gorilla population is indeed growing.

The 400 gorillas in Bwindi Impenetrable National Park form 36 distinct social groups and 16 solitary males. Ten of these social groups are habituated to human presence for either tourism or research. This were, at the time of the census, 168 gorillas or 42% of the Bwindi population.

From an IGCP Press Release

The census was conducted by the Uganda Wildlife Authority with support from l’Institut Congolais pour la Conservation de la Nature and the Rwanda Development Board. It was also supported by the International Gorilla Conservation Programme, the Max Planck Institute for Evolutionary Anthropology, Conservation Through Public Health, the Mountain Gorilla Veterinary Project, the Institute of Tropical Forest Conservation, and the Dian Fossey Gorilla Fund International. It was funded by WWF-Sweden with supplemental support from Berggorilla & Regenwald Direkthilfe, the Wildlife Conservation Society, and the Max Planck Institute for Evolutionary Anthropology.